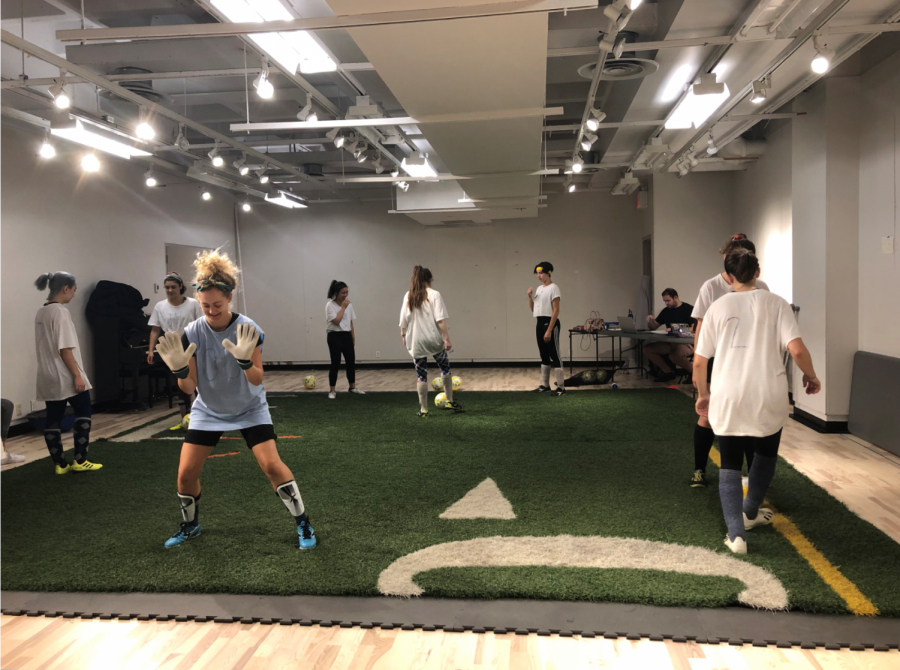 Practice makes perfect: The cast of "The Wolves" practices soccer skills in rehearsal. The lessons they learned in the process applied to their own lives; Amanda Morrow, who plays #25, said, “She has taught me how to be strong.”

If you walked into Franny’s Space recently, you might wonder whether you were in the right place. In the brightly lit room, girls clad in patterned knee socks, cleats and oversized jerseys dart across a turf rug, dribbling multiple soccer balls. The group tackles a variety of soccer drills as they engage in complex conversations.

Though understandable to mistake this scene for a high school soccer practice, this team is practicing more than their footwork. The all-female cast is kicking off Fordham Theatre’s mainstage season with Sarah DeLappe’s “The Wolves.”

According to Fordham News, the contemplative 2016 play depicts “the experiences of high school girls through their weekly Saturday morning pre-game soccer warm-ups. From the safety of their suburban stretch circle, the team navigates big questions and wages tiny battles with all the vim and vigor of a pack of adolescent warriors.”

“It excited me to see exclusively women on stage, but more importantly, seeing those women portrayed with such strength and guts and wit,” said Spenard. “I had never come across a play like it before and thought it would be great for Fordham to be a part of the brewing revolution of bringing more and more female characters to the stage.”

Director Alicia House and assistant director Leigh Melillo, FCLC ’22, approached the play as a candid look at society’s perception of teenage girls, intending to capture each character as a real young woman. Both House and Melillo cited American author Lorrie More’s quote as a source of inspiration during the process: “I sometimes think of female adolescence as the most powerful life force human nature has to offer.”

“This play is really just teenage girls as they are, as opposed to what we want them to be. Teenage girls have so much passion,” Melillo said. “They have so much drive to do things. They freaking crash websites to buy band merch … Imagine if we weren’t shied away from politics or the sciences so early on; where would we be?”

One unique aspect of the piece is how the team players are referred to by their jersey numbers rather than their actual names. This allows anyone to play the roles and increases the relatability of the team players for the audience and cast members alike. As team captain #25, Amanda Morrow, FCLC ’22, conveys persistent leadership which, she admits, is not a particularly familiar position for her. She credits #25 in helping her to find her voice and tap into newfound power.

“#25 is definitely a character and a person that I’m going to keep with me for the rest of my life,” Morrow said. “She has taught me how to be strong, how to be a leader and how to make friends.”

Victoria Fanning, FCLC ’22, also found herself learning lessons from her character, #46, the new girl who desperately wants to be liked by the team. Of the experience, she said, “It’s been really interesting to try to find a balance between #46’s confidence in herself and her knowledge of the world with her want to be accepted. That want of acceptance is something that every single one of us has been through and will continue to go through as women and as people. What I’ve learned is how to be comfortable with silence and how not to feel the need to fill the space.”

Ella Stoller, FCLC ’20, especially related to the perfectionism of her character, #00. “In high school, I definitely experienced wanting to be perfect,” she said. “I think that’s something all young women are handed, like, ‘Here’s your cookie-cutter; hope you fit in it.’”

Stoller noted that the play works to defy audience expectations of the team players. Grateful for this fresh perspective, she said, “It’s really cool that we get to be in a space where we see the reality of what it means to be a young woman coming of age in this country.”