The Lumineers Premiere ‘III’ at Pier 17 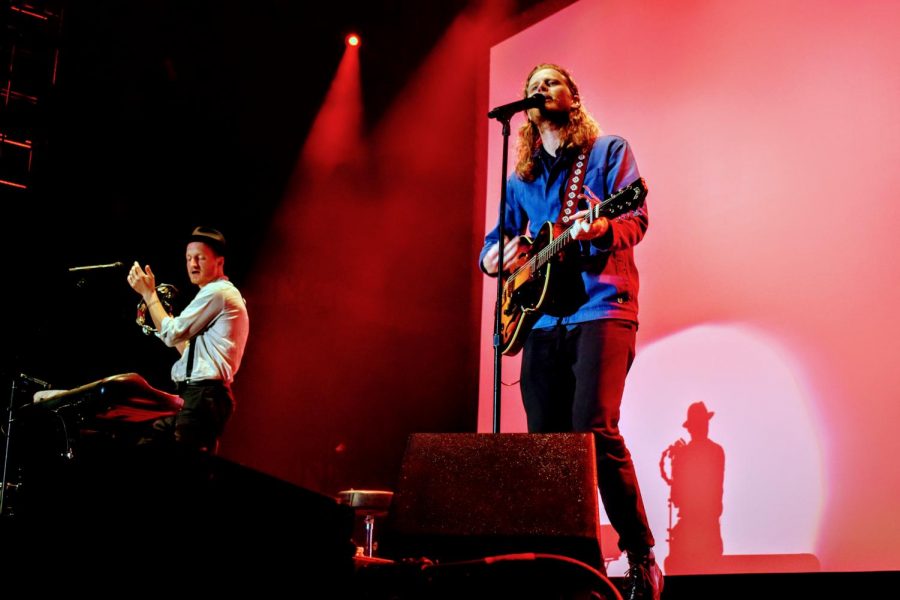 The Lumineers debuted the accompanying film for their newest project, “III” in New York with an acoustic performance following the film.

Denver folk band The Lumineers, two-time Grammy nominees, came back to their old stomping grounds in New York to debut the accompanying film for their newest project, “III.” After the successful release of two platinum albums (the self-titled “Lumineers” and “Gloria”), the duo produced a touching and heartbreaking 10-track album. Lead vocalist Wesley Schultes and drummer-singer Jeremiah Fraites drew inspiration and produced the music and storyline based off their own family experiences with battling addiction.

The U.S. premiere of “III”’s visuals were held on the Rooftop at Pier 17 downtown by South Street Seaport. Compared to the previous day, which was sunny and 80 degrees, it was terribly cold and rainy the day of the premiere.  The crowd by the stage braved the weather for two hours in their ponchos waiting for the film to begin. People were cold and soaking wet from the rain. Although the conditions were not great, there was a resilient spirit in the air and this resilience was eventually rewarded by the captivating ending of “III.”

When the film began, everyone in the space went silent and the only things that could be heard were the movie’s sound and the rain pouring down. The moody weather coinciding with the intense film made for the perfect storm.  People held their breath at the start of each scene and cheered at each scene’s end.

The visuals showcased during the premiere reveal the final chapter out of three. Shot in Portland, Oregon, the story is told through three generations of the working-class Sparks family, who have a history of battling with addiction. Since the storyline and the 10-track album were inspired and written by Schultz and Fraites’ own family experiences with addiction, the band consciously chose to not use relatives’ real names in the storyline.

The Sparks family consists of the matriarch (Anna Cordell), the son (Nick Stahl) and the grandson (Charlie Tahan). The film gives an inside look into the lives of these three family members and how their dependence on drugs and alcohol leads them down a pattern of psychological and physical abuse. The portrayal reveals the harsh realities faced when battling addiction. In the film, the three family members use alcohol and drugs to numb the pain of individual loss.

During a post-screening Q&A, Schultz explained that for the videos, they did not want to zero in on the band. When creating the music and film, according to Schultz, “the band wanted to focus on summoning a feeling that you have about something.”  Even though the film doesn’t focus on the band, Schultz said that they do take part within the film, supporting the characters and serving as Easter eggs for the audience. As well as talking about the film, they reminisced about their time in New York before their crazy musical adventure. Schultz and Fraites talked about their past experiences traveling back and forth between New York and New Jersey, commuting over the George Washington Bridge. From the Q&A, fans saw that the musicians’ early struggles inspired a lot of the music they create. Their experiences not only allow them to create, but keep them grounded in their work.

After the Q&A, the two band members went into their acoustic performance and the audience sang along to their hit songs, “Ophelia,” “Ho Hey,” “Cleopatra,” “Sleep on the Floor” and their newest songs of “III,” such as “Life in the City” and “Gloria.” Since the crowd waited for a long time in the pouring rain, they did the most fitting encore song: “Have You Ever Seen the Rain” by Creedence Clearwater Revival. The rendition closed off the night and put an end to the deeply intimate experience that was initially created through the premiere of the film.