‘Somos Más’: An Exploration of Immigration and Assimilation 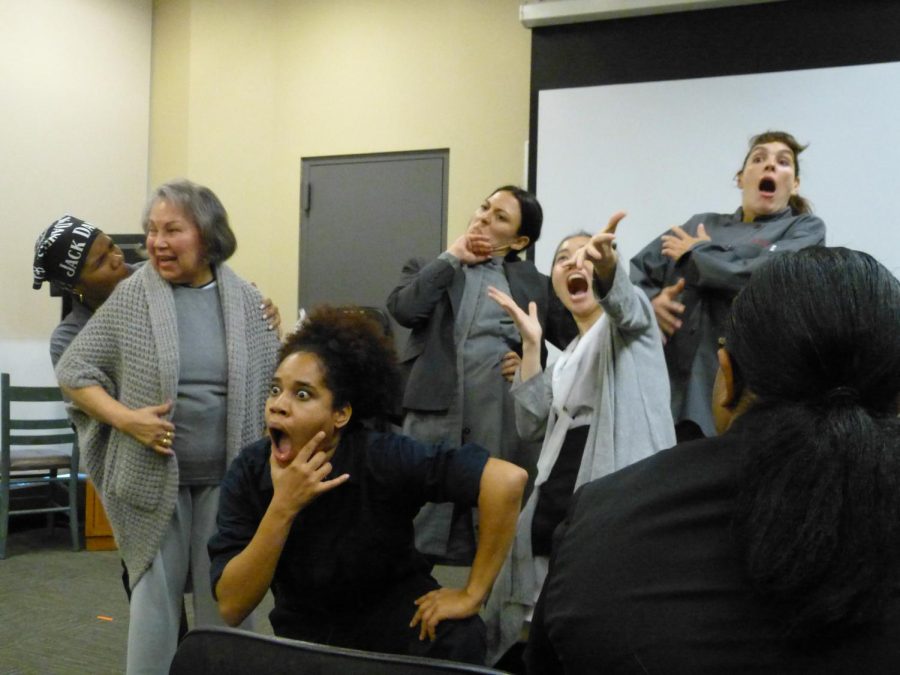 The all-immigrant cast of "Somos Más" performed about, and later discussed with the student audience, what it means to be American without sacrificing their heritage.

Sitting in my second-row seat in the South Lounge, I was surrounded by a frenzy of women in gray walking erratically and puzzled viewers trying to navigate around them, get a seat and figure out what the women were doing. The actors would stop in front of random audience members and exclaim phrases like, “How are you?” “Does that make sense?” and “Thank you very much!” as if they were preparing for a job interview.

After I had been sitting down for a few minutes, one woman sat down next to me and said with bright eyes, “I’m sorry, but can you hold this ring for me?” As she placed it in my hand, she explained with a fair amount of nostalgia that she bought it 10 years ago in Colombia. It was one of the few material things that she had from her home country, and she needed me to hold on to it and do everything in my power not to lose it. After I reassured her multiple times that I would protect it, she smiled, thanked me and walked away with urgency, continuing her routine of walk, stop, exclaim.

So began “Somos Más,” an interactive performance by the People’s Theatre Project, an organization based in Upper Manhattan that creates plays by and for immigrants. Its purpose is to tell their stories and encouraging pride among their communities. The company was brought to Fordham as part of Career Services’ Global Diversity and Inclusion Programs, and the performance was co-sponsored by Career Services, the Office of Multicultural Affairs, the Center for Community Engaged Learning, and the Sociology and Anthropology Department.

After about 15 minutes of high- energy, brisk walking, a male voice came over the loudspeaker, propelling the six girls to get into a formation and brace for their first test in becoming a citizen. The women were all different ages from all different Latina, Asian and African backgrounds, some who have been living in this slightly more dystopian version of the United States since they were little and some who have just arrived. Here, a point system is used to “upgrade” immigrants to citizens, and points are rewarded based on how “American” you become or how well you have assimilated and suppressed your home culture and memories.

To speak their first language, commemorate their old life or feel nostalgia of any sort was a crime (police sirens would ring whenever an actress slipped). And it seemed that no matter how hard they worked, or how much of their past they had forgotten, there was no break from the testing or trying to fit in.

Over the course of the show, each actress told their story and the impact of this brutal version of assimilation on their lives. They band together at the end, protesting that they can be a part of this society without throwing everything from their old lives away.

In the talkback after the show, the director Zafi Dimitropoulou (who stepped in for the male character’s role at this performance) explained the creative process behind the show. She held group auditions, only accepting actors who were immigrants. The cast ended up including five women and one man of all different backgrounds, with three female understudies. Each character is based on the actor’s actual heritage, and the show changes to fit that authentic mold whenever an understudy comes on. At this performance, the Mexican Greek Dimitropoulou stepped in for the role usually played by the Iranian actor, so the character became Greek.

The research process was also done together as a group. It consisted of visiting New York museums, people-watching on street benches and spending time getting to know each others’ stories.

She opened the floor for questions and comments from the audience. The feedback was mostly positive, and the talkback started a conversation about what moments of the show really touched each person. Many saw their story or their parents’ story of coming to the United States and learning to assimilate as a means of survival. In order to be successful in this country, you had to lessen your accent, ignore your heritage and line your life up perfectly with the current version of the American dream.

The main takeaway for the audience of this show was to understand the struggle of immigrants then and now, but it is a show meant to be seen by immigrants. It becomes a means of emotional catharsis, to see that their everyday struggle is heard and appreciated on stage by others who have gone through the same experience as well.

A previous version of this article omitted the sponsors of the event. It was updated to include this information on October 8, 2019.