Football Figures it Out For First Win 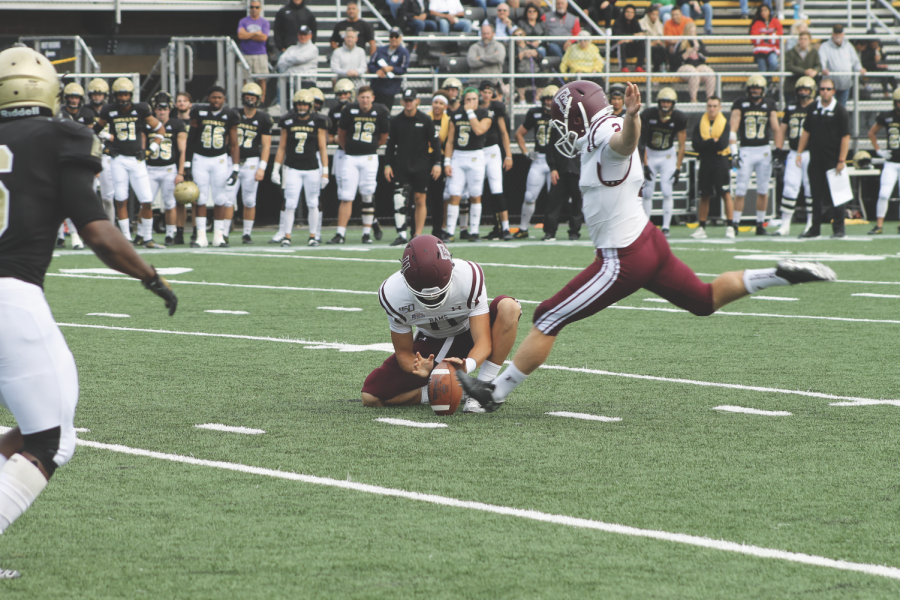 Andrew Mevis, FCRH ’21, kicked three field goals against Bryant, two in the second quarter to keep the Rams in contention.

It is difficult to know if anyone saw this victory coming. Despite a difficult start to the season, industry analysts still considered Fordham a favorite in their third game. The 2019 Bryant team was no longer the impressive force it had been last season, and their offense had been sputtering for most of the game. Their 14–6 lead over the Rams going into the fourth quarter was tenuous at best.

But what transpired over the next 15 minutes of play shocked every analyst and fan alike. Fordham put on an offensive display, scoring 23 unanswered points on the way to a suddenly decisive victory. Their path to this unexpected result was a tumultuous one.

Fordham began their season with a heartbreaker and a thrashing. In their first week, a hard-fought battle with Central Connecticut State came down to the final play. The Blue Devils scored on a field goal as time expired to give Fordham a 26–23 loss.

While the dashed hopes of their first week may have disappointed fans, at least Central Connecticut State gave Fordham an opportunity. The Ball State Cardinals provided no such opportunities in their second game. After a closely contested first quarter, they outscored the Rams 43–15 over the next three quarters to run away with a 57–29 victory.

After a 0–2 start, it was clear that Fordham would have to turn their fortunes around quickly against Bryant University. Last year, such a feat would have been far more difficult. Bryant began their 2018 season hot, going 5–2 through their first seven games before tailing off as the season went on. That decline continued into the 2019 season, and the formerly accomplished Bulldogs found themselves in the same position as Fordham with a 0–2 record. For both sides, this was a must-win game.

The first half was an evenly fought defensive battle. Bryant drew first blood in the opening quarter when it ran in a touchdown on its second drive, and in those first 15 minutes, Fordham’s offense was largely shut down. The roles reversed in the second quarter when Bryant’s offense struggled and Fordham kicker Andrew Mevis, Fordham College at Rose Hill (FCRH) ’21, managed to convert two field goal attempts into points to make the score 7–6 going into the half.

Despite staying in the game through several impressive defensive stands, Fordham’s offense was unable to find the end zone in the first half, and those struggles continued into the third quarter. Quarterback Tim DeMorat, FCRH ’22, threw his fourth interception of the season, and two additional Fordham punts indicated a lack of offensive firepower. Meanwhile, Bryant managed to lengthen their lead on a 38-yard touchdown, putting the Rams down eight points as the third quarter drew to a close.

After three quarters of offensive inefficiency, it would be very difficult to predict what would come next. Starting the fourth quarter with the ball, running back Zach Davis, FCRH ’21, led the Rams downfield, setting up another field goal for Andrew Mevis. Fordham had the ball back almost immediately after their stout defense forced the Bulldogs to punt. Two minutes later, DeMorat connected with receiver Fotis Kokosioulis, FCRH ’22, for a 45-yard touchdown, and while the subsequent two-point conversion failed, it gave the Rams their first lead of the game, 15–14.

Bryant’s attempt at a comeback was meager. Their offense was only on the field for one minute and six seconds before they were forced to give the ball back to the Rams. On this Fordham drive, DeMorat was hardly even needed under center. Davis rushed twice for 6 yards, and his third run went for 48 yards and resulted in another touchdown for the Rams. The entire drive took only 23 seconds.

To put the final nail in the coffin, DeMorat decided to rest his arms and use his legs instead. As the game wound down, the quarterback ran for a 20-yard touchdown to turn a formerly close game into a blowout, 29–14.

At the end of the day, DeMorat threw for 187 yards and scored one touchdown through the air and another on the ground. Davis ran for 140 yards and a touchdown as well, serving as the major catalyst for Fordham’s fourth quarter resurgence.

The Rams ended a game that consisted mainly of overlong drives and inefficient offensive play by rapidly striking against a Bryant defense that could neither rest nor regroup. The Bulldogs’ offense could not stay on the field for long, and their defense cracked under the continued pressure of players like DeMorat and Davis.

It is unclear if this is the beginning of a new and exciting Fordham team or a fluke performance against a weak and poorly conditioned opponent. The one thing that cannot be questioned is that the Rams’ performance in the fourth quarter was exciting and satisfying, and Fordham fans will be overjoyed to learn that those adjectives have once again entered the lexicon of their football program.