Independent from Fordham, the record label launches the careers of student musicians 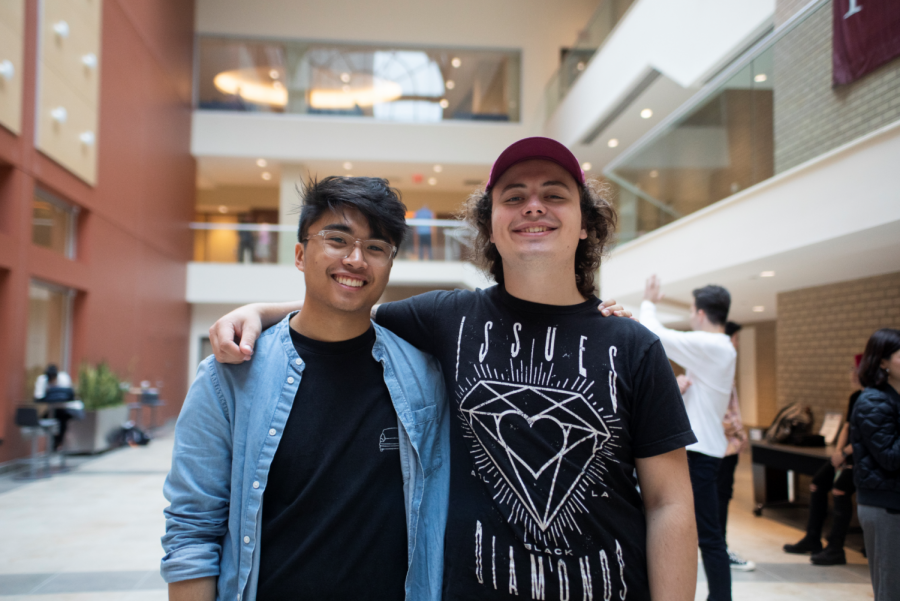 Seniors Jordan Meltzer and Paolo Estrella are the founders of Ramses Records.

By MILEY CAO and GABRIELLE DINIZO

Ramses Records, Fordham’s new unofficial record label, was warmly welcomed to the Ramily this past week with a launch party in Platt Court on Friday, Sept. 6. The gloomy rain did not dampen the party, made a success thanks to the students in attendance sharing pizza and their thoughts on the label.

The launch party reflected the label’s mission to bring students together with music. Several in attendance expressed their enthusiasm for the project, the latest in a host of student-led activities on campus this year. Based on the buzz among students, Ramses Records is an exciting addition to campus, not just because of the student music on the way.

The founders of Ramses Records — Jordan Meltzer, Gabelli School of Business (GSB) ’20, and Paolo Estrella, GSB ’20 — have invested considerably in the project.

“It’s been a lot of time, effort and money,” said Meltzer. “We couldn’t feel happier.”

The founders have an extensive musical background, with a combined resumé featuring internships at major record labels and their own musical projects. Meltzer is an intern at Universal Music Group and Island Records. Estrella, who has been singing since he was three, also interned at Universal Music Group. The duo brought together a growing team of 11 students, each specializing in a different piece of the project. Their combined knowledge paired with their passion for the business make them the newest unstoppable leaders on campus.

They hope to see the Fordham community embracing and supporting the student artists on the label. “The goal is to connect artists together,” Estrella said.

Meltzer hopes to see the label continue for years past his Fordham career. “Fordham has a lot of talent, which people take for granted,” he said.

Meltzer and Estrella agree that Ramses Records is strictly about the music, unity and community. “This is very DIY,” said Meltzer.

The artists signed by Ramses Records will collect all streaming profits, and the label plans to spotlight artists, book shows and create a missing community on campus to celebrate music and support artists.

The label’s first signed artist is Teymur Guliyev, Fordham College at Lincoln Center (FCLC) ’21, known to fans and classmates alike as simply “Teymur.” Originally from Azerbaijan, Teymur grew up in New York as a child performer, acting in off-Broadway shows and even performing on David Letterman. His father is a painter and sculptor who leads his life with a passion for the arts. This lifestyle influenced Teymur’s desire to speak and sing with confidence. “My father always pushed me but gave me the space to follow my own passions,” he said.

Teymur is a self-taught artist and first began making music at age 15 on the digital music program GarageBand. His first album, “Three,” was written, produced and released in 2018, featuring “Bonnie and Clyde” and “For You//A Lullaby.”

Chesca Mac, FCLC ’21, is an NYC-based singer-songwriter who has been writing her own music for 10 years. Mac grew up as part of a musical family in New Jersey, taking piano and guitar lessons alongside her siblings and rarely finding her house without music playing. She draws inspiration from artists like Bruno Major and Norah Jones, and Mac herself aims to “connect with others” through her own music. Her singles “After All” and “Life” are out now, and all her music is available on all streaming platforms.

The third label signee is singer-songwriter Chris Parkin, FCLC ’21. Parkin’s musical spark was ignited early as he began taking classical piano lessons at age three in his hometown in Cape Cod. Not satisfied with mastering just one instrument, Parkin took up the violin in the third grade. In the fifth grade, he began taking fiddle lessons, which he opened him up to new styles of music. He took his fiddle skills to local pubs in both Cape Cod and New York City, playing Irish tunes and jigs. While he began singing with the choir in his high school years, it wasn’t until college that he said he really fell in love with singing. He is currently working on an EP with Ramses Records.

“There is more stuff coming. People should get excited,” said Teymur. “This is a great project that I think will bring new energy to Fordham.”

A previous version of this article misstated Estrella’s college and internship. It has been updated to correctly reflect his information on September 18, 2019.