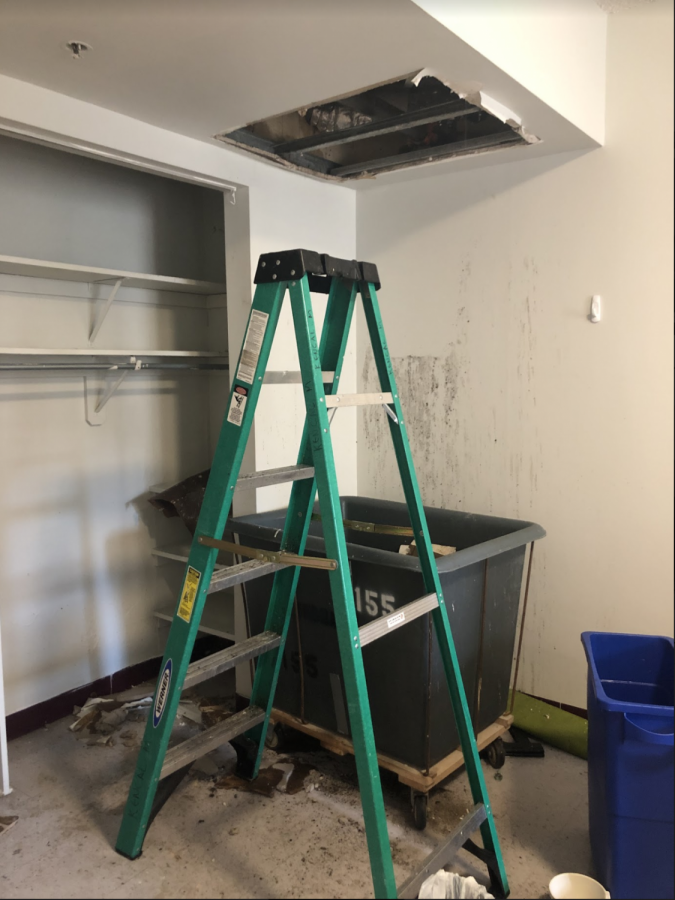 Emergency pipe burst leads to facilities, public safety and a plumber being brought on scene.

On Sept. 8, 2019, an internal plumbing issue in McMahon Hall resulted in a pipe leak in one dorm, displaced students and restricted running water access throughout the building.

Carlotta Santoni and Julia Britto, both of Fordham College at Lincoln Center (FCLC) ’20, experienced the pipe burst in their 10E bedroom that morning, after noticing a minor leak on Santoni’s side of the closet space on Saturday night. By Sunday afternoon, the leak moved to the in-room sprinkler, before part of the ceiling split and bacteria-concentrated water flooded in.

“The issue was contained to my side of the room, but it stretched from the closet to the air conditioning unit,” Santoni said.

Jed Appleton, from facilities and management at FCLC, said that the mainline connecting all running water appliances — toilets, showers and sinks — experienced a clog. According to Santoni, the maintenance crew in her room estimated that the blockage could have been as large as 25 ft. lodged within the building’s 4-inch pipes. That claim was not confirmed.

“Definitely the initial problem was a mainline clog coming down one of the risers,” Appleton said. “In McMahon, like most residential areas, you have a lot of risers that go from the ground floor all the way up. They call that a wet column; it’s inside the walls and usually bathrooms are back-to-back, going into one of these risers. In this case one of those risers got clogged.”

Due to the severity of the damage to the pipes, a plumber was also brought in to assist the facilities team address the problem.

“It was chaos,” Santoni said. “Facilities was working really hard, Public Safety was making announcements for residents to not use running water … it was just a big problem. It took them hours to unclog the pipes.”

“We do treat the pipes; we do preventative maintenance on them,” Appleton clarified. “We just have a whole bunch of kids in the rooms and anything can happen.”

Because of the damages the room had sustained, Residential Life temporarily relocated Santoni and Britto to an emergency space in McMahon to stay, which according to them was not clean upon their entry.

“The emergency space was filthy, after we’d been assured it would be clean and ready for us,” Britto said. “I was really stressed; all my clothes and supplies were in my room, but luckily a couple other friends really helped us out when we needed them.”

“We just stayed with friends on Sunday night,” Santoni said. “The room only accommodated me and Julia, but our other roommates couldn’t stay in our actual dorm because all of our belongings were scattered in the living room and the smell in the apartment was awful.”

The plumbing issues seem to have started in the room above Santoni and Britto as early as Saturday. 11E Resident Sarah Macy, FCLC ’22, stated that she and her roommates noticed that their kitchen sink was not draining properly, and that dirty water continued to rise from their pipes throughout Saturday.

“Whatever the clog was from floor 20 down was concentrated on floor 11 and then flowing down into our closet,” said Britto.

Macy said that facilities management was also in and out of her apartment all throughout the weekend trying to resolve the issue. While she and the rest of her suite were able to remain in their room during the maintenance, living conditions were not ideal.

They, like many other McMahon residents, received a series of emails regarding restricted water usage in their dorm sent in conjunction with several security announcements made over the dorm intercom system. At 4:25 p.m. on Sunday, all D-style and E-style apartments on floors ten through 20 were not permitted to turn on their kitchen faucets.

By 6:54 p.m., McMahon residents were not permitted to use any running water in their dorms. Students could not use their showers, sinks or toilets until 9:21 p.m., when a final email was sent informing residents that water usage may resume.

For Macy and her apartment, access to other living accommodations in their space was further restricted, as facilities workers took up much of their living room and kitchen with large machinery. According to Macy, it appeared to “redo and suck stuff out of the pipes.” In the end, she couldn’t make her own meals for the weekend and was forced to eat elsewhere.

“We felt bad, even though it wasn’t our fault,” Macy said. “We were just as confused as to why this was happening.”

Santoni and Britto were moved back into their room on Sept. 11, but now they face the issue of trying to get compensation for property that was damaged or lost.

“I lost all my chargers, that’s at least $200 off the bat, as well as all my shoes,” Santoni said. While she and Britto are in an ongoing conversation with Residential Life about insurance and compensation for the damages incurred by the flood, the FCLC Residential Life handbook does state that “The University cannot be responsible for any loss due to theft, fire, vandalism, accident or students’ negligence and does not provide insurance for personal property.”

The handbook also encourages students “to have their parents’ homeowner’s/renter’s insurance cover their personal property or obtain apartment insurance.”

One of Britto’s other concerns was ensuring that their room was safe to stay in again. “They obviously had to open the ceiling up to get access to the pipes, but we wanted to know if there was asbestos in the ceiling, since McMahon is kind of old,” she said. However, the Office of Residential Life assured the whole suite that because McMahon was built in 1993 after the ban on asbestos, they did not have to worry.

“I hope in the future, that this problem will be faster to fix and ideally won’t happen again,” Santoni said. “The building is very old so it’s likely these things happen but … this is a Fordham building that we expect to be safe in.”

Britto and Santoni were grateful for the assistance from facilities, but admitted that the process was a bit decentralized, with people often being kept out of the loop as the repairs progressed. “Maintenance and facilities were very good and responsive, but continued communication would have been really nice,” Britto said.

“If only it had been worked out a little faster, maybe the rest of it wouldn’t have happened,” she added.

“This could easily have been much worse,” Santoni said. “We really do appreciate everyone at Fordham who helped us out.”