"Pick the thing that you want to focus on and do that every day." 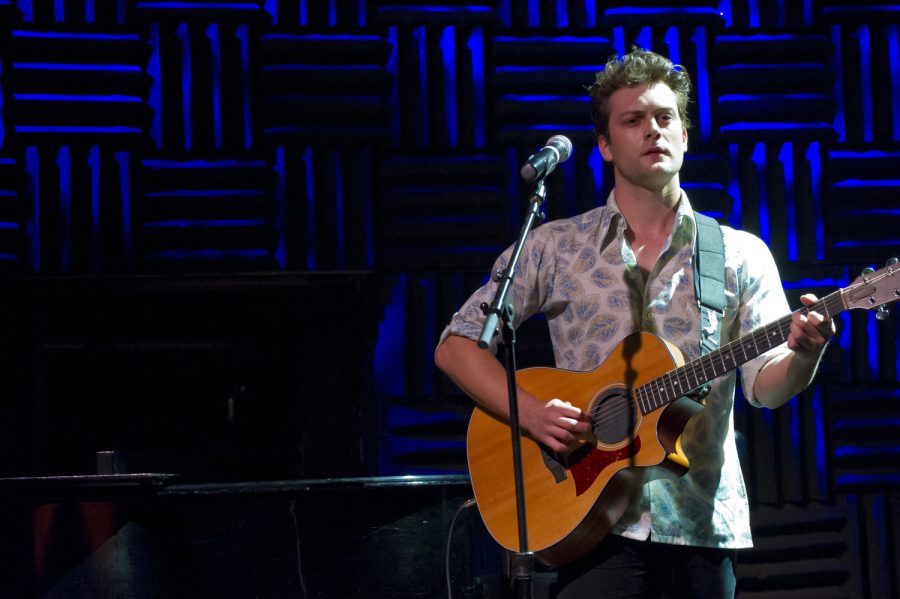 Hughes has many acting credits to his name, but the musician, composer and instrumentalist sees himself as more than just an actor,

Standing onstage beside Billie Joe Armstrong while headlining a musical arguably qualifies a person as “almost famous.” Van Hughes, Fordham College at Lincoln Center (FCLC) ’05, has earned that moniker — and he’s performing in it, too.

Hughes was recently cast in a new musical adaptation of the 2000 movie “Almost Famous,” about a young music journalist who gets swept up in a rock band’s inner circle. The show, produced in part by fellow alum John Johnson, FCLC ’02, will officially open at the Old Globe in San Diego, Calif., on Sept. 27.

Hughes plays Rolling Stone editor David Felton, among other ensemble roles. Since graduating from Fordham Theatre, he has also appeared in many touring, off-Broadway and Broadway productions including “Hairspray,” “9 to 5: the Musical” and most recently, Deaf West’s “Spring Awakening” in 2015. Above all those, he cited “American Idiot,” in which he starred as Johnny on Broadway and on a national tour, as his favorite project.

“I was the center of the show and I got to do it with Billie Joe Armstrong on Broadway, and my family got to see me do it,” Hughes recalled.

It would happen that, years later, “American Idiot” orchestrator Tom Kitt would write the score for “Almost Famous.” Hughes would be asked to “round out the cast” in two of its workshops, collaborating with Kitt once more and becoming part of a movie he “absolutely” loved in his teenage years.

The show is currently rehearsing in New York and will soon move to the West Coast to begin technical rehearsals. Hughes has drawn on even the most rudimentary of his Fordham education in the process.

“All the Acting I stuff — the physical storytelling and yoga, breath control, voice — I’m still using on a day-to-day basis, especially with musicals,” said Hughes. “I went in like, ‘I don’t even need to go to college, I’m just going to be an actor, get me to New York.’ But I’m a completely different person, and I can’t believe I thought that at 18.”

Nowadays, “just an actor” is opposite to how Hughes sees himself. He began acting at 8 years old after seeing child performers in community theatre in his home state of Virginia. He recalls feeling a strong sense of “belonging” that led him to delve into the world of theatre himself.

Soon after, he took lessons in piano, saxophone, clarinet and guitar. He began writing songs at age 13 and was part of a country rock band in high school called the Noodles. He now self-describes as a multi-instrumentalist, singer and writer as well as an actor.

“I don’t just see myself as solely an actor; I’m not putting all my eggs in that basket,” said Hughes. “It’s just nice to be able to use all different disciplines to fuel my artistic life; there’s never a time when it has to stop.”

These many disciplines keep him busy between acting projects. Hughes has been part of synth-pop band Teen Commandments for the last five years, and he composed a musical with them entitled “Burn All Night,” produced at American Repertory Theatre in 2017. Alongside “Almost Famous,” he is now composing a new musical called “Space Dogs,” about the dogs used to test rockets in Russia during the Russian-American space race in the mid-20th century.

Passion for his work is the main driver of all of Hughes’ projects. He said he wants to build a career not just for its own sake, but to make it a reflection of what he feels a connection with.

“The main thing I’ve learned is to not do anything that you feel compromises your time on this earth,” he said. “Even if the show doesn’t get made, I want it to be a worthwhile adventure.”

He offered similar advice to anyone pursuing a career in the arts.

“Pick the thing that you want to focus on and do that every day,” said Hughes.

“That’s a learning experience for the rest of our lives that will be shifting — what we want. But it’s a worthy quest to try to find that answer and go after it.”