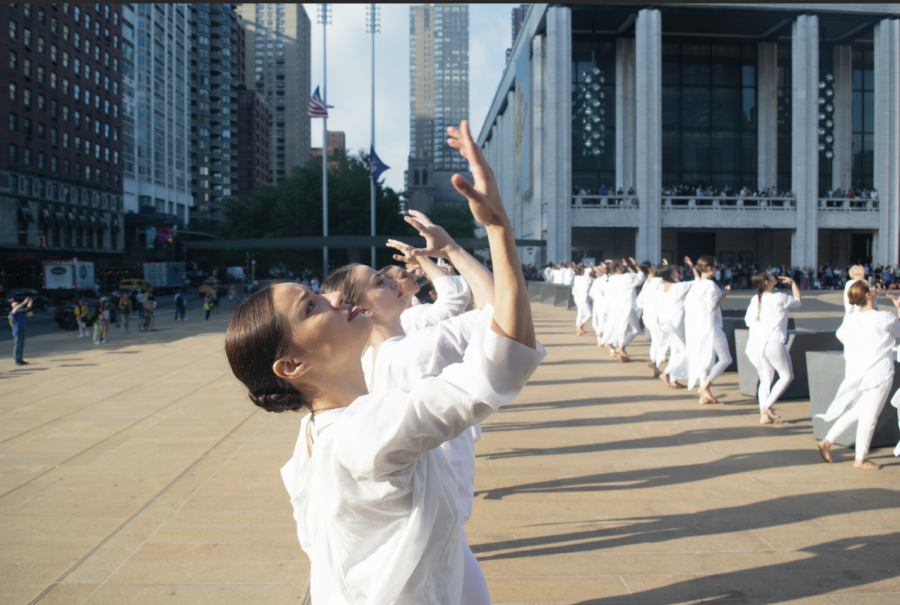 The dancers raised their hands for one minute of silence at 8:46 a.m.

2019 is the first year in Fordham history that students who remember the attacks on 9/11 mourn alongside younger students who were born after the event. Eighteen years after the tragedy, Fordham students found their own ways to honor the 2,977 victims who were killed on Sept. 11.

At 8 a.m., over a hundred city-goers took time out of their morning commute to gather at the Josie Robertson Plaza at Lincoln Center to observe the Table of Silence Project. The tribute is an annual dance performance that was conceived and choreographed by Jacqulyn Buglisi, chair of the Graham-based Modern Department at The Ailey School and a faculty member since 1988.

At 8:20 a.m., 150 dancers, including many Ailey students, took to the plaza. Dressed in white robes and accompanied by singers and musicians, the performance was marked by the sounds of the Upper West Side traffic, an inherent feature of the outdoor venue.

Aitana Jordan, Fordham College at Lincoln Center (FCLC) and Alvin Ailey ’21, said that after she met individuals who had been directly impacted by 9/11, she felt much more connected to the tragedy. One of Buglisi’s students, Jordan said that she chose to participate in the event because “enjoying dance as a performer or audience member is a healthy way to cope with difficult circumstances.”

The dancers raised their hands for one minute of silence at 8:46 a.m., the exact time the American Airlines Flight 11 crashed into the North Tower in 2001. At that exact moment, the sun moved behind the clouds and a shadow fell on the plaza. “The shadow made the weight of what we were doing that much more compelling,” Jordan said.

Other students took to a Campus Ministry Mass to honor the victims of the attacks. This year, Sept. 11 fell on one of Campus Ministry’s regularly scheduled Wednesday night “coffee table Masses.” An open invitation was offered to students who wanted a place to reflect on the events spiritually.

“It can’t ever hurt to reflect,” said David Fresolone, FCLC ’22, who read the hymn during the Mass. “I think we all grow from thoughtful reflection, and I’m sure that some people found this very healing. And if at least one did, then it was helpful.”

Bridget Fong, Gabelli School of Business ’21, chose to visit ground zero with friends as her own way of honoring 9/11. Her father and uncle were both policemen and first responders in 2001, and her uncle passed away in his efforts. “It only felt right to visit my uncle’s name engraved on the memorial and honor all the other people who unjustly lost their lives that day,” Fong said.

“There was an overwhelming sense of respect,” Fong said, describing all the flowers and American flags that decorated the memorial. She said that visiting at night, with the light beams from the tower illuminating the reflection pools, created a peaceful setting for reflection.

“Although it has been 18 years since the tragic events of 9/11 occurred, I think it is important for us to continue to honor those who passed away, as well as recognizing that amount of growth that has taken place,” Fong said.