The Hidden Benefits of Being a Freshman in McMahon Hall 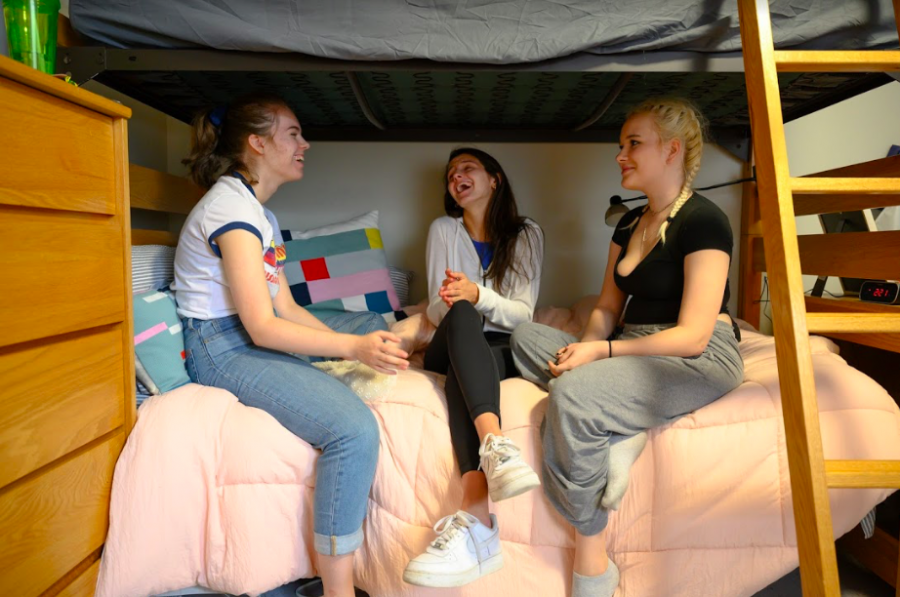 While many freshmen are disappointed with forced triples, forced tripling can lead to growth, fun and adventure.

You are a senior in high school, struggling under the crushing weight of college applications. Life seems drab and miserable until one day you hear the good news: you were accepted into Fordham’s Lincoln Center campus.

Flash forward months later, and you are attending an Accepted Students Day. Crowds of hopeful freshmen walk slowly down the halls, taking in every aspect of the school and anxiously conversing with faculty and current students.

Finally, you reach the best part of the day: the dorm tour.

You almost can’t believe your eyes. The McKeon dorms are gorgeous shrines to the beauty of the NYC skyline. They give you a glimpse into the city life of which you always dreamt.

Then, during the summer comes the bad news: You were placed in McMahon Hall as a freshman.

Also, you have eight roommates.

While this discovery was overwhelming at first, take heart: Being placed in a forced triple as a freshman has been single-handedly the best possible aspect of my experience at Fordham so far.

My roommates and I instantly acclimated to the unique challenges of living together. As McMahon residents, we were not required to have a meal plan, which meant that we ventured on shopping trips together and held roommate dinners almost every night. In our small, domestic apartment, we became friends and companions — an invaluable asset the first few weeks of freshman year.

While we certainly have missed the benefits of McKeon (of which there are many), we have grown to view our space as a home, and each other as a quasi-family. Just like that, our freshman fears of loneliness and isolation vanished. No matter what we were doing or where we were going, we had each other to lean on and sympathize with.

Additionally, the sheer size of our apartment allowed us all to mingle with each other and become friends when we normally wouldn’t have crossed paths. With seven distinctly different majors, the shared apartment space allowed us to build a diverse and inclusive community. We are able to both celebrate new cultures and introduce each other to our own traditions. Whether we venture into Flushing to eat at a hot pot restaurant or set up pallets of blankets to watch our favorite movies, we introduce ourselves to each other by sharing what we love.

Being a freshman in McKeon is a classic Fordham experience, but that doesn’t necessarily mean it is the best one. The smaller dorms and varying cultures of every floor at McKeon can lead to an air of exclusion and isolation, especially if one doesn’t get along with their roommate(s).

At McMahon, this sense of separation is nonexistent because students live close to one another and share the same gyms, laundry rooms and lounges. Although McMahon has its downfalls, it undoubtedly fosters a stronger sense of community and friendship, attributes that incoming freshmen can’t help but appreciate.

While gaining access to McKeon can only be classified as a huge hassle, this inconvenience is often circumvented by meeting in shared social spaces, such as the Ram Cafe or the student lounges. Friends from classes will often sign you in, and brand new stickers from ResLife also give you access to McKeon’s social events and lounges. Late night shenanigans at McKeon might be off-limits to McMahon freshmen, but there are plenty of entertaining student experiences in McMahon as well. Just a glance at some of the signs pasted on the windows will prove that.

McMahon may seem like the ugly stepsister in comparison to McKeon’s fair maiden, but the truth is much more complex than that. McMahon, despite its lackluster reputation, provides freshmen with a domestic experience that gives them not just a dorm, but a home.

Even though I have only lived in McMahon for a few weeks, I can’t wait for what the future has to hold. With Thanksgiving and Christmas parties already planned and birthdays coming up soon, I have no doubt that my roommates and I will foster an even closer community in the months to come.

I cringed when I saw my freshman year roommate assignment, already picturing the chaos of living and interacting with so many people. Looking back at it now, only three weeks into my stay at Fordham, I wouldn’t change a thing.