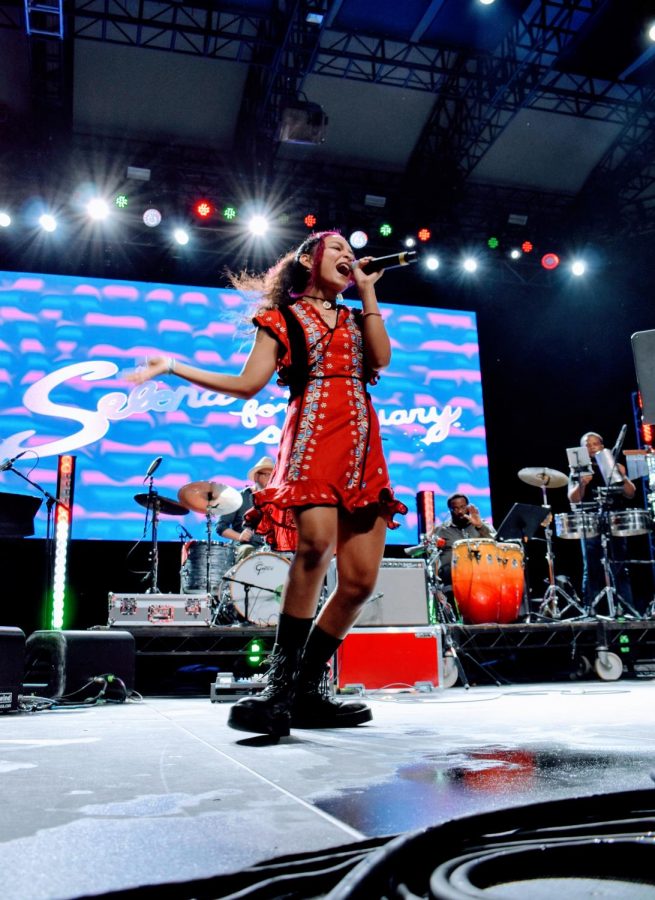 The free Selena-themed concert raised awareness for immigration rights and promoted hope for immigrants and the Latino community.

It was a bright and sunny Sunday until scattered thunderstorms hit Central Park the afternoon of Aug. 18. About 2,000 people stood in the pouring rain outside SummerStage waiting to get into the much-anticipated Selena for Sanctuary concert organized by artist manager and activist Doris Muñoz.

Breakthrough Latin artists such as Kali Uchis, Cuco and Helado Negro gathered together with Muñoz to put on this free outdoor concert to celebrate legendary Latina artist Selena Quintanilla-Pérez and bring awareness to immigrant rights. People in line from all walks of life and all different ages were drenched from head to toe, but nothing could stop them from persevering through the storm.

The third annual Selena for Sanctuary concert was geared towards bringing to light immigrant rights group Make the Road NY; LA-based fashion brand Kids of Immigrants; and Muñoz’s own non-profit, Solidarity for Sanctuary (which became official that day). Make the Road NY is an organization that mobilizes policy innovation and provides legal services to those seeking safety and the needed support to combat discrimination, abuse and poverty. Kids of Immigrants is a unifying clothing brand that teaches people that we may all be cut from different fabrics (race, gender, citizenship status), but together can make a whole.

The Solidarity for Sanctuary concert series began as an attempt by Muñoz to raise funds to cover the legal fees necessary to help her undocumented parents and siblings attain citizenship. The nonprofit has since blossomed to help immigrant rights organizations and others obtain citizenship.

When the doors opened at 6:30 p.m., a flood of eager fans poured onto the wet, grassy turf and bolted toward the stage to watch their favorite Latino artists. Overall, about 5,000 people showed up for the packed event, and there were still many more waiting outside the gates to get in when it started.

The Santuario House band, led by Adrian Quesada, kicked off the show with Helado Negro. Supporting artists Ambar Lucid (who danced with her little sister, Mia, on stage), IV Jay (who delivered a heartwarming performance of “Dreaming of You”), La Doña and Jaspar Bones also hit the stage, singing some of their own songs as well as popular Selena songs. Broadway star Ana Villafañe joined in on the celebration, bringing her killer dance moves to the stage and pumping up the crowd.

The crowd went wild when Cuco sang “Bidi Bidi Bom Bom” and was joined by Chris Pérez, lead guitarist and husband of the late Selena. Onwards, the night was filled with dancing and singing along to some of Selena’s most popular songs, such as “Amor Prohibido.” Co-founder of Kids of Immigrants, Daniel Buezo; the Make the Road NY team; and Muñoz came out to stress the importance of family and express the importance of coming together to support undocumented immigrants. “¡Si Se Puede!” chanted the crowd all throughout the night after empowering speeches fueled by hope for a brighter future.

Finishing out the show was critically acclaimed Latina artist Kali Uchis, who wore a stylish statement ensemble that had the phrase “No human being is illegal” written all over. Uchis sang her hit song, “After the Storm,” a collaboration with Tyler, the Creator, and the Selena song “Como La Flor.” For the final song, Uchis sang “Baila Esta Cumbia” and invited all the artists to come back onto the stage and dance.

The Selena for Sanctuary concert was not only an unforgettable experience, but it also felt like the beginning of an artistic revolution charged with the strength of the Latino community. For Muñoz, music has allowed her to foster activism and show society the harsh realities of deportation. Every day, families going through the process to obtain citizenship are torn apart.

The concert served as a safe terrain for those affected by immigration law and a community space for those in need of support. Muñoz has tirelessly devoted herself to social justice and is one to watch as she leads Solidarity for Sanctuary into its next chapter.