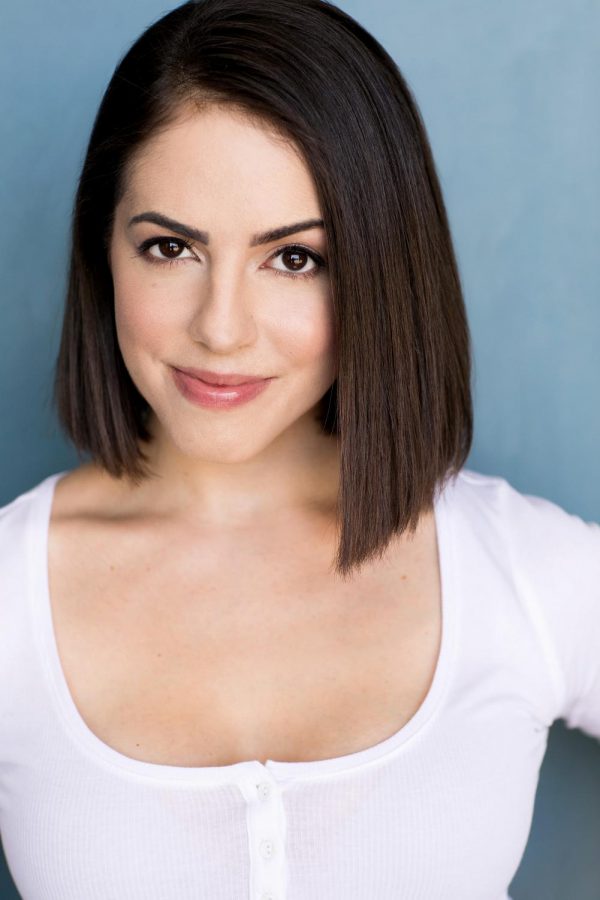 Kathryn Feeney has roles in "Mr. Iglesias" and "Where'd You Go, Bernadette?"

Comedy actress and writer Kathryn Feeney, FCLC ’10, has great cause for celebration. Feeney plays Katie the bartender in the new Netflix sitcom “Mr. Iglesias,” which premiered in June and was recently renewed for a second season.

The show stars comedian Gabriel “Fluffy” Iglesias and follows a high school history teacher with a mission to uplift gifted but disadvantaged students. According to Feeney, a similar good-natured spirit exists off-camera, too.

“Kevin Hench, who created [the show], and Gabriel Iglesias have a motto that’s in the show, actually: ‘Work hard and be nice,’” Feeney recalled. “Every time I was there, they made me feel so at home, so welcome. Everyone was really lovely.”

One of Feeney’s best friends, fellow actor Maggie Geha, was cast as the show’s perky history teacher, Abby Spencer. Shortly afterward, Feeney ran into the “Mr. Iglesias” creator at a studio lot where she was working on another project. They began to discuss Geha’s casting and things “just started falling into place” for Feeney from there. She sent along her reel and soon landed the part.

“It was one of those things where, they say in this business, ‘Luck is when opportunity meets preparation,’” said Feeney. “That’s very much how this felt. It wasn’t the conventional way of getting a role … but if I hadn’t been working for all these years and I hadn’t put together a strong comedy reel, even with that crazy encounter, I probably wouldn’t have gotten it.”

She can also be seen in the movie adaptation of “Where’d You Go, Bernadette?,” which was just released in theaters on Aug. 16. Feeney is only in one scene as a pharmacy employee, but that scene gave her an “exhilarating” opportunity to work closely with the movie’s star, Cate Blanchett.

“It took 13 hours to do that one scene,” said Feeney. “I was terrified, but only because I was letting myself be that way. She was perfectly lovely, and it was really cool to watch her work … I’ve never worked with anyone at that level before.”

Feeney’s own Los Angeles career began shortly after her graduation from Fordham. She has now lived and worked there for seven years, but the New York native “100,000%” wants to move back in the near future.

“It’s a lot more sprawling here; it’s hard to connect with people,” Feeney said of LA. “I’m considering [moving back to N.Y.] as we speak. I’m engaged, and my fiancé is from Pittsburgh. He’s an actor, too, and we’ve both always, always known we’re going to head back east at some point.”

Prior to establishing herself on the West Coast, Feeney was a child actor in New York from age 10, appearing in a national tour of “Ragtime” among other productions. She was not a theatre major at Fordham, however; her early exposure to professional theatre caused her to become disillusioned at a young age.

“By the time I was 12 I felt unemployed. All these awful things that make life difficult when you pursue a career in the arts as an adult, I was already experiencing that as a child,” she said.

This feeling drove her to explore other paths in college — she studied political science and communications with a journalism concentration, putting much of her time into The Observer. The unexpected loss of one of her colleagues in a car accident made her reconsider her passion.

“Casey [Feldman] was the news editor when I was the assistant news editor,” Feeney said. “When Casey passed away, a lot of us went through a lot of emotions. That’s kind of what spurred me on to decide to go back to acting and pursue my career in show business because I was like, ‘Well, I might as well pursue my dreams while I’m still here.’”

That’s not to say she’s given up on her other interests entirely. Feeney put her plans to attend law school on hold for her acting career, but recently started attending law school part-time while working on acting projects.

“It’s something I’ve always been interested in,” she said. “I don’t know what I want to do with it. I don’t have any plans to become a full-time lawyer … but I figured, this opportunity presented itself, and I’m taking it day by day and seeing where it leads me.”

Perhaps she’ll find herself studying for another exam in her dressing room during season two of “Mr. Iglesias.” Whatever project she takes on, on whichever coast, she’ll surely keep busy.