Sleepwalkers Anything But Sleepy with Electrifying Show at Rough Trade 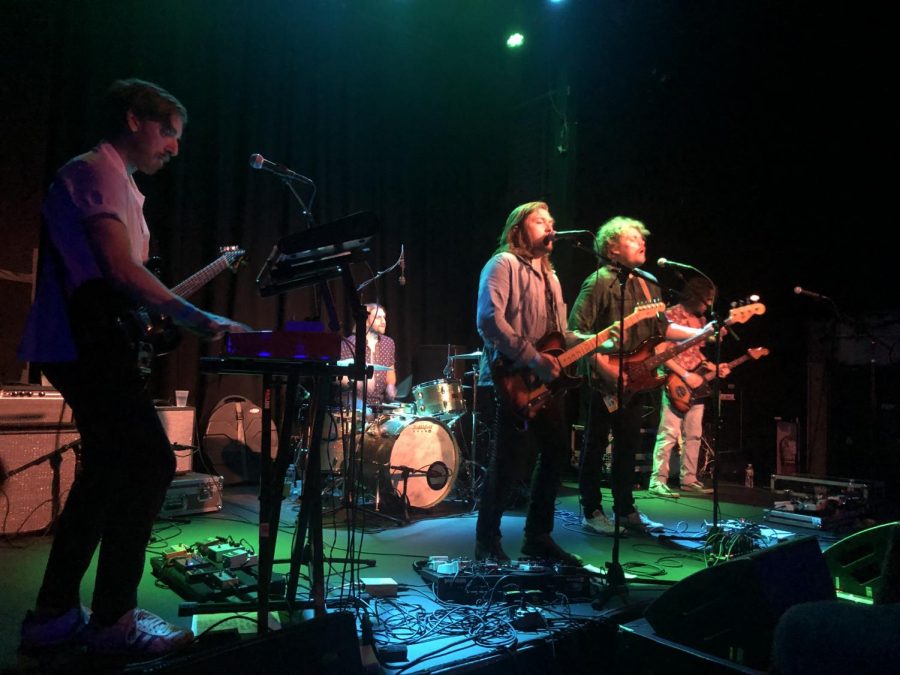 Despite the fact that Richmond is the fourth-largest city in Virginia, it still has a population that is smaller than the Upper East Side. But that’s not stopping Sleepwalkers, natives to that southern town, who are on a mission to redefine pop music altogether.

“We’re just trying to give pop a good name again,” Austin York told me. We talked in a semi-outdoor sitting area behind Café Beit in Williamsburg, Brooklyn. The furniture was as old as time, but all five members of Sleepwalkers were clear foils for the atmosphere. All they want to do is push the envelope and create a new sound in a genre that has been oversaturated for as long as it has existed.

“It’s nice to have that ear candy and that duality where the lyrics are opposing the sugary pop melodies,” he said. “It gets people to sit down and listen to the lyrics and really get into it.”

Sleepwalkers is all about positivity, the quintet explained — the group also includes drummer Alex De Jong, guitarist and pianist Mike Bryant, and guitarist Jacob Shank. The purpose of putting on one of their albums is to brighten the listener’s day and bring some optimism to their life. The epitome of this message comes in the form of the group’s newest album, “Ages.” The title track is split into three parts: an intro, the main song and an outro. There’s a reason for this, and it’s true to the band’s purpose.

“The first part of it is someone that’s depressed, sad, at the end of their rope.” Michael demonstrated with his hands. “And then the song actually is a person singing about being in that space. The chorus comes in and it’s the older self talking to them, going, ‘It’s gonna be alright … it’s gonna be fine. And the third part is, ‘I found the thing I’m looking for.’”

Even the “downers” and serious songs, like title track “Ages,” have an optimistic message to take away from them, Austin said. All five members agreed.

For a band with a name that conjures up thoughts of dreaming and sleepiness, these bold opinions are fairly unexpected ones to have. Pushing the envelope of pop music itself is something that few artists dare to do — all too many are content with the status quo of major-label superstars and industry plants — but Sleepwalkers simply is not the same way.

This group wears its influences on its sleeve like so many others, but what makes Sleepwalkers stand out is the vast and diverse pool of talent from which they pull their inspirations. On their own Facebook, they mention Peter Gabriel, The Kinks and Mac DeMarco; in other interviews, they’ve noted Prince, Hippo Campus and The Cars. In my own listening, I noticed The 1975, The Beatles, and King Gizzard and the Lizard Wizard inspiration clearly present in the music (a few of them lit up when I mentioned King Gizzard in conversation). They mentioned Broncho, Motown and Stax, and Tame Impala themselves at Café Beit.

“We have so many different genres and styles,” Austin said, “and it just kind of blends into a melting pot.”

Michael added that “all the styles blend together, and it’s the production that blends things together rather than the actual styles of the songs.”

Whatever it is that holds the music together, it made for an absurdly energetic show. When they took the stage at Rough Trade in Williamsburg, Brooklyn, it was the hottest day of the year — the heat index was 111 degrees — but the room was still packed with people.

It was impossible to stand still. Either the music or the other people dancing were infectious, or both, but every single body in the room was off its feet. Even the photographer and the label rep seemed to want to be there, even if they didn’t have to for business. The best moment was when a guy who was clearly there by himself began to jump back and forth and encourage those around him to join him. It was a blissful moment that demonstrated the power of live music.

The band took very few breaks to speak to the crowd, which was a good artistic decision — it would have mellowed the vibrancy of the gig. They did not slow down all night. They continued fostering the positive energy they spoke about earlier that day.

You can expect them back “very soon,” according to De Jong. “I’d say in the next couple of months, we’ll be back. New York is one of our favorite spots to play. We try to get here at least three times a year, four times a year.”

Their love for New York is deep and genuine. Michael loves the bars in the East Village. Bryant has a “soft spot” for the Lower East Side. And as for Shank, he wants to return for “that pizza spot by the Music Hall of Williamsburg.”