Transformation: The Class of 2019 Departs Fordham 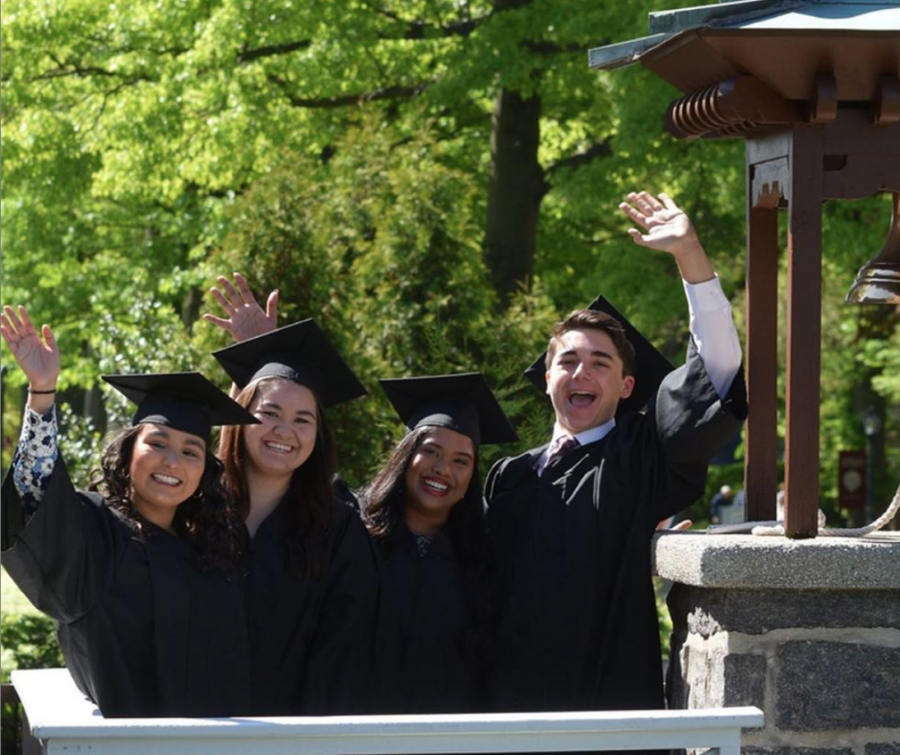 It was the first warm day after an odd May cold front. After a stretch of days begging for coats and sweaters, the notoriously fickle New York weather had decided that, for no particular reason, Fordham’s graduation was to be a ceremony marked with sweat, sunburns and sunshine that would thankfully be partially-blocked by one’s square cap.

On Saturday, May 18, the whole of Fordham’s Class of 2019 sat in front of the steps of Keating Hall, impatiently shifting in the scalding heat of several layers of clothing. Even still, the air still buzzed with the electric pulses of excitement.

In barely contained whispers, proud parents bragged to one another. Anxious administrators cracked jokes to ease the stress of running the event. And of course, the students of the day stared down their futures with a mix of fear, anticipation and wonder.

The day began with Commencement, as Chairman of the Special Olympics, Timothy Shriver, PhD., delivered an energetic speech to roaring laughter and emphatic applause from students, faculty and parents alike.

“I am not here to preach. I think there are enough preachers in this place already,” said Shriver, drawing a chuckle from the crowd.

Yet that did not prevent Shriver from sharing his belief that all too often we are encouraged to shut out people as “other.”

“You have a choice,” he told the crowd. “You have to decide which side you’re on. I hope you will choose to be a transformer and to be brave.”

Shriver’s speech was not just marked with a powerful call to action, but a number of memorable displays. In full graduation robes, he danced on stage with University President, Rev. Joseph McShane, S.J., to Sara Bareilles’ song “Brave.”

Shriver also engaged the crowd in an exercise that many recent alums remember as incredibly moving.

“Let’s imagine this day is actually a track meet,” he said.” You’re here for the local Bronx Special Olympics local games. Right down on here is the track, and assembled here before you are six or eight athletes.”

“I want you to imagine catching the eye of one of the athletes. Maybe just for a moment let that athlete catch your heart. Maybe you could just imagine their little eyes looking up at yours and somehow know that those little eyes have seen their spirit wounded over and over and over again by a world that saw them as other.”

And the crowd did exactly that.

The Rev. Robert Grimes, S.J., the former Dean of Fordham College Lincoln Center, spoke highly of the ceremony. Although he was unable to attend Commencement in person, he was thrilled to have watched the distribution of the diplomas from the steps of Keating Hall.

“I feel like we do graduation particularly well,” he said. “This year was actually the first year that I was at a graduation in [the last few] years.”

Grimes stepped down from his position in Fall 2018 because of medical complications. As Dean, he held a variety of traditions and events to get to know the students he presided over, but the Class of 2020 marks the first class that Grimes has not been able to fully oversee. “This is sort of the last class that I know,” he admitted.

“After 20 years of knowing classes, it was kind of a little sad, because I really loved getting to know students as they went through Fordham College Lincoln Center,” he said. “From reading their applications until graduating — and then inviting them to join me on LinkedIn, so I could follow them on what they did afterwards!” he chuckled.

In many ways, the ceremony marked a transformation for Fordham, particularly its Lincoln Center campus. Not only does this graduation bookmark the final class of Grime’s tenure, but it also opens the door for Fordham College Lincoln Center’s new dean, Laura Aruccio, to begin connecting with the Class of 2020 and beyond.

Shriver asked the class of 2019 to become “transformers” upon graduating. It appears their departure has already begun to transform our campus.