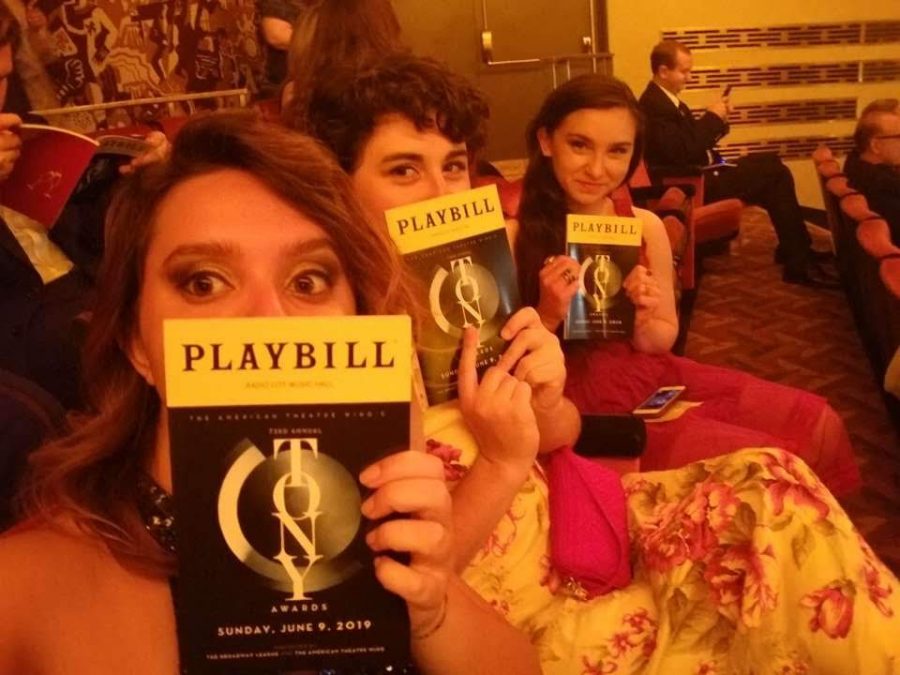 Fordham students who attended this year's Tony Awards shared the space with many famous nominees, among them Fordham alumni and faculty.

The Rams were well-represented at Radio City Music Hall for the 73rd annual Tony Awards.

The June 9 ceremony celebrated the best of the Broadway season. Fordham alumni and faculty were involved in the nominated shows as actors, designers, producers and stage managers. While no Fordham nominees personally took home a trophy, their work was honored through their very nominations, along with the awards their shows received on the whole.

“Hadestown” was the night’s biggest winner, sweeping up awards in eight categories including Best Musical. Jessie Bonaventure, Fordham College at Lincoln Center (FCLC) ’15, was involved in the show as assistant scenic director. She held the same job as part of Heidi Schreck’s “What the Constitution Means to Me” (a Best Play nominee), and Siena Zoë Allen, FCLC ’15, was the associate costume designer.

Previous Tony winner Julie White, Professional and Continuing Studies ’09, was nominated for Best Featured Actress in a Play for her role as Carol in “Gary: A Sequel to Titus Andronicus” (alongside her co-star, Kristine Nielsen). This was her second time being nominated in this category — the first occurred in 2015 for her role in “Airline Highway.” Although she was the critics’ favorite to win this year, Celia Keenan-Bolger took home the prize instead for portraying Scout Finch in “To Kill a Mockingbird.”

Ephraim Sykes, FCLC ’10, became well-known on the Broadway scene for his roles in musicals, including “Newsies” and “Hamilton.” This year, he received a Best Featured Actor in a Musical nomination for playing David Ruffin in “Ain’t Too Proud: The Life and Times of the Temptations,” a Best Musical nominee. Sykes lost to André De Shields of “Hadestown,” but delighted the audience during a rollicking performance from “Ain’t Too Proud” that included a medley of classic Temptations hits.

Other Rams involved in this season’s musicals included “Be More Chill” assistant stage manager Kaleigh Bernier, FCLC ’16, and Drew King, FCLC ’09. King is an ensemble member of the Best Musical-nominated “Tootsie,” for which Robert Horn won Best Book of a Musical and Santino Fontana, as out-of-work actor Michael Dorsey and his female alter ego Dorothy Michaels, won Best Leading Actor in a Musical.

“The Prom,” another nominee for Best Musical, features former Denzel Washington Endowed Chair in Theatre Michael Potts as righteous school principal Mr. Hawkins.  Wayne “Juice” Mackins, FCLC ’19, led a lively dance sequence in the play’s Tony performance as part of the ensemble. His role also earned him a place on the Ensemblist’s “Ones To Watch” list at the end of of 2018.

Two nominated plays this season — “Gary” (Best Play) and “The Waverly Gallery” (Best Revival of a Play) — had John Johnson, FCLC ’02, as executive producer. “Waverly Gallery” star Elaine May was awarded Best Leading Actress in a Play for her portrayal of a woman deteriorating from Alzheimer’s. “Gary” was nominated for Best Costume Design, Scenic Design and Direction in addition to Best Play and White and Nielsen’s nods. Clint Ramos, a faculty member in Fordham’s theatre department, was also nominated for Best Costume Design of a Play for his work on “Torch Song.”

While the ceremony took place onstage, journalists like Morgan Steward, FCLC ’19, monitored the ceremony and performed interviews with the night’s victors. Steward interviewed attendees on the red carpet prior to the awards and contributed to a live blog for Broadway News as the ceremony progressed.

“On a personal level, I was trying to make sure I was reporting the event on Twitter, sharing the good bits that were not going to make it into the live blog or final wrap up piece, which we were also writing at the same time,” she said.

The ceremony was not exclusive to alumni and famous nominees. Student rush tickets were made available the Thursday before the event, and multiple current Fordham students took advantage of the offer to be part of the star-studded event.

“I felt honored and elated to be in the presence of talented people who use theatre to make a permanent impression on fleeting audiences and address complicated social issues with love and acceptance,” said Vivian Crea, Fordham College at Rose Hill (FCRH) ’20.

“To me, attending the Tonys meant living the dream,” said Marina Setaro, FCRH ’21. “I remember watching the awards being presented on TV with wide eyes, and I never thought I would actually make it into the room where it happens.”

As part of the live audience, they got a glimpse behind the scenes of the televised broadcast and into what goes on when the cameras aren’t rolling. This year, commercial-break activities included showtune trivia and karaoke organized by host James Corden. Ben Platt (“Dear Evan Hansen”), Anthony Ramos (“Hamilton”) and Billy Porter (“Kinky Boots,” “Pose”) led renditions of hit showtunes exclusively for the live audience, encouraging all its members — fellow stars and students alike — to sing along.

“The best part of the Tonys wasn’t being amongst the celebrities,” said Setaro. “It was feeling like one.”