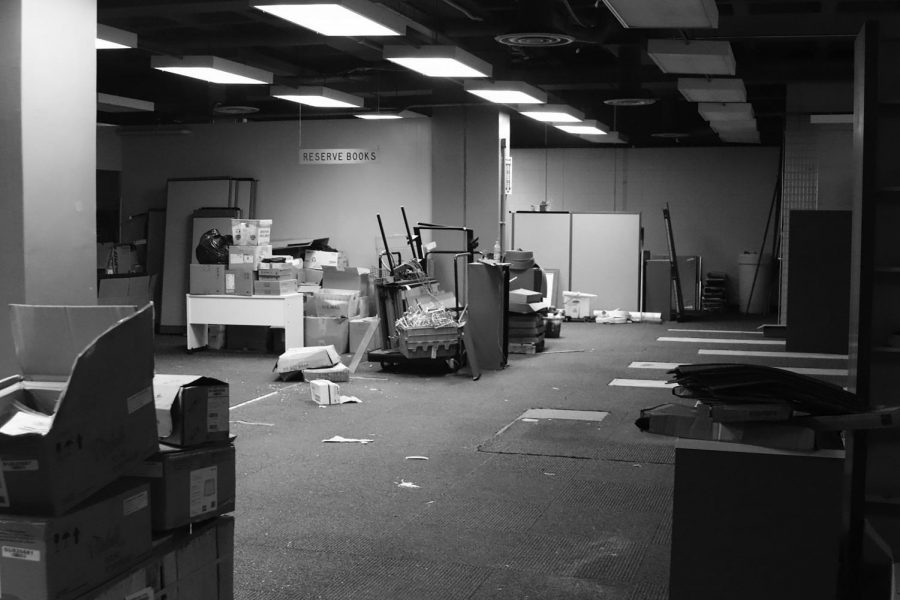 Since 2016, Old Quinn has stood empty, prompting questions about use of space at Lincoln Center.

In May, the graduation of Fordham’s class of 2019 will mark the end of the Old Quinn era. Everyone graduating from 2020 onward was not a Fordham student when Old Quinn was still open. However, they will get a taste of the new use of the space when Quinn X reopens before the end of this semester.

Quinn X, which is short for “Quinn Annex,” refers to the western section of the former Quinn Library space containing all books written before the year 2000. Currently, the space is occupied by book stacks that house some 300,000 volumes of books, as well as additional seating and audiovisual storage, but starting May 6, it will reopen as a library extension and study space.

Old Quinn is a physically separated section from Quinn X, but the two originally functioned in tandem before the library moved to its current home in the building at 140 W. 62nd St. in 2016. According to Director of University Libraries Linda LoSchiavo, Old Quinn is currently being used as a “staging area” while areas of the Lowenstein building undergo renovations.

Academic departments have vied for permanent ownership of the space ever since the relocation to the 140 W. Building. However, they will only be able to use it temporarily and only as a necessity, according to Vice President of Fordham Lincoln Center Frank Simio.

Old Quinn “will eventually be used as swing space as sections of Lowenstein are renovated,” Simio said. In the past year, both the sixth floor and the second floor of the Lowenstein building have undergone renovations, and Simio hinted that there are more to come.

Beyond the revolving door of occupation by academic departments, there are no permanent plans for Old Quinn, LoSchiavo said.

LoSchiavo claimed the QuinnX space will serve as a library extension, including a study area and a functioning book checkout service when it reopens May 6.

There has been both ongoing debate and confusion about the future of Quinn X and Old Quinn. At several recent College Council meetings, attendees have proposed several uses for the spaces.

One proposal for Old Quinn discussed at a Feb. 28 College Council meeting was to convert the 24’-by-24’ area in the back into an academic help center. LoSchiavo said that she is unaware of any further developments to that plan.

At another meeting on April 4, administrators shot down the idea of a “learning commons” in Old Quinn. Instead, they opted to pursue a space in Rose Hill’s Walsh Library for a similar initiative.

But the debate about what to do with Old Quinn dates back even further. Various Fordham departments have released email surveys to the student body that ask recipients’ opinions on certain potential uses for an empty space on campus.

One survey, which the Fordham University Bookstore sent in February 2018, asked students if they wanted a bookstore, performance space, coffee shop or “something else, if they had the option to choose” to occupy an open space. Another survey, which Fordham IT released in April 2019, asked about opinions regarding a potential virtual reality room or an IT help office.

LoSchiavo said that all of these options are still possibilities, but there is still no permanent plan for Old Quinn. In addition, Elizabeth Cornell, director of IT communications, said Fordham IT has no current plans for Old Quinn.

Students have weighed in on some of these options, generally opposing those that benefit faculty more than themselves. Tigerlily Cooley, Gabelli School of Business (GSB) ’20, for example, said that an IT office or other academic offices would be “boring,” though she understands the practical reasons for needing them. She would prefer that the school use Old Quinn as a performance and rehearsal space for musicians instead.

“They should be doing more to create spaces for the artistic students that aren’t just drama students,” Cooley said. She also criticized the current music practice rooms, saying that there are too few and that they are too small to be used properly, especially by bands and groups.

Amanda Scacalossi, GSB ’20, said she would like the space to be turned into a senior-exclusive lounge for studying or food. “That’d be a nice privilege,” she said.

Like Cooley, Scacalossi finds the idea of occupying Old Quinn with office space unappealing. Neither student welcomed the idea of a virtual reality room.

The last update regarding Old Quinn came from the Lincoln Center Space Planning Committee, chaired by Simio, in November 2018. The only change between then and now is that Quinn X is reopening; the rest of Old Quinn, meanwhile, will continue to languish for the foreseeable future.