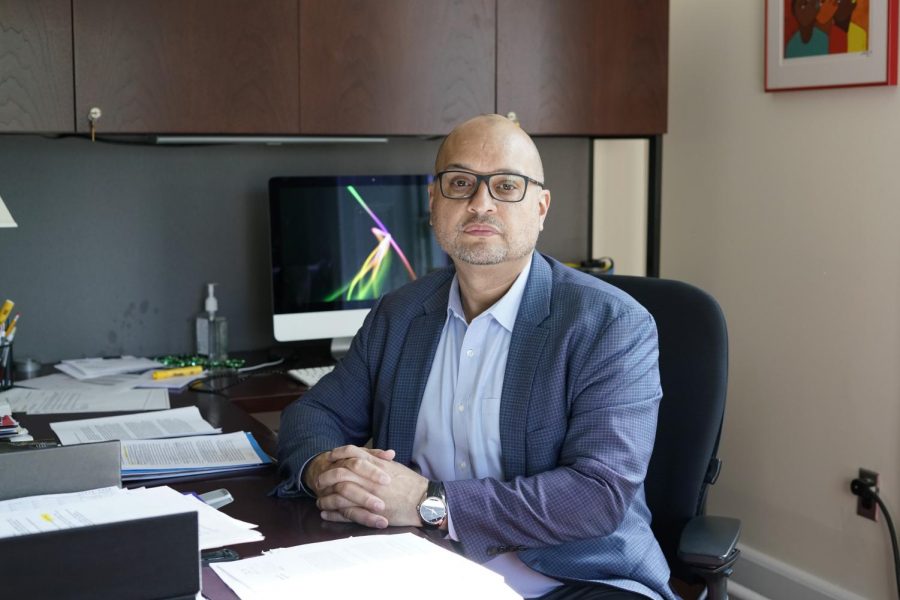 Rafael Zapata, chief diversity officer of Fordham University, has used this year to begin the planning process for policy overhauls. These initiatives aim to decrease discrimination and exclusion on campus.

Recent developments from Fordham’s administration indicate that the many conversations surrounding identity and inclusion on Fordham’s campuses have finally come to a head this year.

Fordham University’s tenet of “cura personalis” — care for the whole person — guides the university’s policies to play a role in more than just the academic education of its students. From the student body to the administration, the Fordham community seeks to build an environment that includes diverse perspectives and supports individuals of every background.

However, these values have not prevented the university community from encountering friction when it comes to social change. Historically, conversations between Fordham’s student activists and its administration have ranged from the cordial to the contentious. In recent years, some student efforts, such as the push for transgender-inclusive housing, have faced near-complete silence from administration. Others, like Students for Justice in Palestine and the Students for Sex and Gender Equity and Safety (SAGES) Coalition, have even been banned entirely.

Rafael Zapata, chief diversity officer of Fordham University, understands that Fordham has had a long and difficult history when it comes to working with its student activists, especially in its understanding of emerging diverse perspectives.

“Fordham is not unique in that regard, in its challenges around diversity,” Zapata said. “It’s always been a challenge here and in our greater culture and community.”

Zapata, who joined the Fordham community in 2018, has worked closely with the 22-person Diversity, Equity and Inclusion (DEI) Council this year to assess the circumstances Fordham faces and the changes it needs most.

“Our focus is the structures and policies,” said Zapata, who is a co-chair of the council. The council’s membership consists of faculty, students and administration alike. “It’s boring stuff, but systems provide results. So how do we create the systems to create the results that we seek?”

The DEI Council has held two meetings this year, with a third slated before the end of the semester. Currently, it is working with the management consulting firm Cambridge Hill Partners to target specific policies and initiatives at Fordham that need changes in the coming years.

At the advice of Cambridge Hill, Zapata and the DEI Council are currently in the process of researching the student outcomes and achievement statistics in all Fordham’s programs. “This initial phase of building takes time,” Zapata said. “We want to have data for each school to understand their needs.”

Zapata claimed that concerns from students and faculty were one of the primary reasons for this research. He also noted that academic publications — including those published by Fordham faculty — about race, structural achievement gaps and social mobility have heavily informed the council’s target research areas. “It’s our responsibility to learn from everything and push ourselves to do better. That’s our charge,” he said.

Fordham is one of 17 universities to work with Cambridge Hill Partners — including many schools with much larger endowments, such as George Washington, Harvard, Yale, Tufts and Georgetown.

However, Zapata emphasized that Fordham’s commitment to this goal extends far beyond finance, citing Yale’s recent alleged difficulties with respecting its commitment to diversity.

“You can throw all the money you want at something,” he said. “But money is not enough, you need leadership and sustained commitment.”

University President Rev. Joseph M. McShane, S.J., created a Diversity Task Force in 2015, which released a report in late 2016 about Fordham’s issues in cultivating an inclusive environment. The report raised concerns about Fordham’s hand in historical injustices and the importance of its role in combating racism and discrimination in the 21st century. The information in the report has directly informed nearly all the policy changes Fordham has made regarding diversity in the past three years.

According to Zapata, the DEI Council meetings this year have been directly influenced by McShane’s public response to the report, which cited the national social divisiveness of 2016 as a primary cause for looking into issues of prejudice and exclusion at Fordham.

In addition to the policy changes the administration has been pursuing, the selection process for the new Dean of Fordham College at Lincoln Center (FCLC) was heavily informed by a commitment to cultivating a diverse and inclusive community at Fordham, both by way of the applicants’ personal backgrounds and their capabilities for leading the policy changes Fordham hopes to make in its future.

However, there is still a sentiment that the University does not do enough to express its commitment to inclusion among many student activists. Emma Kossoy, FCLC ’22, is an activist with a variety of Fordham student organizations. “I’m going to be on four E-Boards next year, all for diversity things,” she said.

Kossoy explained that, to most in student activist circles, Fordham’s tactic of internal deliberation before any public engagement feels like an effort to shut students out of discussions. “It’s just so quiet sometimes,” she said. “It makes us think that Fordham doesn’t necessarily want to give a spotlight to [the issues].”

She admitted that administration’s reception to student input for policy changes has “been mixed.” Some initiatives, such as the new schoolwide chosen name policy and the creation of a prayer space for Muslim students, were the direct result of collaboration between student activist groups and administrators. At the same time, other initiatives — like the push for more transparent and accessible sexual safety resources — have seemingly been dismissed, with little to no collaboration between students and administration.

“There’s kind of a radio silence,” said Kossoy. “Which implies they’re hearing us, but I mean, are they listening to students?”

Yet in most respects, this silence can be attributed to administration’s hesitance to overplay their hand. Acting Associate Dean Mary Bly spoke to the degree of miscommunication between activists and administration.

“There are these artificial barriers, I think,” she said. “The communication is not great.” However, she noted that Fordham’s administration is listening closely, despite their relative silence.

“I can tell you that [groups] like SAGES have had a remarkable effect on the faculty and administration; I just went to a workshop they ran,” she said.

Bly gave most of the credit for recent changes to student activists. “I think the students have a huge role in [activism],” she said. “You know, students really direct what’s going on around here.”

According to Bly, there are often a multitude of factors that are not easily communicated to students that can prevent changes from occurring. “Frankly, it’s complicated,” she said. “But I do think there’s been a lot of acknowledgment of what students want, a lot of celebration, a lot trying to make it happen.”

While Fordham’s administration can be held accountable for some of the barriers preventing transparency, the tone that student activism takes can also be counterproductive to creating results.

Assistant Dean for Sophomores Mica McKnight said, “Sometimes it’s important to take the time to step back and see other points of view, to see the larger picture.”

“Diversity is always a good thing,” she said. “But I think it’s something that doesn’t happen overnight; [change] is always more likely to come in the coming years.”

Both McKnight and Bly are actively involved in campus efforts to make Fordham University a more equitable and inclusive community. Both also teach courses in which the study of diversity and cultivating equal opportunity is a core component.

“I do think some things could be shared a little more [with] students,” said McKnight. “But it would require infrastructure change, like hiring personnel for a newsletter, or something like that.” McKnight gave no indication that such infrastructure changes were in the works.

However, energy remains high on all sides of the conversation. “At least for me personally, I’m gonna do my best to make as much change on this campus as I can in the three years that I have left,” said Kossoy.

According to McKnight, administration is passionate about making changes as well, but admitted that the practicalities of instituting change takes time. “Maybe we’re not telling you it was your voice that made the change, because the changes often happen for the students behind you.”

“You guys are only here for four years, after all,” said Bly.

“We want to engage the community and get their feedback,” said Zapata. “But honestly, we’re building the car as we’re driving it.”