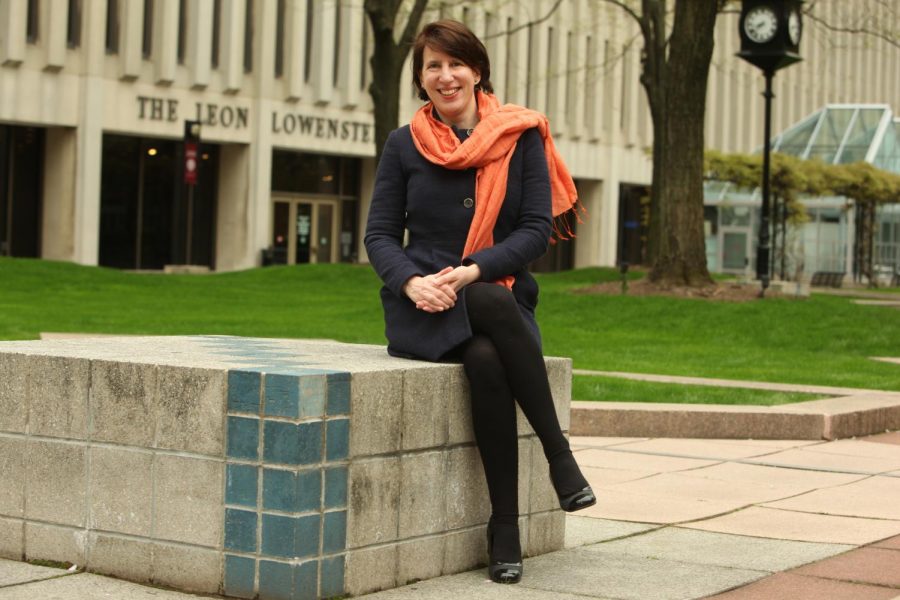 For the first time since its opening in 1968, Fordham College at Lincoln Center (FCLC) will have a female dean leading the school. On Tuesday, April 30, a search committee appointed Laura Auricchio to replace Rev. Robert R. Grimes, S.J., who served the school for a record 20 years.

By SOPHIE PARTRIDGE-HICKS and COLIN SHEELEY

For the first time since its opening in 1968, Fordham College at Lincoln Center (FCLC) will have a female dean leading the school. On Tuesday, April 30, a search committee appointed Laura Auricchio to replace Rev. Robert R. Grimes, S.J., who served the school for a record 20 years.

After a nationwide search spanning six months and a transition that lasted more than a year, University President Joseph M. McShane, S.J., and Jonathan Crystal, interim provost, announced that Auricchio would assume the role in August 2019 from Interim Dean Frederick J. Wertz.

August will not be Auricchio’s first time on a Fordham campus. When she was four, her mother was completing her Ph.D. in Psychology at the Rose Hill campus. “It was the first college campus I was ever on,” Auricchio said, recalling the times she would run around on the vast lawns, gazing up at the faces of students and professors.

As the young college grew out of 1960s radical experiment with higher education, Auricchio was there, a third-generation New Yorker, devoted Manhattanite and die-hard Yankees fan.

It was Lincoln Center’s location that drew her to the campus. “Manhattan is the best possible place in the world to be a student,” she said. Aurrichio has spent the past 17 years at the New School, first as a professor and later as vice provost for curriculum and learning, trying to show the world just that.

“As an urban campus, it’s a challenge to develop community, but I think it’s so important,” she said. At The New School, Aurrichio assisted in implementing a bell schedule that facilitated easy movement among the school’s five campuses, a choice she hopes will foster that urban community.

Another challenge Auricchio will face is FCLC’s relationship to the rest of the university. Grimes, whose time as dean was punctuated by his effort to make the college distinct from its Rose Hill counterpart, worried that the transition will make the two “homogenized.”

But “the idea of Lincoln Center as a satellite campus,” Wertz said, has long passed. “The college as a colony,” an imaged that has hung over Lincoln Center for decades is no longer a concern for many members of the community, he said.

Auricchio is determined to toe the line between bridging a connection between the colleges and maintaining Lincoln Center’s distinct identity, though it might take some creative thinking, she said.

While she’s never been great with a paintbrush or a canvas, Auricchio is a textbook academic. With a Bachelor of Arts in Psychology from Harvard University, a Ph.D. in Art History and Archaeology from Columbia University and a Twitter feed packed with references to 18th century history, Auricchio said, “I have a great intellectual curiosity.”

A specialist of French and American history and an accomplished writer, Auricchio has written two historical works. Her biography “The Marquis: Lafayette Reconsidered” won the 2015 American Library in Paris Book Award.

Transitioning from teaching to administration was not necessarily a decision she sought out, but one that found her, Auricchio said. “I love students,” she said, but “you can shape a lot more, and help a lot more people in a leadership position.”

As a vice provost, Auricchio said that her email box was often spammed with open positions at universities across the country — but it was only Fordham’s that caught her eye.

“Now that I know more about the Jesuit pedagogy,” she added, “this is actually what I’ve always been striving for but didn’t actually know the words.”

Between Rose Hill and her Italian, Irish and French Canadian family, Auricchio said she grew up in a household steeped in Catholic social justice. She has an aunt in the Sisters of St. Joseph’s and a cousin in the Sisters of Mercy.

Crystal said he was impressed with Auricchio’s commitment to Fordham’s mission, citing “her passion for promoting diversity and inclusion, and her ideas for enhancing the academic quality of the college and the student experience.”

The hiring process was marked with an emphasis on finding a diverse range of candidates with different backgrounds. But Auricchio says that she didn’t think of her gender in relation to her appointment. To her, diversity is only one part of a three step equation. “Bringing people in is not enough,” she said. Equity and inclusion are just as vital in the process.

Assistant Dean for Freshmen Joseph Desciak said he was impressed with Auricchio’s interest in Lincoln Center’s future. “I think the new dean has an incredible opportunity for FCLC specifically because we really are on the cusp of incredible greatness,” he said. “I think she seems appropriately aware of ways in which she needs to engage not just the Lincoln Center community, but the New York City community as well.”

Keith Eldredge, dean of students at FCLC, said he welcomes the transition, although it might feel strange at first. “Father Grimes was here for so long, and the history and experience that he brought,” he said, “in some ways this feels like a whole new world, I think that’s both scary and exciting.”

Grimes, whose legacy of shaping FCLC into the school students know today, was optimistic about things to come. “Her credentials are impressive so I am sure she will bring new ideas and energy to the college, leaning it forward into the future,” he said.

Auricchio said she was sad to be leaving The New School. But in joining the Fordham community, she said, “I am finding an intellectual home.”

Correction: A previous version of this article indicated that Interim Dean Frederick Wertz believed distinguishing Lincoln Center from Rose Hill would be a challenge for incoming Dean Laura Auricchio. He does not believe that it is a pressing issue.