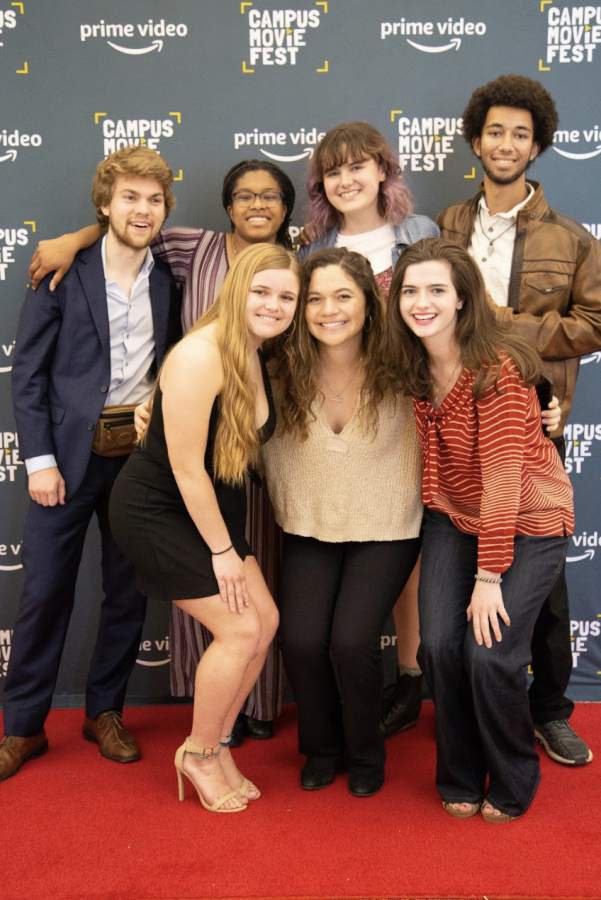 Rose Hill’s McGinley Ballroom was packed full of students on April 24. Student filmmakers, actors and friends gathered to walk the red carpet and view their peers’ work at this year’s Campus Movie Fest (CMF), organized in conjunction with the Campus Activities Board as part of its Spring Weekend programming.

Since its inception more than 15 years ago, CMF has become the largest student film festival in the world. Students from universities all across the United States are given filmmaking equipment and one week to shoot and edit a five-minute movie.

An anonymous panel of students, faculty and staff judges the submissions on technical proficiency, content and overall quality, and the best films are shown at CMF. Between the two campuses, 60 films were submitted this year. 16 were chosen for screening at the event.

One of these films was “Elijah,” written and directed by Cole Wagner and Dan Tuozzoli, Fordham College at Rose Hill (FCRH) ’19. Tommy Cunningham, Fordham College at Lincoln Center (FCLC) ’21 and the president of Fordham’s Filmmaking Club, served as photography director. Their film’s protagonist is a scam artist who sells items he falsely claims have been used by celebrities. When the buyer of “Elijah Wood’s” half-eaten pizza slice uses the item in a vicious voodoo ritual, the scammer himself ends up becoming the victim of otherworldly torment.

“I always really wanted to make a movie with a pentagram to be shown at a Catholic university,” Wagner quipped, on how he conceived the idea for the plot. “It was something that has been on my bucket list.”

Because the allotted filmmaking time was so short and the creators had already conceived of the film’s premise prior to the festival, advance development was crucial to their process.

“We already had the script, and all the props and costumes were laid out within the first day of Campus Movie Fest,” said Wagner. “We spent two days shooting so that we could have the whole last four days editing, which we used to the maximum, and we also had someone do the music for us ahead of time.”

Not all the filmmakers took as much time for prior planning. Director Gill Kwok, editor Shannie Rao and cinematographer Caitlin Bury, FCLC ’22, did not use the full week to develop their film, “Simple Thing.”

“We made it in about a day and a half, actually, from the time when we came up with the idea to the time that we finished editing,” Rao said.

“Simple Thing” follows two friends as they work to keep in touch long-distance. The story has special significance to the creators, as they met through their common love of filmmaking. CMF gave them the opportunity to create their first project together.

“I think we also want to work on something that hopefully isn’t under such time constraints, and that we can spend a little more time on and put our heart and soul into,” said Kwok. “But sometimes it’s fun when you have constraints because that brings out some creativity that otherwise wouldn’t have been sparked.”

“It’s a film about friendship,” she added, “and I don’t think we did it on purpose, but we have all really enjoyed each other’s friendship throughout this year and it ended up kind of being a symbol of how our friendship has grown.”

The filmmaking process of Daejah Woolery and Cathleen Freedman, FCLC ’22, had a similar basis in friendship. Their group of seven freshmen submitted four films to CMF. The last one was created entirely on the submission date. The group hosted an Instagram “fan competition,” saying they would undertake this fourth project if their behind-the-scenes post got enough likes.

All four films were entered in the Women in Film category, which highlights movies that have creative teams with female majorities. Their films were not chosen for screening this year, but they were glad to have created female-led projects.

“[It] was really cool to have that majority that you don’t really see in the film industry — we narrowly got it in ours,” said Woolery. “All four were female-led, and actually [in] all four, the story idea came from a woman.”

In the event’s culminating awards presentation, the biggest winner of the night was “Neil’s Water Review.” Neil Khilwani, FCRH ’22, created and starred in the film in which he tests various water fountains on the Rose Hill campus. His film was the only submission to receive two awards: the Audience Award and one of four Jury Awards.

“Water Review” and the other Jury Award winners will go to CMF’s national film festival, Terminus, and potentially be included in the Cannes Film Festival.

All Fordham submissions can be found on the CMF website.