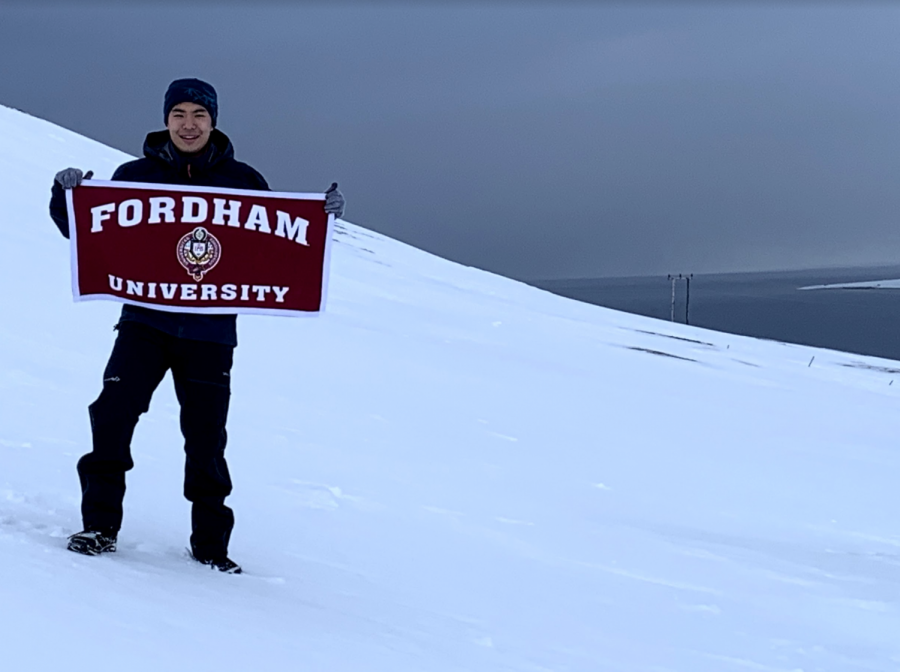 To train, Pang ran in subzero temperatures above the Arctic Circle.

Jonathan Pang, Fordham College at Lincoln Center ’19, had big plans for April 2019: He was going to run the North Pole Marathon, the northernmost marathon in the world. The race takes place at an international North Pole camp called Barneo on a sheet of ice approximately 20 to 30 miles from the true North Pole, and the participants run in roughly three-mile-long laps to cover the full 26.2.

Unfortunately, for the first time in almost two decades, the marathon was canceled.

The Facebook page, race website and emails sent to Pang in preparation for the race repeatedly stated that anything can happen when traveling to the North Pole.

Weather can change and flights can get delayed, meaning the race can sometimes be pushed back by a day or so. Most years this isn’t a problem; during this time of the year in the Arctic, 24-hour daylight ensures that the race can happen at any time.

When Pang arrived in Longyearbyen, Svalbard, the Norwegian archipelago where he would fly to Camp Barneo from, he had already received word that the race would be delayed to some extent. The next day, he was presented with even more concerning news: The marathon, originally scheduled to take place at some point on April 9, was rescheduled for the 16th.

Pang and the other competitors were informed that there were problems securing a plane to make the journey to the ice. Only a specialized type of plane is able to land on the 1,500-foot runway at Camp Barneo.

Shortly after, Oliver Wang, the director of the company that organizes the race, Runbuk, announced that the race was canceled entirely.

The problem that stopped the race from happening altogether was unexpected, even for North Pole standards. Although the competitors flew to the sheet of ice from Norwegian territory, Camp Barneo is Russian-owned. The relationship between Ukraine and Russia, however, was what froze the race in its tracks.

In September 2018, Ukrainian president Petro Poroshenko announced and signed a decree stating that he did not intend to renew the Treaty of Friendship, Cooperation, and Partnership between Ukraine and Russia that had stood since 1997.

The treaty expired on March 31, 2019, just days before the competitors arrived in Svalbard.

The Antonov 74 plane used for years to land at Camp Barneo is owned and operated by a Ukrainian aircraft manufacturing and services company called Antonov State Company. Although the plane was already in Longyearbyen, because of the expiration of the treaty with Russia, Ukraine revoked flying privileges to the Russian sheet of ice and set new requirements for all aircraft going north of 80 degrees latitude. Longyearbyen is at 78 degrees latitude, and the North Pole is at 89.5 degrees latitude.

Runbuk looked into hiring a much smaller Basler BT-67 plane to get the runners to the ice. This type of plane is a remodeled version of a Douglas DC-3 plane most commonly used to transport skiers.

The new plane would only be able to carry six passengers at a time. Any pilot flying to Camp Barneo has to expect that they might not be able to land the plane, meaning the plane must be able to carry triple the amount of fuel needed for a one-way trip in anticipation of making a round-trip back to Svalbard.

It would have taken the six-seater plane almost three days to transport the entire group of runners.

After the race was canceled, Pang and the rest of the runners were refunded for their hotel and part of their airfare to Svalbard. They have also been guaranteed admission to the race in 2020.

Pang has been running for almost a decade. He was born in China and conveniently lived next to Century Park in Shanghai. He started running short distances there until he could complete the entire ring of the park.

He started running initially to lose weight, and in the process transformed himself and his father, who accompanied him on many runs, into passionate runners. His father traveled with him to Svalbard to compete in the North Pole Marathon as well.

In preparation for the race, Pang ran 20 to 25 miles a week outside in Manhattan and even practiced in New Hampshire to expose himself to colder temperatures. As the race got closer, he started to increase his mileage and was running four to six miles a day.

All of the training won’t go to waste, as Pang will be running the Chicago Marathon in the fall.

Pang did get in some miles in Longyearbyen and even managed to run a half-marathon. “I brought my gear, and it was cold enough in Svalbard, I would say zero to minus 10 degrees Fahrenheit.”

While Pang hoped for more than just extra early preparation for Chicago, he wasn’t entirely disappointed by his trip and looks forward to returning next spring. “It was a fun experience,” he said. “It prepared me for next year.”