Much Ado About Something: An Offender’s Guide for Sustainable Egoism 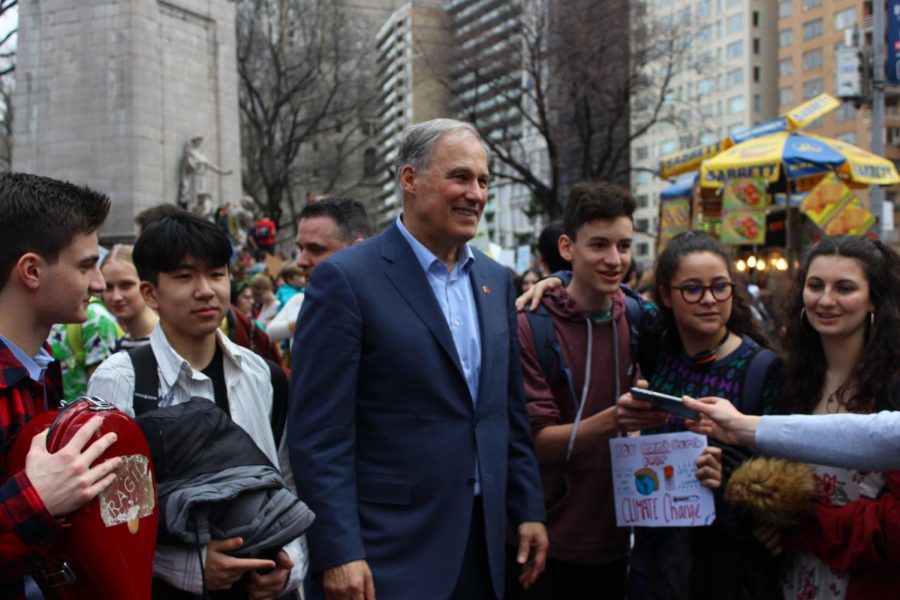 Washington Governor Jay Inslee recently visited Columbus Circle in support of combatting climate change, which is a core feature of his campaign.

When the 2018 Intergovernmental Panel on Climate Change Report, was released last year by the United Nations in October, the general public was given a clear ultimatum regarding our current standing in the trajectory of the climate crisis. Among the most notable results was the conclusion that we must find a way to indefinitely avoid a net warming of more than 1.5 degrees Celsius by the year 2030. If we do not sufficiently alter our lifestyles and reduce our emissions by this time, we will face the spiraling effect that comes with a warming climate. According to David Wallace-Wells in his New York Magazine article “The Uninhabitable Earth,” this will include rising seas, ocean acidification, and increased droughts, and other severe weather conditions that will severely impact our ability to feed and provide for ourselves as a society.

Obviously, such an alteration is far from a straightforward task. To limit global warming would mean a complete restructuring of the global economy. As postulated by environmentalist Bill McKibben in his book “Eaarth,” restructuring would branch far beyond the already tumultuous task of shrinking the fossil fuel industry. McKibben argues that we would need to fundamentally change how economic prosperity is rationalized. Specifically, this would mean a shift in a company’s goals from those that point towards short-term gratification to those that might favor slower growth and long term stability.

I find it incredible that, with fewer than 11 years before 2030, we as a human society are still failing to produce a unanimous movement to evoke a change. I believe this to be resulting from a fear of taking the first step outside of an arena in which we have grown so comfortable.

Granted, we have had little chance to process so terrifying an ultimatum outside of dubious Mayan prophecies or sensationalized doomsday films starring the likes of Dwayne “The Rock” Johnson. As much as we would all love for the charming ex-wrestler to muscle us out of this predicament, we are instead tasked with reckoning with the uncertainty of our future — not only as individuals, but also as a society of self-proclaimed intelligent beings. As such beings, it is confusing that we (specifically within our own country) are having such difficulty in taking the steps required to secure our and future generations.

This geopolitical lag in activity can be described as a clash between the pursuit of individual advancement and the preservation of ourselves as a collective species and civilization. We often point to figures like oil tycoons and pesticide manufacturers for being selfishly egoistic at the cost of a greater good.

Yet I believe that psychological egoism, the idea that all human actions are motivated by self interest, can be a useful tool if we act on the needs of our species overall. We won’t cut down on fossil fuels or preserve biodiversity to maintain the health of the earth’s ecosystems. Rather, we will make these changes because selfish reasons, like economic incentives, the intrinsic value that they provide to our civilizations and the need to survive.

Environmentalism is often associated with tree-hugging frivolities and an ignorance of a business’s “bottom lines.”  However, without further regulation and a motivation to perform the tasks outlined above, we will undoubtedly face the consequences of environmental degradation.

Some may argue that it would be an act of hubris to try to save the planet and conserve so large and complex as the global climate. In response to such a defeatist mindset, I would point to the young leaders emerging from the woodwork like 16-year-old Swedish activist Greta Thunberg. As described in a March 2019 interview by The Guardian’s Jonathan Watts, Thunberg’s “school strike for climate” movement has motivated children in over seventy of countries around the world. I would also point out Recover Brand’s “Class of 0000,” which calls for graduating college and high school students to demand zero carbon emissions plans from their political representatives.

Those who agree with the “grounded” naysayers who feel there is nothing to be done may also disagree with the idea that human civilization has jolted the planet into a new geological epoch. This period, called the “Anthropocene” by geologists such as Paul Crutzen, signifies that we are indeed capable of having evoked large scale geological change. This conclusion is not a boast, but rather an acknowledgment of guilt and responsibility to own up to our wrongdoings.

We are the only species that we know of that has achieved the formulation of a civilization. If we can attach such cosmological significance to this that it justifies our drive to persist, it should also justify the protection of the other uniquely advanced forms of life that habitat our planet. Regardless, it just so happens that the survival of our own species is tied to our (probably reluctant) neighbors.

Those who find this image as attractive as I do should all look to find our own climate justice heroes. All life on earth has adapted to a climate that is rapidly changing. Mitigating such a change is in our best interest if we would like to continue to give this whole “humanity” thing a shot.