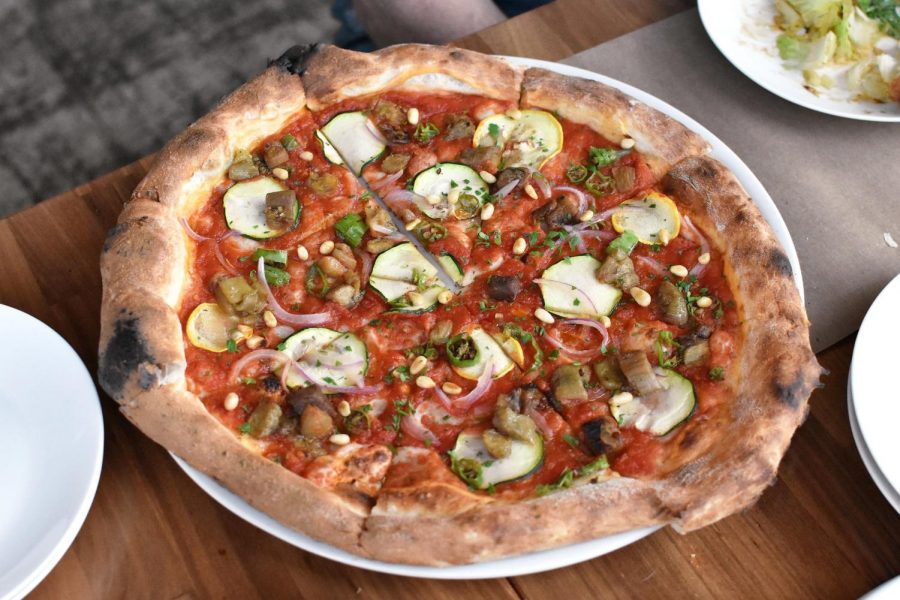 Vegan pizza is just one of the delicious vegan dishes you can find off-campus.

Sometimes your school and work day is just too hectic to cook. Sometimes you run out of groceries. Sometimes the meal options on campus will not satisfy your cravings. So you splurge and take a look at all the options this city has to offer.

Have you ever thought about the vegan options? New York City has numerous restaurants welcoming carnivores and vegans alike. There is much more to vegan eating than salads.

Think about your favorite food and imagine it veganized. You have a promising chance of finding it somewhere in the Big Apple.

If you are trying to think of easy ways to help save the planet, you can start with what you put into your body. Eating meatless or vegan once a week helps cut down on energy used to raise livestock, reduces air pollution and saves water. Additionally, a vegan lifestyle is healthier for your heart and helps save animals.

In a recent survey, 15 students at Fordham College at Lincoln Center (FCLC) selected their favorite vegan restaurants in the city.

Six students chose By Chloe, a fast-food style vegan restaurant with several locations around the city. Students like this restaurant for its somewhat reasonable prices and note that it does not taste vegan.

From the menu, students enjoyed the fries, spinach and artichoke dip and pesto meatball sandwich. Aidan Donaghy, FCLC ’21, enjoyed a burger here with his friend a few weeks ago. The only thing he wished was different was the price.

Maria Hayakawa, FCLC ’22, enjoys the veggie burger and cauliflower mac and cheese from By Chloe as well.

Another popular restaurant  among students is Blossom Du Jour. One location is in the nearby Columbus Circle Turnstyle. Here, students can find quick and comforting meals like sandwiches, green and grain bowls, fries and mac and cheese.

Daniel Nasta, FCLC ’19, has been going to this restaurant for a few years now and is making his way through the menu. He likes sandwiches such as the Midtown Melt along with the restaurant’s fries. He said he has never gotten a meal that he has not enjoyed.

“It’s really the seasoning and condiments on the sandwiches that are really astonishing,” he said. “It’s completely delicious.”

If you have a sweet tooth, students recommend Peacefood Cafe. Featuring a full menu of vegan sandwiches, salads, their well-known chickpea fries and pizzas, this restaurant also has its own full-bakery case which features desserts like chocolate cake and jumbo frosting-filled cookies.

Esmé Bleecker-Adams, FCLC ’21, said her favorite items on the menu are the chickpea fries and strawberry shortcake.

Candle 79 is another popular vegan restaurant. This one is certainly more upscale, so it would be an ideal spot for a birthday or special occasion. With three different locations, the restaurant serves Italian, Asian and American entrées like seitan. Though a pricey choice, one can certainly expect a fine-dining experience at this place.

XYST is another more expensive option, if you are looking for a cozy place to gather with family and friends in Chelsea. This restaurant boasts nutritious, appetizing food, such as grilled eggplant and hummus, with lemon meringue pie as an option for dessert.

Hayakawa noted she had a tasty fig and vegan cheese dish when she went there.

Frances Murray, FCLC ’22, who is a pesca-vegan, explained that vegan food can be found throughout the city. She said vegans should not just restrict themselves to all-vegan restaurants, because vegetables can be found anywhere.

Likewise, even non-vegan can try a vegan meal at the next restaurant they go to. It might just end up being a favorite dish on the menu, and it will help to save the planet.