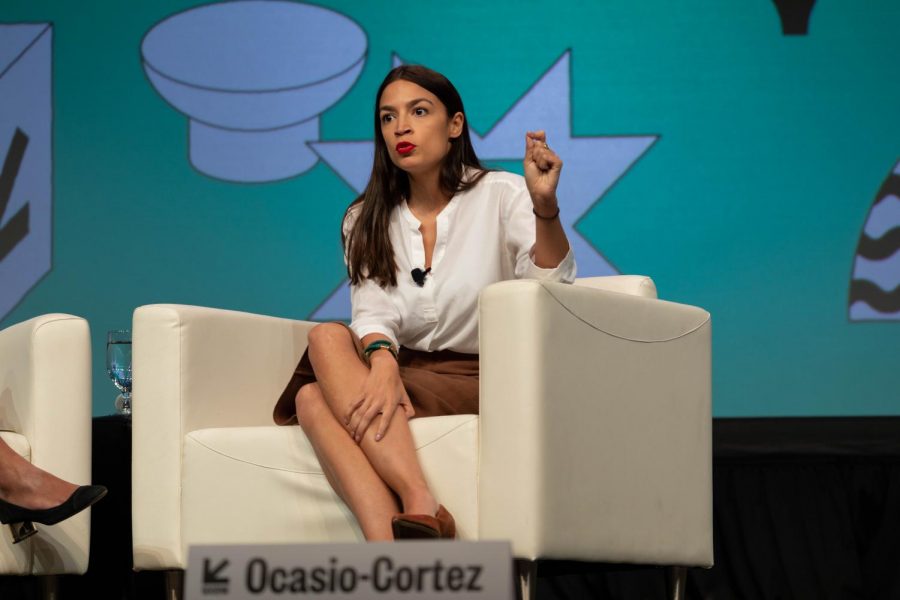 Some criticism leveled at Alexandria Ocasio-Cortez is warranted. Some is definitely not.

By LEO BERNABEI and JANIRA PLANES-FRIAS

You may not know who your congressperson is (even though you should), but you are probably familiar with these initials: AOC. Alexandria Ocasio-Cortez is currently the youngest member of Congress and arguably one of the most controversial.

Several weeks ago, Ocasio-Cortez and Fordham professor Henry Schwalbenberg met at the United Nations. According to a lighthearted-turned-controversial post on Fordham’s Instagram, they had met to discuss U.S. international humanitarian development assistance, along with Fordham’s work with Catholic Relief Services. The post garnered a lot of comments such as, “Maybe teach her………Economics?”; “Hopefully the meeting was to talk some sense into her. I still cannot believe she was elected” and “A university charging 70k sharing a meeting with a socialist ‘congresswoman.’”

Other commenters went to bat for Ocasio-Cortez, claiming that the uproar over the university’s post was uncalled for. One commented, “imagine being so soft that you get offended by a picture of a professor with a sitting politician.” These scornful comments about AOC are made on a rather small scale, but it’s no secret that they display a microcosm of what takes place ubiquitously in conservative circles.

As an American conservative and a European liberal, respectively, we hold different political convictions, but we both agree the criticism Ocasio-Cortez receives is trivial.

As a young, aspiring public servant myself, I am inspired by representatives like Ocasio-Cortez, who don’t sit patiently and wait their turns to run for office. Her courage and audacity is something I hope to emulate. Attacking her based on her college history, background or dancing skills is not productive. It is reminiscent of Democratic attacks on President Trump’s accidental malapropisms, hair and health.

As a realist and a Republican, I am worried that her political philosophy is picking up steam, and quickly. With many in the American public already supporting ideas like single-payer healthcare, it’s no secret that democratic socialism is on the rise in the United States. Simply because this ideology functions well in certain small, ethnically homogenous European countries does not mean that it would work in the U.S. So naturally, it amazes me with how relatively little time conservatives spend criticizing Ocasio-Cortez’s actual policies and proposals.

It seems that nearly every week on Twitter, prominent conservatives are out in full force attacking Ocasio-Cortez for something petty, antiquated or both. Even while much of the criticism of her dancing video came from one account (whose owner deleted it and subsequently his own handle after the ensuing visceral outrage), it is clear that conservatives feel threatened by Ocasio-Cortez’s rise and gravitas, despite her holding a relatively unpowerful position within her own caucus, not holding any rank within the Democratic Party leadership.

Instead of attacking her on absurd and pedantic grounds, Republicans (and even centrist Democrats) would be much better off criticizing her over her substantive policy proposals. I’ve noted that many of her ideas, such as the Green New Deal, would require levels of funding and economic shifts so drastic that they have potential to unleash horrendous consequences, such as, for starters, tremendous debt. It should not be hard to criticize with serious and tenable arguments a sitting national representative considering how off-base and unprecedented her ideals are.

Sure, it might be funny and easy to make fun of her for a slip of the tongue when she mistakenly identified the three branches of government as the Presidency, House and Senate or when she falsely claimed that the world will end in 12 years if we don’t tackle climate change. But just as Trump’s followers see his talking points as tangentially correct while possibly factually wrong, Ocasio-Cortez’s followers see it the same way.

So before Fox & Friends starts going off on her comments about “cow farts” or abstaining from eating hamburgers, let’s all take a step back and think about the issues we actually need to have fundamental debates on.

All of this Ocasio-Cortez hype is not just a phenomenon in the United States. She is a politician many Europeans keep an eye on. For example, her Green New Deal proposal has reopened the very urgent and necessary conversation about climate change in the European Parliament.

Originally from Barcelona, Spain, I watched the 2018 midterm elections overseas and closely followed AOC’s exponential growth in popularity both in and out of social media. Now living in New York, I can connect the dots and understand the hateful comments Alexandria Ocasio-Cortez received on Fordham’s Instagram post. It all goes back to one term: socialism. And how Europe and the U.S., despite both being Western societies, have completely different conceptions of the term.

Bobby Ghosh, a member of the editorial board of Bloomberg, put it this way: “To say that you are a socialist [in the United States] is like declaring yourself a fascist.” Socialist policies are dispersed all over Europe, and some of the countries that are doing better, like Iceland and Sweden, have governments that function mostly on socialist policies. That is why Ocasio-Cortez is admired in Europe and deeply questioned here in the States, where, instead of looking at Europe, Americans talk about — mistakenly, may I add —  Venezuela.

Aside from that issue, Ocasio-Cortez is doing something really interesting with social media. Out of the 105 million U.S. Instagram users, 64% are between 16 and 29 years old. She is talking to the teenagers and young adults who have just gained the franchise. She is showing that a politician is not someone unreachable, nor an unattainable position. She is changing political communication one Instagram Live at a time, and she is connecting with young millenials who could possibly vote for her if she ran for president one day. It’s no wonder the young Republican Matt Gaetz wants her on his team and even calls her “adorable.”

AOC has global appeal. As politics swing toward the extreme, she’s captured the interest of those on both sides of the political spectrum. How she will weather future criticism leveled at her — warranted or not — will be of great interest to everyone.