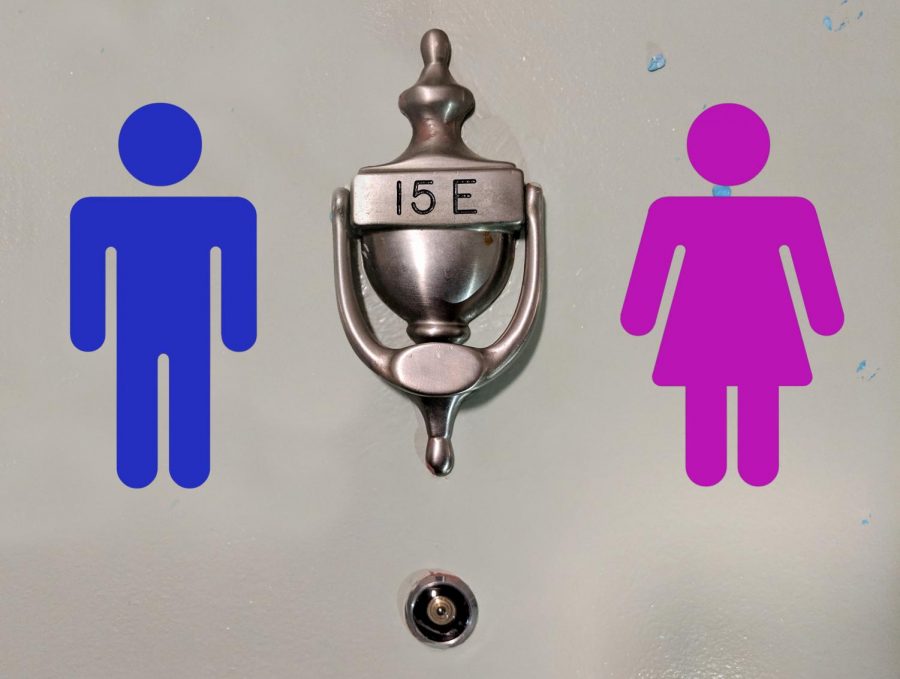 Dean of Students Keith Eldredge said that "the university is not ready for gender neutral housing at this time."

On Oct. 31, 2018, protesters from the student-organized transgender rights rally marched to the second floor of the Lincoln Center Lowenstein Building and slid an open letter  to administration under the door of the vice president’s office. It demanded the university support for the LGBTQ community.

One month later, Jeffrey Gray, vice president of student affairs, wrote in an email to a handful of club leaders and faculty that while university administrators “unequivocally condemn” hateful actions and speech against transgender individuals, further measures would “take more time and discussion.”

Nearly five months later, neither Gray nor any other administrators have offered an update.

One demand of the open letter was to address policies in the Office of Residential Life that discriminate against transgender individuals. Students have accused the office of creating a transphobic rooming environment by forcing students to live with roommates based on their sex assigned at birth, not their gender identity.

Fi Whalen, Fordham College at Lincoln Center (FCLC) ’19 and co-president of The Positive, a student group that celebrates and supports gender nonconforming students, said the policy promotes the concept that gender is binary. “These rules get at the absurdity of institutionally mandated sex and gender segregation,” they said.

At the transgender rights rally, Jay Sheldon, FCLC ’20 and a transgender person, said that being treated as a man and being forced to live with other men was instrumental in aggravating their gender dysmorphia and consequently took a toll on their mental health.

Jenifer Campbell, senior director of residential life, explained that the office works with students like Sheldon on a case-by-case basis in relation to their gender identity.

On Nov. 13, 2018, two weeks after receiving the letter, Gray wrote that the university administration is “currently having internal discussion” about the students’ demands.

“This involves a complicated set of issues, which will take us some time and constructive dialogue to work our way through,” he said. “We’re not yet at the stage where we can discuss this in more detail.”

On March 11, 2019, Campbell stated that the office has been actively working with student organizations to discuss the status of transgender students living in residential halls.

However, Whalen contradicted Campbell’s statement, explaining that student organizations had not yet met with the Office of Residential Life. The first meeting between the office and student groups was scheduled for April 8. Attendees included The Positive, Rainbow Alliance, United Student Government and Residence Hall Association.

At the meeting, Keith Eldredge, assistant vice president and dean of students at Lincoln Center, stated that “the university is not ready for gender neutral housing for all students at this time.” However, the administration does want to take measures to support transgender students more “effectively in the future,” he said.

Whalen expressed concern about this before the meeting; while The Positive and other LGBTQ groups would like to see a housing policy that allows students to choose who they live with, they doubt it is feasible at Fordham.

Because Fordham is a Catholic institution, Whalen said, “we are constantly trying to propose digestive, palatable and realistic plans that the university will even consider.” Although there is “no official policy regarding transgender individuals in the Catechism of the Catholic Church,” according to the Human Rights Campaign, “doctrinal teachings clearly equate birth anatomy with gender.”

In preparation for the meeting, Whalen said that they would be “proposing ideas that will work within the existing framework of housing at Fordham.” Presently, the changes that The Positive and other organizers are proposing will lead to “a much smaller gain for the trans community,” Whalen said.

“We are forced to ask ourselves how much are we are willing to give up to try and get a policy that is at least less violent than the ones that are already in place,” they added.

For many students, these housing policies have serious consequences. Aria Lozano, a transgender person who is a former Fordham student but has since transferred to Columbia University, was forced to live with a man her freshman year after finding no alternative options. She said in an op-ed for The Observer in April 2018 that if she were aware of these policies, she would have never come to Fordham.

“Because of atrocious policies at Fordham, I feel like I do not belong here on campus, and that I must either transfer out or, at the very least, find off-campus housing,” she wrote.

Some resident assistants (RAs) and resident freshman mentors (RFMs) have also expressed their concerns about the policy, believing that it hinders their abilities to care for their residents adequately.

In multiple instances, transgender and gender nonconforming students have asked to live with students that they feel comfortable with rather than the gender they were assigned at birth, according to RAs. However, Residential Life only allows this after a student has legally changed their gender.

“There is a lot of privilege in being able to change your gender, and to have the resources and support to go through that process,” said one RA who wished to remain anonymous because of their contract with Residential Life. They said that the policy does not support the average student and does not account for the realities of being transgender.

Residential Life provides the option for gender nonconforming and transgender students to be placed in single rooms in McMahon.

“It feels weird to me that a person that is trans should have to uproot their lives and home on their floor just to be comfortable,” the RA said.

“The only real options are to pay for a very expensive single room or live in space with those in your assigned gender, which can be unsafe and is, frankly, unfair,” they added.

An RFM, who also asked to remain anonymous because of their contract, echoed the RA’s concerns. “With the current policy,” they said, “it is increasingly difficult to help and support our residents as there is nothing that serves their needs in this matter.”

RAs and RFMs have expressed these frustrations to Residential Life in the past. When students spoke up at summer and winter trainings, they said they were met with the usual explanation that the office works with students based on their individual needs.

“It sucks to be the enforcer of policies you don’t believe in while also trying to be the support person,” the RA said. “Once someone hears ‘no’ or can’t get a tangible solution from you, they don’t feel supported and pull away. Then it just becomes hard to do our jobs as RAs/RFMs.”

“There is no official policy on how to deal with that situation,” the RFM explained.

The question of transgender students’ housing rights comes amid a year of intense scrutiny towards the Office of Residential Life. Students have expressed dissatisfaction with the communication about overcrowded apartments, price spikes related to de-tripling rooms and untimely residential hall closures.

Another demand of the open letter was to ensure a greater respect for transgender and gender-nonconforming students’ pronouns.

Chief Diversity Officer Rafael Zapata has been successful in planning a new chosen name policy that is expected to take effect in the Fall 2019 semester. However, many believe that the policy is still not inclusive of the transgender experience.

Unlike the new policy, the initial policy, which was crafted by The Positive, included both the option of a chosen name and preferred pronouns.

“I still argue that the policy is incomplete as it does not address pronoun usage,” Whalen said.

The chosen name policy will include anyone on campus who prefers to go by another name for a variety of different reasons.

While the policy will impact a large portion of the Fordham community, Whalen said that “essentially, by broadening the policy, it does not have the same intent that many academic departments and organizers wanted.”

They also noted that a student feedback period never occurred  and that “the policy was released without talking to the initial students who had expressed concerns.”

Whalen believes that the frustration with both Residential Life and the chosen name policy is a recurring problem with administrators. “By not being transparent, the administration can be less accountable in the future for their actions and choices,” they said.

The administration has claimed that its Jesuit values influence and dictate their policies. However other Jesuit schools, including Georgetown University, The Universities of San Francisco and Saint Louis have launched initiatives to support transgender and gender nonconforming students.