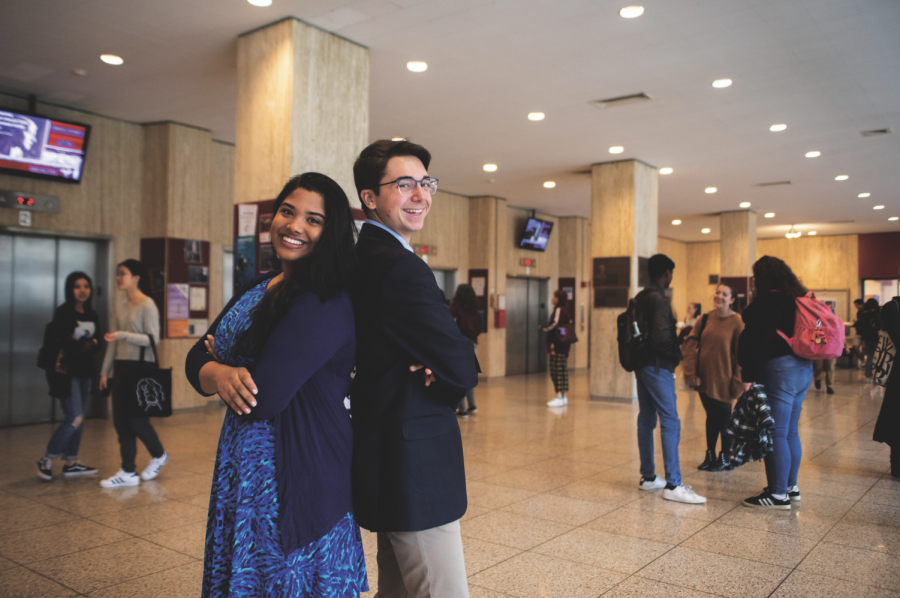 Tina Thermadam and Robert Stryczek will lead USG during the 2019-20 academic year.

The president-elect and vice president-elect of United Student Government (USG) can breathe a little more easily than they could last week. What What was a contentious election cycle is over, as the focus shifts back to their responsibilities of the offices.

“I really feel like the president is the brains and the vice president is the soul,” said Robert Stryczek, Gabelli School of Business (GSB) ’21 and vice president-elect of USG, about working alongside Tina Thermadam, Fordham College at Lincoln Center ’20 and president-elect. The two will serve USG for the upcoming school year. Thermadam believes her conversations with the Fordham student body were fundamental in encouraging students to vote. “I want to be as connected as possible to as many people as I can,” she said.

For much of the race, Thermadam’s platform focused on building the Fordham community, increasing the enjoyment of leadership roles in clubs and the availability of menstrual products for students. As the president-elect for the next academic year, she has re-emphasized her accessibility to the student body and affirms, “you can talk to me, and I’ll listen.”

A focal point of Thermadam’s goals for next year is club retention. She hopes to prepare club leaders with the tools to manage clubs efficiently. She believes this will encourage students to join clubs and build the Fordham community.

Thermadam looks forward to students resorting to her as a source of help. “I have a good communication platform with the administration,” she said.

She explained that she developed this relationship through her extensive involvement in other clubs, which puts her at an advantage to advocate for students. “The entire floor of Argo is my home, my little family,” Thermadam said, as she has become accustomed to spending her time in the Office for Student Involvement.

Thermadam’s campaign had some similarities to that of opponent Austin Tong, GSB ’21. Tong was also keen on interacting with the student body. According to multiple freshmen, Tong was able to follow newly admitted Class of ’22 on social media before they even arrived at Fordham in one of USG’s longest and most publicized races.

Stryczek, the self-described “soul” of the operation, seeks to bring a spirit of realism to help balance and add perspective to the issues USG seeks to resolve throughout the year. He considers his realistic approach to problem-solving is what makes him a qualified vice president. “If anyone ever has any ideas that are too big, I always question them,” he said.

Stryczek, whose decision to run was heavily rooted in his love for helping people, jokingly expressed, “I look forward to all the pranks I’m going to pull on Dr. Dorothy [Wenzel],” senior director of Student Involvement and advisor for USG. His humor is visible in his campaign posters, in which he abbreviates his name, Robert A.M. Stryczek, to R.A.M.S.

Stryczek cites outgoing vice president Katina Smith as a large influence on school spirit at Lincoln Center, and hopes to build upon her ideas. “I want to do a lot of spirit week stuff,” he said. “I want to give more soul to Fordham.”

He said his leadership roles in other clubs and programs such as Fordham University Emerging Leaders (FUEL) and Commuting Students Association (CSA), have familiarized him with the demands of being a leader and created a bond between himself and the administration. He emphasizes his commitment to Fordham, as he claims, “I go to everything, I meet all the new people, I’m friends with all the administrators.”

Thermadam looks forward to working alongside Stryczek. She said, “We’re really good friends and we get along very well, so we knew that we’d be a good team.” The two claimed to have extensive knowledge about the ins and outs of student involvement, as their involvement has required them to invest considerable hours into numerous clubs and organizations on Fordham’s campus.

Moving into next year, Thermadam has narrowed her focus toward her role as president as she anticipates the responsibility and time commitment required to fulfill this role.

Although Thermadam’s priorities are now geared toward her forthcoming presidency, she said she will still take the time to enjoy her favorite chocolate mousse cheesecake at Veniero’s Bakery. Likewise, Stryczek said he will still be dancing the night away at his favorite concerts, such as those of Elton John and Billy Joel.