Give Country Music a Chance 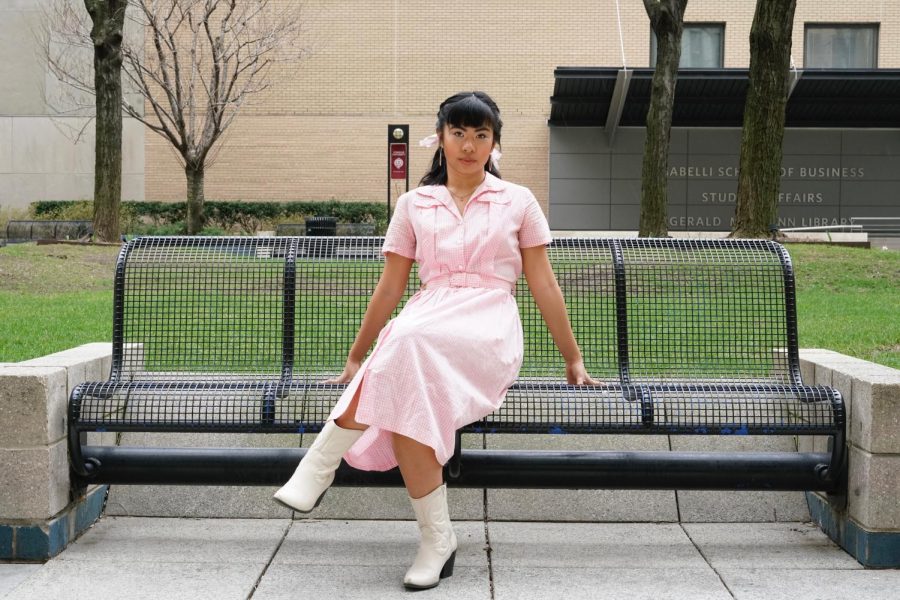 Roxanne Cubero, FCLC '22, shows her "yeehaw spirit" in celebration of the diversity of modern country.

You’ve probably heard (or said) this before: “I like all music —” pause for emphasis — “except country music.” It’s a tale as old as time; even I was once appalled by the sweet croons of steel guitars. I have vivid memories of my father cruising down Texan highways, Waylon Jennings wailing in the family Ford F150. Country music’s presence in my life was simply happenstance, but I think I drowned out the banjos with my daydreams. To be frank, country music didn’t truly enter my life until after I moved away from home.

In the advent of “yeehaw culture,” in which southern slang and Western wear have permeated both “stan” Twitter and the fashion world, why is country music still frowned upon? Why has it failed to attain the same respect as other genres? It’s not all trucks, women and booze.

At the heart of country music lies stories, acoustic instruments and strong vocals.

The first songwriters of country music, isolated in the Appalachians, only had stories of love, infidelity, despair and redemption. These stories are not only real, but universal. The most successful country music carries that tradition of passing on real stories. These can be literal stories; for example, in Marty Robbins’ “El Paso,” each verse progresses through a cowboy’s fatal affair with a Mexican maiden. Or, in the case of Brooks & Dunn’s “Neon Moon,” these can be thematic stories. Everyone may not relate to days wasted under neon bar signs, but everyone can likely relate to the grief of losing a lover.

Historically, instrumentation in country music is minimal. It should typically sound as though you made the song on mama’s back porch. The first instruments used were the acoustic guitar, the fiddle, the banjo and the piano. Until the 1940s, drum kits were considered “too loud” for country music. Even in 1944, Bob Wills’ drummer was forced to play behind a curtain at the Grand Ole Opry, the weekly stage concert in Nashville that made country music famous. Around the same time, the steel pedal guitar — the instrument that would give the genre its signature twang — was first introduced.

In addition to stories and acoustic instruments, vocal prowess is the third part of country music’s trifecta. From Johnny Cash’s brutal baritone to Hank William’s youthful yodel to Patsy Cline’s ageless alto, there’s a singing style in country music that will appeal to anyone. George Strait, whose career spans nearly four decades, still sounds as good now as he did in his heartthrob days during the 1980s.

Now that you know what country music intends to accomplish, let’s talk about where it went wrong. If you dislike country music, your opinion is valid and, based on the country music you’ve probably heard, probably justified.

Country music, unfortunately, is dominated by white men. While many iconic country songs were the contributions of white men, Nashville’s blue-eyed beefcakes are starting to sound monotonous and boring. Singing of only one perspective of life is detrimental in a genre rooted in stories. Imagine the equally iconic music that women, people of color and queer people could contribute.

In the prime of their careers, George Strait and Alan Jackson surprised the audience at the 1999 Country Music Association Awards with a performance of “Murder on Music Row.” The song laments that “The steel guitars no longer cry / and fiddles barely play / but drums and rock and roll guitars / are mixed up in your face.” The performance, which was essentially a middle finger at Nashville from their best-selling superstars, stunned the audience. They were pointing out the painfully obvious: country music doesn’t sound like country music anymore.

Strait and Jackson were singing about the “bro-country” that would gain traction in the 2000s, also known as the kind of country music that made everyone hate country music. Though this form of country rose to popularity at the turn of the 21st century, it’s the result of a desire for country music to be socially accepted from the mid-1950s. Ever since, country music has essentially been playing catch-up with pop music. As Grady Smith, Youtuber and music critic, put it, “country music is just doing a way worse version” of whatever is trending in pop music.

As we near the end of the 2010s, the latest trend in pop music — and subsequently, country music — is the use of drum loops and snap tracks, betraying the genre’s tradition of using real instruments. Recall that drums were once an instrument of scorn in country music. Now they aren’t even using real drums. In a genre that celebrates musicianship and stories, the monotonous beats over trivial guitar chords invite listeners to zone out and ignore the lyrics, thus ignoring the story.

Having bastardized country music’s instrumentation, bro-country also ceased storytelling. The laundry list of key words and phrases of trucks, booze and women has trivialized the genre. However, this is nothing new.

In a spoken retelling of a correspondence with songwriter Steve Goodman in his 1975 hit, “You Never Even Called Me By My Name,” David Allen Coe satritically lists country music cliches, lamenting that the song didn’t mention “mama, or trains, or trucks, or prison or getting drunk.” Goodman subsequently wrote another verse for the song to make it a “perfect country and Western song,” showing everyone just how ridiculous these cliches are: “I was drunk the day my mom got out of prison / and I went to pick her up in the rain / But before I could get to the station in my pickup truck / she got runned over by a damned ol’ train.”

Today’s take on country music cliches is much more crude. However, the effect is still the same. No one gives country music the time of day because everyone expects every song to be the same. I will begrudgingly say these could be valid as “stories,” but I would argue that it becomes concerning (and annoying) when every chart topper is about dirt roads and cold beers.

I am a traditionalist, not a purist. I believe that country music must evolve, butstill hold on to parts of the past. Sometimes, I want to indulge myself in some rock-infused honky tonk; I won’t hesitate to blast Brooks & Dunn’s “Boot Scootin’ Boogie.” I also think that Kacey Musgraves’ self-proclaimed “galactic country” album “Golden Hour” is deserving of both Grammy awards for Best Country Album and Album of the Year.

Hear me out: Kacey Musgraves will save country music. Despite her talented contemporaries, Sturgill Simpson and Chris Stapleton, I must consider the 10-year cycles that country music goes through. Every decade, the genre seemingly tends to either attempt to mimic pop music or goes back to its laid-back and honest roots. As we near the end of the the 2010s, who knows what’s in store? Musgraves, however, seems to confidently look to the future while also honoring the past. With an inclusive message wrapped up in clever lyricism, she’s already enticing new, young audiences to give country music a chance.

“Golden Hour” is a much more accessible form of country compared to her previous albums, especially for those with an inclination towards pop music. However, the album still has the country essence that a lot of modern music lacks.

At first listen, “Golden Hour” sounds light years away from traditional country music. In particular, the more uptempo songs, such as “High Horse” and “Velvet Elvis,” feel like they belong in a European discotheque rather than a Southern dive bar. However, if you listen closer, each song is still powered by acoustic guitar. It’s the steel pedal guitar that doesn’t contribute a twang but an otherworldly sparkle. Even “High Horse” and “Oh, What a World” feature banjo solos. But Musgraves nods to the future as well in “Oh, What a World” by using light vocoder effects, contributing to the album’s ethereal ambiance.

However, she still lives by the country principle that less is more. In an interview with The New York Times, producers Ian Fitchuk and Daniel Tashian revealed that “Slow Burn” once had added strings and bass, giving it a fuller, Eastern-influenced sound. Musgraves, on the other hand, afraid that the listener would lose her in the music, cut it from the track. To her, instrumentation is powerful; she didn’t want “to get weird just for the hell of it.” Her minimalist tendencies have earned her the nickname “The Axe Man” in the studio.

Due to the mystical and minimal instrumentation, Musgraves allows her lyrics to stand in the spotlight. Her songwriting style is sassy, straightforward and sincere. She pokes fun at herself in “Slow Burn;” having been born premature, she hasn’t “been early since ‘88.” In “High Horse,” she takes the cliche phrase and turns it into a funky anthem against the self-righteous. In “Happy & Sad,” she earnestly describes the paranoia we feel when everything’s going right. She draws her lyrics from her own experiences and feelings, not from a laundry list of cliches.

Country and western cliches show up the most in the album’s seventh track, “Space Cowboy.” But they aren’t placed there to display Musgraves’s yeehaw-ness. Instead, she uses cowboy imagery to describe the bittersweet feeling of letting a lover go. She tells him to “ride away in your Silverado,” because, “when a horse wants to run, ain’t no sense in closing the gate.” Instead of falling prey to using country cliches, she purposefully turns them into poignant metaphors for real life.

Kacey Musgraves is one of many country stars that are upset with the lack of inclusivity in country music, and she values her “kinship” and “friendship” with the LGBTQ community. Her ballad “Rainbow” wasn’t intended to be a queer anthem, but a reminder to to anyone facing adversity that “there’s always been a rainbow hangin’ over your head.” In the music video, she nods to her large queer fanbase by featuring a young queer man among the cast of outcasts.

Though the gatekeepers of country radio turn a blind eye to her success, Kacey Musgraves is reaching audiences previously untouched. In an Instagram poll, I asked my followers if they liked country music. 57% said that they didn’t. As a follow-up question, I asked them if they liked Kacey Musgraves. 69% said that they did. What could possibly explain this paradox in which country music haters love the princess of country?

The answer is simple. People find comfort in being able to relate to someone. People enjoy being welcomed. Kacey Musgraves is able to connect with all kinds of people, not just the rednecks and hillbillies that country music typically caters to. She draws from her own life experiences while still creating content that anyone can relate to. I’m not one to point fingers and say what is country and what is not country, but this is country.