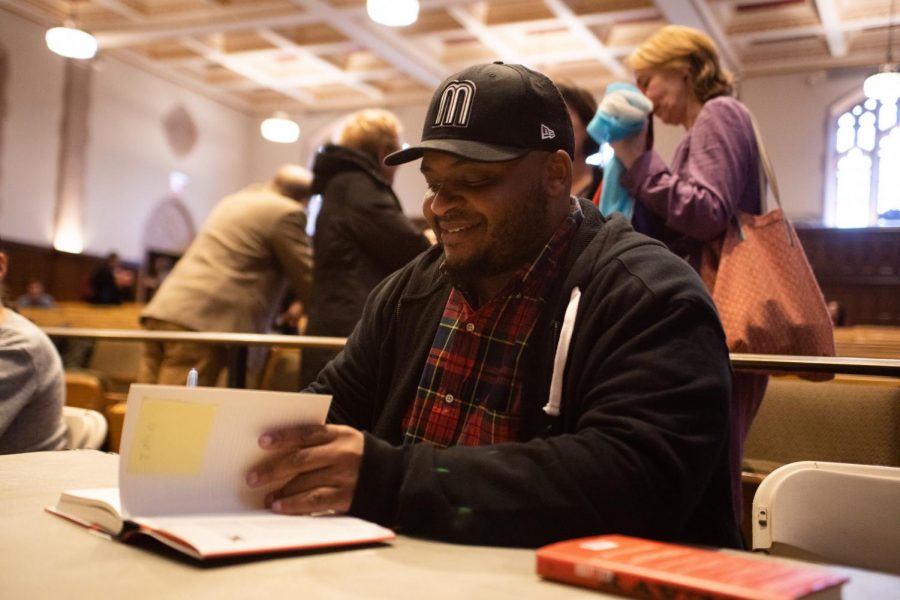 On April 3, Kiese Laymon, author of the memoir “Heavy,” was invited to speak at the annual Reid Family Writers of Color Reading Series at Fordham Rose Hill. Since 2008, the series has hosted some of the most acclaimed writers of color to Fordham’s campus in a hope to celebrate diversity in literature.

A native of Jackson, Mississippi, Laymon’s memoir is a reflection on growing up as a black man in the south and the events that shaped him into the man he is today. His story is told through the lens of his relationship to his mother, whom he refers to as a complicated black woman. Laymon addresses her as “you” throughout the memoir, a literary technique that is not often seen in memoirs.

The majority of audience members were there as part of a class assignment, as “Heavy” has been well integrated into many English class curriculums since its publication in October 2018.  Many student believe that this choice demonstrates departments commitment to exposing students to difficult themes and giving a platform to black writers like Kiese Laymon.

Laymon told the audience that the title “Heavy” was chosen to refer to both his weight and the themes presented in the book. “Heavy” deals with the topics of sexual violence, anorexia, obesity, gambling and sex.

Laymon’s work has been critically acclaimed; The New York Times described the memoir as a “gorgeous, gutting book that’s fueled by candor yet freighted with ambivalence.”

Alongside “Heavy,” Laymon has authored essays, stories and reviews for publications including The New York Times, Esquire and McSweeny’s. His works include the novel “Long Division” and his collection of essays “How to Slowly Kill Yourself and Others in America.”

Laymon read “Meager,” a chapter in his book from a section titled “Black Abundance.” He explained that he chose it because it is one of the few funny, lighthearted parts of the memoir. The chapter is about when, as a new students at a predominantly white middle school, he and the few other black peers worked to “rhetorically make the space ours.”

After the reading, the floor was opened up for questions from the audience. One student asked Laymon about obstacles he encountered while writing the memoir.

“The biggest obstacle I overcame was writing this book,” he answered. “I’ve been trying to write it since my first novel.”

He added that when he began writing, he felt like he “didn’t have the heart and the skill,” but that he felt he needed to continue to come to terms with his strained relationship with his mother.

Dennis Tyler, associate professor of African American Studies at Lincoln Center, said that the hearing the words read out loud by Laymon had “opened up some things for me about the memoir that I hadn’t anticipated.”

In the past, Reid Writers have included Junot Diaz, Tracy K. Smith and Terrance Hayes. These events are supported by donations from Kenneth and Frances K. Reid, and are sponsored by Fordham English and African & American Studies departments, the Graduate Student Association and the Creative Writing Program.

Update (April 11, 2019): A previous version of this article stated that Professor Scott Poulson-Bryant was an Undergraduate Assistant Professor. His position at the university has been corrected.