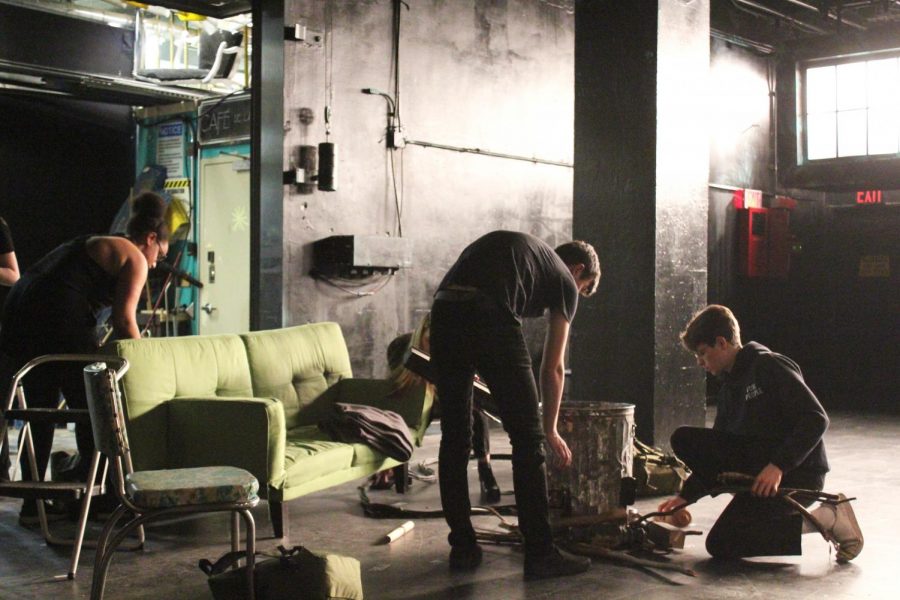 Collaboration was central to blocking, costuming, and set design in Mr. Burns.

“In ‘Mr. Burns,’ storytelling and theatre are critical to survival,” Elizabeth Margid, the head of Fordham’s directing program, writes in her director’s note. “But what speaks most to me is that at its heart it’s a valentine to the theatre — to the theatre’s ability to provide a space for communal feeling and reflection, and its power to bind us together in dark times.”

“Mr. Burns” is this year’s fourth and final Fordham mainstage production, written by American playwright Anne Washburn and directed by Margid. The play, like the production process itself, focuses on community and collaboration.

Although the program did not keep to a specific theme this year when choosing its pieces, they did manage to achieve a throughline. All of the plays this mainstage season have female playwrights and directors and illustrate how all of our actions have consequences.

“We’ve been getting a little looser on the themes and kind of going more for plays that are exciting to the student body and the faculty and then sort of finding what the connective tissue could be,” Margid said.

This three-act play begins shortly after an unspecified apocalyptic event, where a group of survivors come together and act out scenes from the television show, “The Simpsons.” The second act takes place seven years later, and the third 75 years later.

The play changes stylistically from one act to the other: the first more naturalistic, the second more sitcom and the third a “full blown” musical.

“I’ve never directed a piece which had that much difference between the acts,” Margid said.

As the style of the play changes, so do the costumes. Margid collaborated with the costume designers and one of their larger conversations was imagining what materials and resources people 75 years from now would have in their possession.

Margid and her team thought that plastic would most likely survive an apocalypse, so most of the materials the designers used for the play are plastic-based. Many of the costumes are made out of plastic bags that the designers ironed into fabric and wigs are made out of plastic bottles. To gather the necessary materials, the cast held a recycling drive.

Although the play typically requires seven actors, Margid chose to instead cast 14 so that more students could participate in the production. This doubling of the cast required a longer audition process, which made her grateful that she, unlike most guest directors Fordham hires, knew most of the students upon holding the audition.

“I think the fact that I knew all the students really well meant that I was able to cast them based on not just looking at what they do in two minutes in a room, but knowing their whole body of work,” Margid said.

“Mr. Burns” is a chance, Margid said, for her to challenge her students and help them grow creatively — her decision to bring on such a large cast allowed her to maximize this collaborative opportunity.

Margid’s focus on collaboration translates to her relationship with Emily McArdle, Fordham College at Lincoln Center ’21, her student and assistant director. Margid gives McArdle “an incredible amount of free reign” in offering direction throughout the rehearsal process. This is an uncommon opportunity for assistant directors that work with guest artists.

“Again, that’s where I have two hats on as an educator,” Margid said. “[McArdle’s] my student and I’m trying to help her use this experience to work and even encourage the actors to get involved.”

Although many blocking moments happen on the spot, Margid diligently plans out her scenes before attending rehearsal. At home, she explores how scenes will work and then comes in with a rough plan on paper. She has multiple printouts of the stage with rough notes of where people, props and sets move around the space.

Margid has also prepared for the large scale of the show by similarly doubling leadership positions. For instance, her choreographer also helps with directing. For the musical third act, she has a music director. She also cast her actors so that multiple rehearsals could logistically happen at the same time.

“There’s an army of directors on this project,” Margid said. “We’ve had to be very tight in our vision and very tight in our communication because when you have that many people in a leadership position, you need to make sure you’re not confusing [or] giving people contrary instructions.”

“I’m a very collaborative director. I like to really use the people I work with and I enfranchise them to collaborate which is the theme of our whole theatre program,” she added. “So I think this is also a great opportunity to model for a company how far collaboration can go.”