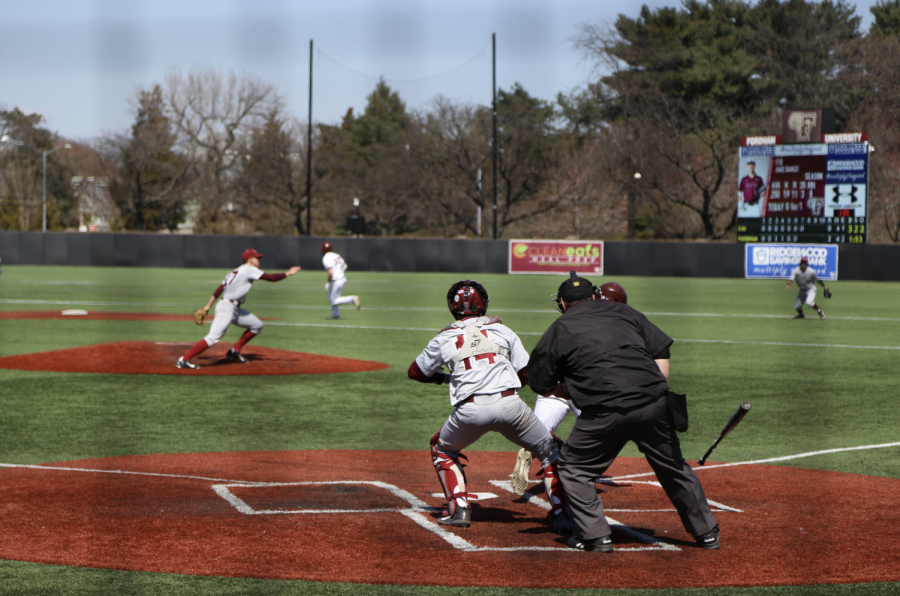 After losing two of three games to the University of Rhode Island (URI), Fordham’s series against St. Joseph’s University this past weekend had added significance. A sixth-inning defensive collapse in their second game and a 12th inning URI walk off in the third completely undermined their two best offensive performances of that weekend. With a losing streak looming, a return to their winning ways was necessary.

To begin the series on Saturday, a mere four hits may have put fans on edge, but were timely enough to drive in one run in the third inning followed by another in the fourth.

With a two-run cushion for most of the game, much was needed from Fordham’s pitching staff. In this high-pressure scenario, starter Matt Mikulski, Fordham College at Rose Hill (FCRH) ’21, delivered one of the most impressive performances of the season thus far.

Despite walking four batters, Mikulski only allowed four hits and no runs in an eight-inning performance. Closer Kyle Martin, FCRH ’20, escaped a two-hit ninth inning without any runs to secure the save, completing a combined shutout of the Hawks in a 2–0 victory.

In their second game on Saturday, Fordham had yet another strange offensive outing. Despite recording nine hits, Fordham also stranded nine runners on base, indicating a productive offense that struggled to cash in on big opportunities. However, just as a long stretch of bad luck proved disastrous in the previous weekend, a stroke of good luck proved to be the Rams’ savior.

Down 2–1, Fordham began the bottom of the sixth inning strong with two singles. With men on first and second base, Jake Baker, FCRH ’20, laid down a bunt back to the pitcher, whose throw whizzed past the first baseman and into the outfield. Both players on base scored on the error to give Fordham the lead.

Two batters later, Baker himself scored from third on another throwing error, this time from the St. Joe’s shortstop, to give Fordham a 4–2 lead. The Hawks were unable to muster a comeback, with  Martin once again closing out the ninth to record his sixth save of the season and a 4–3 Fordham win. In that high pressure situation, Martin reflected that those “situations are where I thrive as a pitcher. That extra bit of adrenaline is a game changer and I’ve always been able to keep that extra adrenaline under control and use it to my advantage.”

After a weekend against Rhode Island that saw the Rams’ efforts go largely unrewarded, they had now won two close games against St. Joe’s, thanks in part to their elite pitching and sloppy defensive play from the Hawks. In their third game, Fordham’s offense finally awoke, if only for one spectacular inning.

Two hits in the first four innings was a superficially dismal start, but a solo home run by Nick Labella, FCRH ’21, in the bottom of the second gave Fordham a one-run lead. A fifth-inning single by Justin Bardwell, FCRH ’19, drove in Fordham’s second run, and a sacrifice fly from Labella drove in the runner from third. A walk put runners on first and second base, setting the scene for second baseman C.J. Vazquez, FCRH ’21.

After a lengthy at-bat that eventually led to a 3–2 count, Vazquez was faced with a situation similar to the ones six-year-olds create in their backyards: a full count with men on first and second with two outs. Fulfilling all of those six-year-olds’ dreams, Vazquez crushed a ball into the left-center field stands to give Fordham a 6–0 lead.

Following the Rams’ five-run fifth inning, Anthony DiMeglio, FCRH ’19, saw that no more would be needed. DiMeglio allowed only three hits, one walk and 10 strikeouts in an eight-inning shutout performance that would earn him consideration as Atlantic 10 Co-Pitcher of the Week. For yet another weekend, Fordham pitchers dominated their Atlantic 10 rivals, allowing only three runs in three games.

On the pitching staff’s recent success, Martin said that “The goal of our pitchers day in and day out is to give our team a chance to win every time we step on the hill.” The team reportedly has a mindset to take their season one game at a time, and to go “1–0 today.” After a rocky weekend against URI, the Rams rallied to take three straight games from St. Joe’s, readjusting their course for the season to come.