The Class of 2019 prepares to leave Fordham behind and enter the professional world. 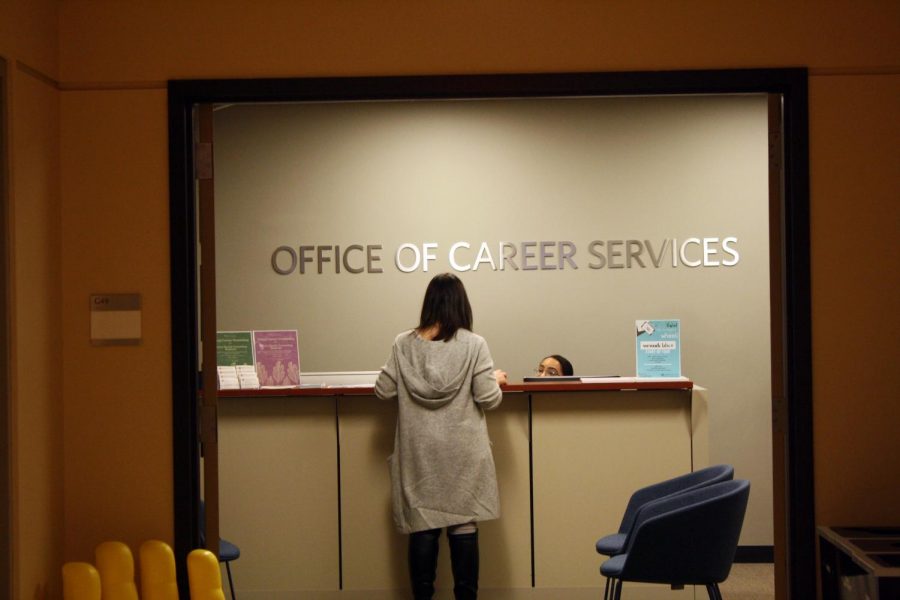 With the academic year coming to a close, seniors are thinking about their futures post-graduation.

There are times, especially at an urban campus like Fordham Lincoln Center, when it is easy to feel as though you are falling behind in work experience, networking or resume building. Landing a glamorous internship can feel like a necessary prerequisite to finding later success in the job market.

Many of these fears are only heightened for members of the Class of ’19 as the university commencement date of May 18 draws ever closer.

Kayla Lauricella, assistant director of Career Services, stressed that students should avoid comparing themselves to peers when it comes to career prospects post-graduation, however. “You’re not behind at all if you don’t have something lined up,” she said, “no matter what” you hear from your classmates.

Lauricella mentioned it’s not uncommon for seniors who are perhaps feeling overwhelmed about entering the professional world to come to Career Services for the first time during these final weeks of the semester. (She admitted that they would ideally come much earlier in their college careers.)

“Often what happens,” Lauricella said, “is a student comes in and is, like, ‘I have no idea what I want to do and I’m graduating in May. What do I do?’”

One recommendation Annette McLaughlin, director of Career Services, typically makes is to not neglect classroom experience. “A lot of time,” she said, “students have no idea that things that they’ve done in the classroom or projects they’ve worked on or papers they’ve done are relevant to the job search.”

“You’re doing a lot of leadership,” McLaughlin said of students’ time at Fordham. “It’s in these one-on-one conversations that we really are able to help you understand the value of what you’ve learned that you just take for granted.”

Although graduation can be a “really overwhelming process,” Lauricella said, some students, such as Nevin Kelly-Fair, Fordham College at Lincoln Center (FCLC) ’19, feel they are well-prepared to enter the professional world.

Kelly-Fair studies film and interned with director Darren Aronofsky last semester, where he worked as a liaison between the development team and clients, reviewed scripts and helped with production coverage.

“Pretty much everyone who works at Darren’s company has worked their way into the industry in some way, shape or form,” Kelly-Fair said, “so they understand the need to network, and that really is the biggest thing.”

While Kelly-Fair is hopeful that his experience will help him secure a full-time position after graduation, he said this past year has still been a stressful one. Last fall, he was attending classes three days a week, interning for two and working on his own projects during the weekends. In the evenings he worked odd jobs like running deliveries or walking dogs to help make rent.

He is confident, though, that he will be able to land on his feet after leaving Fordham. “I know that I can make a living in the city,” he said. “I’m like, ‘You know what? I’m going to make my living and I want to keep making things so I’m going to make that happen.’”

Rachele Perla, FCLC ’19, similarly faced the prospect of graduating head on. “It’s terrifying, absolutely terrifying,” she said, “but I think everyone’s kind of in the same boat so it’s not that bad — we’re all freaking out.”

Perla, a member of the Ailey/Fordham B.F.A. program, has been auditioning across the city all semester. “It’s like in the movies,” she said. “You get into a room and you’re one of 1,000 people in the room, and they’re like, ‘Oh, let’s pick that one person for this job,’ and there’s not that many of them.”

“Right now, I’m planning on working with a company that I’ve been working with for the past two years,” Perla said. “We have performances every two months, and so we rehearse during the week and take class, train and then prepare for those performances.”

Her schedule permitting, Perla also hopes to continue taking classes with the Fordham Graduate School of Education. She is enrolled in a five-year master’s program to obtain her teaching certification in childhood and special education.

For McLaughlin, graduation is “like when you showed up as a freshman and you had to write your first paper. You got through it,” she said. “Think about how you’ve already gotten through four years of a Fordham curriculum, which is rigorous. You’re going to get a job.”