NYC Emo Pioneers Return to the Stage in Brooklyn 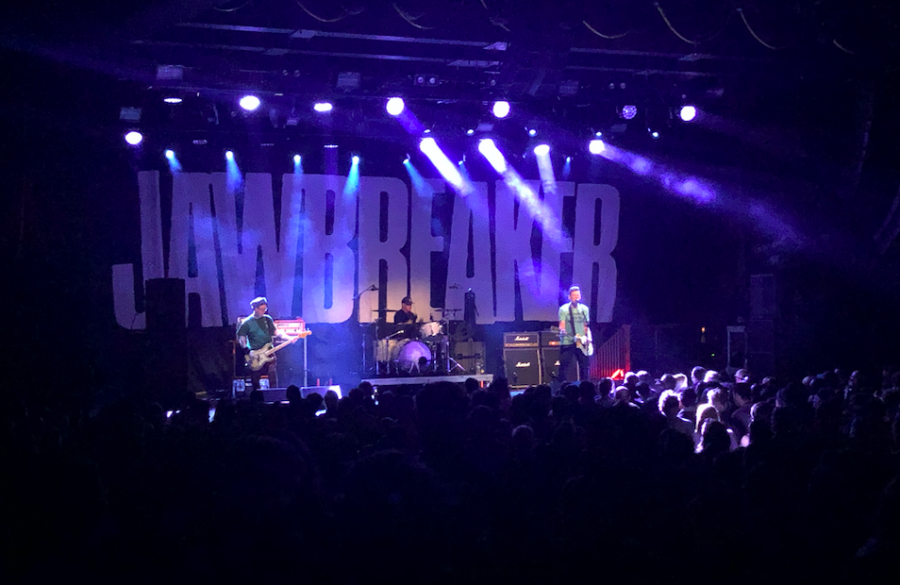 What is punk? Jawbreaker’s concert at Brooklyn Steel proved to the New York crowd that punk is doing whatever the hell you love no matter what stands in your way … even a two-decade hiatus.

The year was 1995. Blake Schwarzenbach was playing guitar and singing for up-and-coming punk band Jawbreaker, which had just signed to a major label, at a show at Irving Plaza in Manhattan — its largest city gig yet. Suddenly, a rowdy fan jumped onstage and began moshing with Schwarzenbach. Blood was spilled.

Such was NYC punk at the time. But Jawbreaker was taking that punk movement and transforming it into something new: emo (although few people knew then just how influential the music would become).

That was the last time Jawbreaker took the stage in its beloved hometown for the next 23 years, seeing as the band broke up the following year. But after its 2017 reunion, Jawbreaker did a three-show run in 2018 at Brooklyn Steel, a relatively new venue in Greenpoint, selling it out each night. In many respects, it was not the first time the band dove headfirst into uncharted territory.

Now, in 2019, the punks have returned to that very same space for multiple nights, selling it out once again. It’s doubtful that anyone hearing emo in the ’90s could have predicted such a phenomenon.

Schwarzenbach, the principal songwriter for the band, opened the March 24 show with the punchy guitar chords of “West Bay Invitational” from their 1994 LP, “24 Hour Revenge Therapy.” That record, like many others in the emo genre, is characterized by emotional lyrics sung to punk and hardcore music. Appropriately, the concert’s opening number is a love letter to the punk scene in Oakland, Calif.

“We kissed a shot of Kentucky straight,” Schwarzenbach sang about a punk party in Oakland. “I swore this life is worth the wait.” The audience was not rowdy as it was at Irving that night in ’95; it was more pensive, basking in appreciation of the band’s genius in retrospect. The emotionality — the nostalgia — flowed through the room.

Seamlessly, the trio transitioned into “Want,” a cult favorite from Jawbreaker’s 1990 debut, “Unfun.” Noticeably, the guitar became much louder, as Schwarzenbach seemed to have several guitar pedals that corresponded to each of the band’s albums (plus a clean tone for softer moments during the songs). The attention to detail in the musicianship was apparent. The crowd ate it up, cheering loudly and dancing along to the fast-paced beat of the song.

Drummer Adam Pfahler, owner of Bay Area-based Blackball Records, was on point all night. Each hit was perfectly on time, each fill ever so tasteful and each beat exactly as it sounded on the record. Bringing studio sounds to the stage is hard work, but Pfahler made it seem effortless.

Chris Bauermeister, meanwhile, played with a bass tone so chunky Bruno Mars would be jealous. The sound of his plectrum plucking the lower register of his instrument, when mixed with his high-midrange tone, made for a powerful and in-your-face presence that was unmistakably Jawbreaker.

The punks played tracks from their entire discography, performing songs from all four official full-length releases. They even included two songs from their B-side compilation “Etc.” Fans jumped in surprise at some songs’ inclusions, including “In Sadding Around:” The ’94 track was first performed at the legendary 924 Gilman St. Project in Berkeley, Calif., and had only been performed eight times since the reunion.

The grand finale was the mega-hit “Boxcar,” an absurdly self-aware track as it is a punk song that criticizes the punk scene. When fans accused Jawbreaker of not being “punk enough” in the ’90s, the band responded with a song that rhetorically asked: “One, two, three, four/Who’s punk? What’s the score?” As music elitism and snobbery runs rampant, the lyrics still ring true today — which would explain why the whole crowd belted the words at the top of its lungs.

On that note, Schwarzenbach and crew left us with a question: What is punk? Historically, it has been a number of things: rebellion, anti-establishmentism, disenfranchisement and whatever makes people break the status quo. More than anything, though, Jawbreaker’s concert at Brooklyn Steel proved to the New York crowd that punk is doing whatever the hell you love no matter what stands in your way … even a two-decade hiatus.