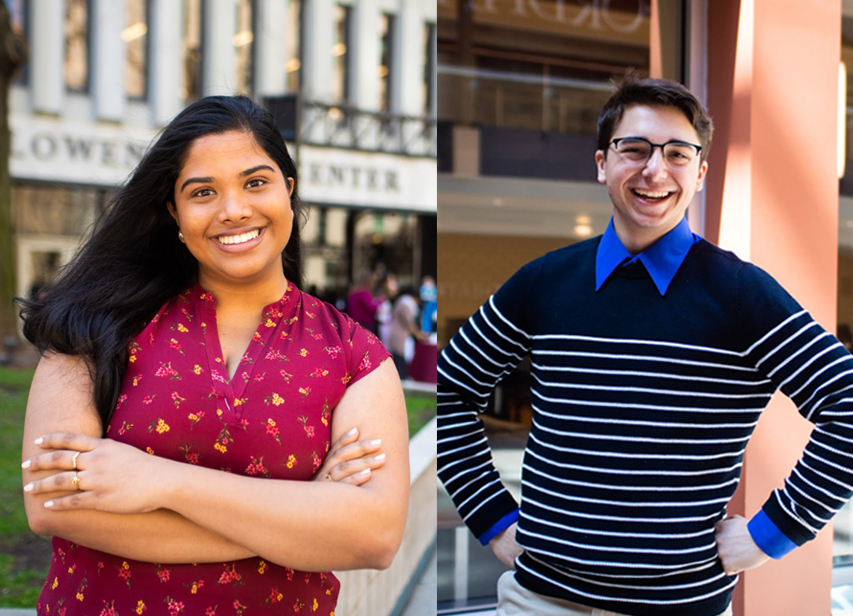 Tina Thermadam, FCLC '20, will be USG's next president. Robert Stryczek, GSB '21, will be the next vice president.

Robert Stryczek, GSB ’21, was elected as vice president, marking a victory for two insider candidates who were met with criticism from opponents who questioned their responsibility. Stryczek defeated Ellen Song, FCLC ’21, who ran on a seemingly identical platform as Tong to dismantle USG and build it from the ground up.

Thermadam campaigned on refining USG instead of revolutionizing it. Her promise to improve the “status quo” appeared to voters as a much more measured approach than her opponent’s.

Thermadam prioritized increasing club retention through what she repeatedly referred to as “streamlined communication” between USG and club leaders. She ran on improving interfaith resources, loosening guest policies for residents and commuters, and keeping Fordham Fridays, a weekly event promoting school apparel and free pizza.

At the vice presidential debate, Stryczek stressed his commitment to assisting the president and making the Fordham Lincoln Center community an enjoyable one.

Among the other elected positions are Brielle Intorcia, FCLC ’20, who has been elected secretary; Loreen Ruiz, FCLC ’21, who has been elected chair of student affairs; and Joseph Moyer, FCLC ’22, who will serve as treasurer. Class senators include Sophomore Senator Joseph VanGostein, GSB ’22, Junior Senator Kirsten Murphy, FCLC ’21, and Senior Senator Anastasia Gomez, FCLC ’20.

In an unprecedented move, Thermadam sent out mass emails to students throughout the Fordham Lincoln Center community, a tactic that helped inform large numbers of potential voters about her platform. Tong utilized his Instagram page, which has over 10,000 followers, to post campaign messages.

Song and Tong both remain in high spirits despite their defeats in the election. Song congratulated the winners on their victories, saying that she is “looking forward” to seeing their contributions to Fordham and wishes them good luck. Tong, meanwhile, is confident that USG will continue to thrive under the guidance of Thermadam and Stryczek. “Tina and Robert are tremendous people and will serve the organization well,” he said. “I wish them the best of luck and I am happy for them.

“More time to make money for me,” Tong added.

As for Stryczek, he said that “Ellen ran a great campaign and I hope that she will still be in USG next year.” He also expressed excitement and hopefulness at “filling Katina Smith’s shoes,” saying, “I have a bunch in store for adding to Fordham’s spirit and I can’t wait for everyone to see it next year.”

This article will be updated.