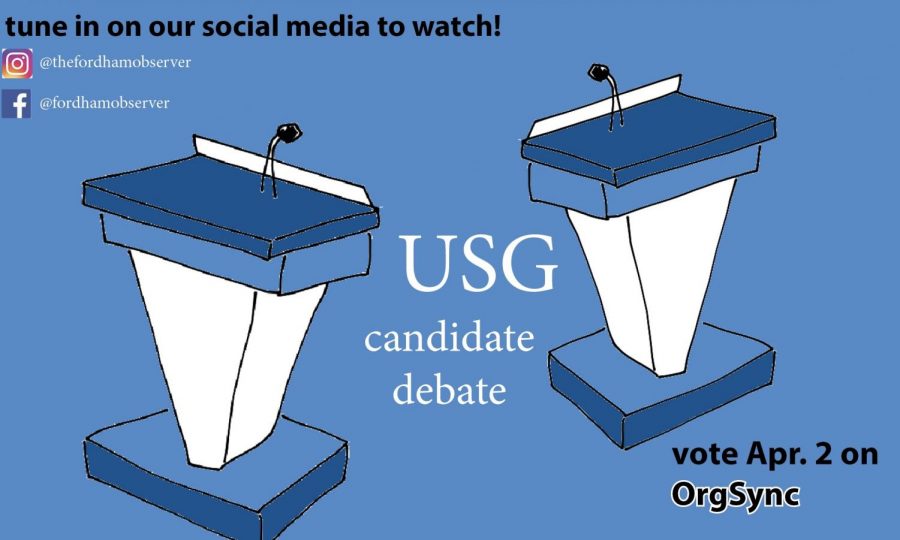 By ESMÉ BLEECKER-ADAMS and SAMI UMANI

With the United Student Government (USG) elections set for April 2, the four candidates for president and vice president took center stage to a classroom filled with 50-some students on the afternoon of March 29. The two presidential and two vice presidential contenders fielded nearly two hours of questions from The Observer’s moderators, Sophie Partridge-Hicks and Gabe Samandi, and students in the audience.

As the moderators pressed the candidates on their platforms, Tong and Thermadam focused their responses on the organization of clubs at Fordham and student involvement on campus. The candidates also clashed over the structure of USG itself and their vision for the university.

The candidates also butted heads over the financing of club budgets. Tong stumped on his call for clubs’ financial independence, touting a model of event fundraising that would constitute a large portion of student organizations’ funds.  Later during the audience Q&A session, an audience member asked Tong if his strategy “privileges students of a certain background.” He responded, “I don’t know where the privilege came from,” adding that “a lot of the clubs, they do already. You set up tables, you sell cookies.” If not cookies, Tong said, clubs could ask for donations.

Thermadam, meanwhile, stressed the need for communication throughout the current funding process, but said that she doesn’t see why clubs should need to secure their funding outside of what the Student Activities Budget Committee provides. Clubs should not have to fundraise to support themselves, she said.

Theremadam and Tong both expressed support for installing dispensers for feminine hygiene products on campus. Thermadam noted discussion has already begun for their implementation. Tong parried student concerns that he intends “to decrease democracy on campus” by restructuring USG, saying that he is concerned with efficiency and influence rather than power. He said that “senators have zero power” in USG currently,  which Thermadam disputed, and that he wants to give more legislative authority to elected representatives.

After the presidential candidates took their seats, the vice presidential debate between Ellen Song, FCLC ‘21, and Robert Stryczek, GSB ’21, began. Both candidates cited the necessity of increasing student involvement and participation. Song expressed a desire for more academic clubs, saying she sought a place for math majors like herself. Stryczek pointed out that Lincoln Center does already has a math club. He advocated more community-building events organized at convenient hours to attract commuters.

Stryczek said he sees the vice president as the “soul” of USG, a combination of assisting the president and making Fordham enjoyable. Song said the role is defined by an ability to think creatively and find new ways to approach problems.

When the moderators opened up the Q&A to the audience, the first student in line questioned Tong’s reliability in wake of his resignation from USG in fall 2018. As vice president of Operations, Tong failed to complete his leadership training, which triggered a temporary freeze on USG’s budget. Tong dismissed the question, saying he didn’t expect the student would be voting for him either way, garnering a wave of chuckles from the audience. Tong shot back, pointing to his record of advocacy for students. “I’m the only person, probably in this room, to sacrifice my own grade and reputation to stand up for them,” he said.

A video of the full debate can be found online on The Observer’s Facebook page.

After the debate, Stryczek told The Observer that his next step between now and election day is “making sure that everybody who wants to vote and actually cares about everything knows how to and when to vote.”