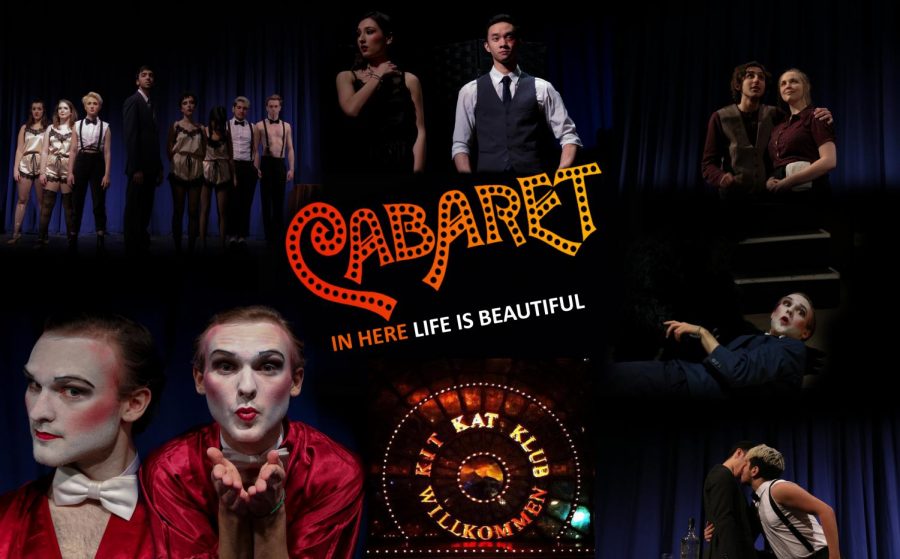 On Friday, March 8, Fordham Lincoln Center’s musical theater club, Splinter Group, said “Willkommen” to a packed audience for their production of “Cabaret.” This marked a milestone for the performance group, as it was the first time they put on two shows in one school year.

Co-director and Splinter Group President Sophia Oliveri-Meyer, Fordham College at Lincoln Center (FCLC) ’20, explained, “We just wanted to do more shows because there aren’t as many opportunities for musical theater at Fordham.” Judging by the long lines of people anxious to be let in, it seemed that the Fordham community wanted more shows as well.

“Cabaret” takes place in 1930s Berlin, following Clifford Bradshaw, a young American writer who seeks inspiration in the scandalous thrills of the city. While exploring the sordid Kit Kat Klub, he meets Sally Bowles, a vivacious, gin-drinking cabaret performer with a bold personality. The two delve into a daring romance that quickly turns serious when Sally becomes pregnant in the midst of the Nazis’ political uprising. Throughout it all, the omniscient, mysterious Emcee walks the audience through the show’s themes of love, hate, sex, anti-Semitism and politics.

Since winning the 1967 Tony Award for Best Musical, the acclaimed show has lived on through three Broadway revivals, an Academy Award-winning movie and countless regional productions around the globe.

Opening the show as the Emcee was shining Splinter Group newcomer Orlando Whitcomb-Worden, FCLC ’22. When asked about the experience, he praised the show’s co-directors, Oliveri-Meyer and Jonathan “J.J.” Jackson, FCLC ’20. “They had some great ideas about the Emcee being kind of like the god in the world; he manifests in all these different people. He’s not necessarily being the Emcee when he does them, but he’s the face of all the people — the oppressed and the oppressors,” Whitcomb-Worden said.

Peri Rohl, FCLC ’20, and Jon Uy, FCLC ’19, starred as Sally Bowles and Clifford Bradshaw, respectively; each gave a commanding, genuine performance in their leading role. Annalee Tomanelli, FCLC ’20, (Fraulein Schneider) and Pedro Gonzalez, FCLC ’22, (Ernst Ludwig) portrayed their characters with both comedy and heart. The ensemble of Kit Kat girls stood out with their strong voices, impressive choreography and seductive attitudes. The energy and passion present in the show certainly reflected the hard work of the entire cast, crew and creative team.

Beneath all the flash, “Cabaret” explored dark subjects like anti-Semitism, violence and poverty; these topics are still painfully relevant in modern society. By the second act, the audience grew aware of the somber undertones of the piece; many moments cued audible gasps and shocked silence.

Oliveri-Meyer noted the show’s relevance and how musical director Katie Dolan, Fordham College at Rose Hill ’18, referenced current political topics. “The very end of act one, the way we crafted it, that’s when the hate really starts shining in the show,” Oliveri-Meyer said. “That’s the moment when someone decides to start building a wall. That wasn’t necessarily part of the decision-making on what show we would do, but it worked out that way.”

By exploring darker shows s as “Cabaret,” Splinter Group is proving its ability as a truly artistic ensemble. This is integral to Oliveri-Meyer. She acknowledged, “Splinter got kind of the reputation of [being] a joke when we did ‘High School Musical.’ However, it was the biggest crowd.”

Now, Splinter is beginning to “bridge the gap” with the theater program. “Cabaret” included the most theater majors ever in a Splinter show. “We’ve gotten actors in the theater program coming to us to have an outlet for musical theater. And slowly but surely, we’re trying to make it more legitimate, to make art, real art.

“I’ve heard tour guides talk about Splinter, so this club carries a lot of weight in this school. I love it.”