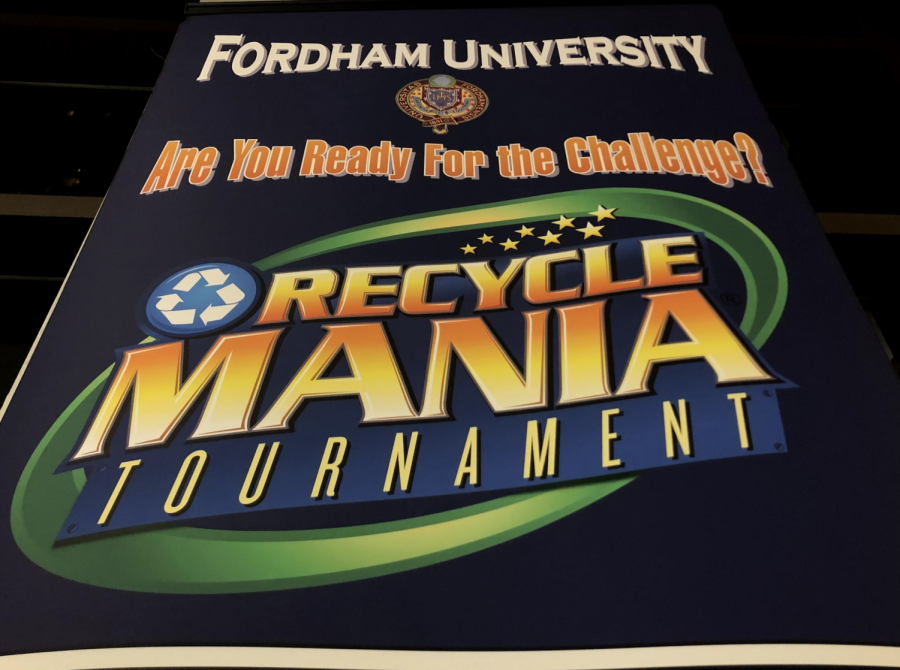 This may be the last thing Owen Roche ever saw.

The tall, shadowy banners leer at the entrances of both Lincoln Center residence halls, clad in 2002 Word Art and strange, blurry image macros. Like gargoyles — or rejected Hogwarts house paintings — they keep silent watch over the comings and goings of Fordham students who seldom take notice.

Have you felt it? Have their whispers of sustainability pierced your consciousness?

Does the phrase “Oh say can you recycle” ring a bell?

The perceptive among us have sensed their overnight arrival. With no announcement, no fanfare and nary an email of explanation, the old, tall flags have appeared once more.

If the rune-covered, navy blue flags emblazoned with that catchy name haven’t given you enough information, let this be your enlightening: RecycleMania is sweeping across Lincoln Center and Rose Hill — and it threatens to melt the very plastic of the university.

The RecycleMania movement began in 2001 when Ohio University and Miami University held a friendly competition to see who could recycle more material. Gaining traction ever since, the program now partners with the National Wildlife Federation and the Keep America Beautiful campaign, a group known almost entirely that one commercial from the ’70s with the crying Native American — and of course for pioneering of “corporate greenwash,” a way for big companies to treat the symptoms of pollution and feel good without ever touching the root cause (which, more often than not, they are).

Fordham began its participation in the Great Recycling Ruse in 2002, according to RecycleMania archives. To the casual observer, our residence halls have been helping the planet and building community for 17 renewable, renewable years.

I consulted Fordham News, the propaganda arm of the university, and a revelation stopped me in my tracks. I searched for a record of any residence hall’s past performance in RecycleMania, of any scrap of news lauding Fordham’s commitment to sustainability.

Nothing since 2013. Eleven years of alleged recycling, and then nothing.

Nothing but the annual appearance of those blasted banners to remind students of clipart past. The outdated information doesn’t even mention McKeon Hall as a participating residence hall, casting doubt not only on the shadowy movement but the existence of McKeon Hall itself.

RecycleMania and its baseless statistics threaten to reveal a truth the banners know well, but it is a revelation we’ve never suspected: Recycling. Isn’t. Real.

How could we have been so foolish? Nestle knows it. The cigarette companies that partnered with Keep America Beautiful to organize litter campaigns instead of smoke-free zone initiatives — they know it.

The alien lizard people running the National Wildlife Federation who subsist exclusively on plastic grocery bags know it all too well. Recycling initiatives divert our focus from the real, root causes of our ecological problems. Namely, our acute lack of landfills. It’s an embarrassment — New York is our campus, and it certainly wasn’t built by turning waste into anything useful.

It’s time we dispose of this myth for good. Don’t recycle. It’s un-American, it puts hardworking bottle factory workers out of jobs and it’s contrary to every Jesuit value for which this university purports to stand.

My research into exposing RecycleMania for the sham it truly is has not left me unscathed. I try to shield my thoughts from the banner when I pass by, but I fear my true intentions are already known to the Recyclemasters.

Two days ago, returning from a night class, I discovered a single, empty plastic Dasani bottle on my bed. My garbage can was completely empty, a pizza box I had thrown in there without a care perched menacingly on top.

The next night, my recycling bin was full of plastic monogrammed Fordham cups.

EDITOR’S NOTE: For disloyalty to the Blue Bin and seditious speech, Owen Roche was transferred to the Bronx Recycling Center and will undergo treatment to suppress his g*rbage thoughts. In lieu of donations, he requests you dutifully present your papers and plastics to the nearest receptacle and wishes you a happy and healthy RecycleMania season.