New Zealand: We All Must Join the Fight Against Islamophobia 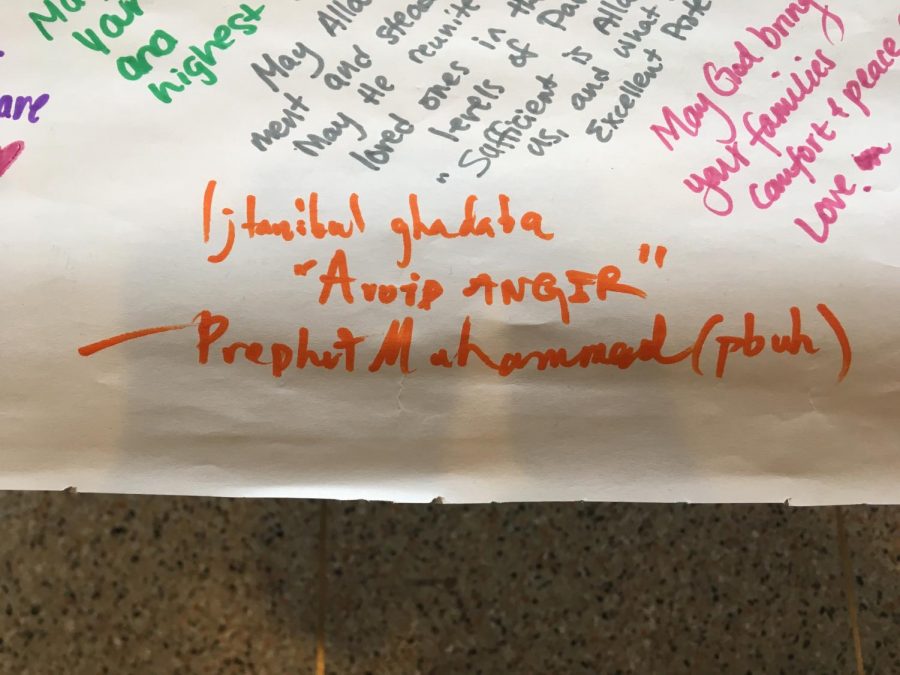 A poster was provided afterwards on which students could write messages of their solidarity against the terror that befell New Zealand. One student wrote a hadith in Arabic, a saying of the Prophet Muhammed: “Ijtanibul ghadaba,” or "Avoid anger."

By EVAN VOLLBRECHT and GRACE GETMAN

Within this seemingly unending cycle of terrorist attacks, it is easy to become numb, to see casualties as no more than numbers, tragedies as nothing more than beats of sadness in a long string of suffering.

But sometimes they reach through the headlines and punch you in the gut.

The New Zealand mosque shootings did that. A self-proclaimed white nationalist drove to two mosques in Christchurch, New Zealand, killed 50 people and injured at least 20 others during Friday worship services.

While this act of terror occurred in New Zealand, we are all too familiar with acts of senseless hatred and mass killing in the United States. Around the country, we have been standing in solidarity and grief with the rest of the world.

Jason Morris, chair of the Department of Natural Sciences, spoke at the vigil held at the Lincoln Center Plaza on the day following the attack. He said, “I’m angry at this terrible expression of evil and hatred that is directed at all of us, at our feelings of security and of belonging, at our sense of community and at our belief in basic belief human decency.” The mood at the vigil was somber and silent, students craning to hear the speakers’ words through the cacophony of New York traffic, each speech resonating them during an extremely difficult time.

We thank Fordham University for its sensitive and inclusive approach to the vigil. The voices of Muslim students were supported by Jewish speakers who stood in solidarity, with Conor O’Kane of Campus Ministry providing only opening and closing remarks.

A poster was provided afterward on which students could write messages of their solidarity against the terror that befell New Zealand. Each expressed shock, grief, and called for peace and justice, but one student summed up the feeling of the FCLC student body well. They wrote a hadith in Arabic, a saying of the Prophet Muhammed: “Ijtanibul ghadaba.”

Each speaker voiced their grief at the senseless loss of life in New Zealand and issued a call to action for the entire Fordham community to join them in combating Islamophobia and white supremacy, “today and every day,” as Morris, one of the Jewish speakers, said.

While we stand together and hope for peace, we recognize that our solidarity and our prayers are not ends in themselves, but meant rather to steel us as we continue to defend harmony against the forces of hatred and chaos.

The 49 victims of the Christchurch attack were killed as they prayed for peace, and we must honor them by upholding those ideals, through word and action, in all areas of life.

One of the best ways to pray for peace is with your feet.

As a part of actively resisting Islamophobia, people who are not Muslim must prioritize the voices of Muslims, as they are the ones who feel tragedies like this the most viscerally.

It’s time to say something when we encounter Islamophobia. If that one uncle of yours or even a friend says something problematic, instead of awkwardly smiling through gritted teeth, you need to say something.

It may be hard to confront people you may genuinely like for Islamophobia, but it can be done. Experts recommend that instead of immediately labeling the comment offensive or leveling accusations — which could lead to a pointless and drawn-out fight — the best thing to do is to explain your reaction to the comment and ask what the person was trying to say. A question like “Why did you just say that?” can go a long way to starting a potentially crucial dialogue. Even if you fail to engage them in constructive conversation, it’s still important to signal to those who exhibit Islamophobic behavior that their harmful beliefs are unproductive and unacceptable.

But it’s not enough to simply drive them off with cutting words and cold shoulders. In exile and exclusion, they only deepen their hatred and turn to each other for reinforcement. Eradicating Islamophobia is harder work than simply denouncing an evil — it must be fully co-opted and defeated.

Most of these actions are on the personal level, but combating Islamophobia must occur on the political stage as well.

Go to the next protest. Donate to groups that fight Islamophobia. And, go to the voting booth and kick out politicians who spout Islamophobic idea and create Islamophobic policies.

Islamophobia left unchecked does irreparable harm to our Muslim brothers and sisters around the world. The only way to wipe out Islamophobia — and respond to terrifying acts such as the New Zealand mosque shootings — is to make concerted efforts to push back against Islamophobia in our personal and political lives.