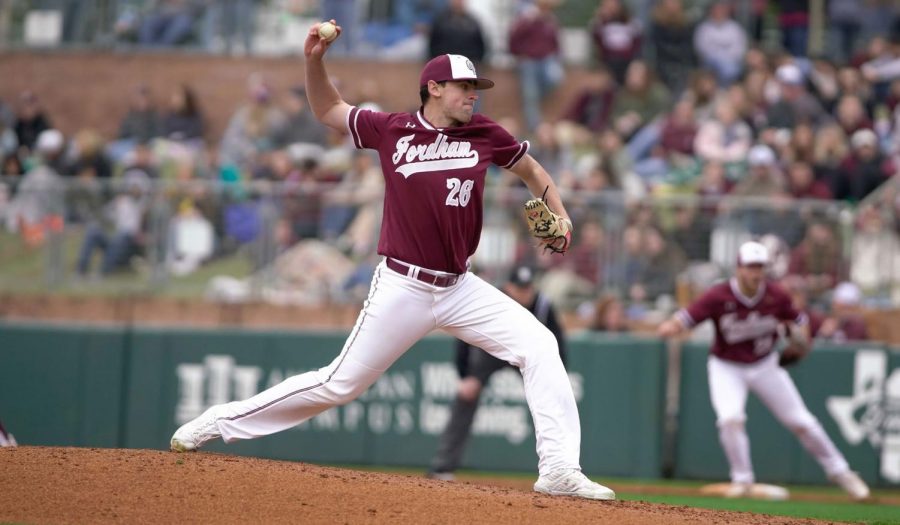 Every year, Fordham Baseball hosts a round robin weekend against two teams. This event serves to prepare the Rams for the coming season and officially show off the team to fans on their home field. This year, from Friday, March 8, to Sunday, March 10, Fordham hosted Iona and Hofstra from, and against these fellow New York competitors, they functioned incredibly well throughout.

In their first game Saturday, Fordham faced Iona University. It was a rematch from their game on Friday, which ended in a 9–2 Fordham victory. Despite losing to Fordham, Iona rallied in their next game to record their first win of the season against Hofstra and looked to continue moving forward by knocking off Fordham.

On Friday, in their first game against Iona, Fordham took an early lead in the first inning and never looked back. They encountered more difficulty Saturday, as the score remained tied through the third inning. Starting pitcher John Stankiewicz, Fordham College at Rose Hill (FCRH) ’21, performed exceptionally well early on and would go on to pitch seven innings, while giving up one run and striking out seven batters.

After three innings of scoreless baseball, Fordham’s offense finally woke up. Justin Bardwell, FCRH ’19, started off the rally with a single, and after Matt Tarabek, FCRH ’20, was hit by a pitch, the Rams found themselves with men in first and second base. A sacrifice bunt advanced both runners into scoring position, and a single by Jake Guercio, FCRH ’22, drove in Fordham’s first two runs of the game. Later in the inning, Alvin Menendez, FCRH ’20, would drive in Guercio, giving Fordham a 3–0 lead.

In the sixth inning, Iona would finally drive in their first run of the game, making the score 3–1. Outside of that small offensive spurt, the game remained relatively unchanged until the eighth inning. With one runner on base, C.J. Vazquez, FCRH ’21, hit a ball that never seemed to land. It cleared the fence and landed in the stands in left field, making the score 5–1. Anthony Zimmerman, FCRH ’19, pitched two shutout innings in the eighth and ninth to give Fordham their sixth victory of the season.

In their second game Saturday, Fordham began their split doubleheader against the Hofstra University Pride. After losing to Iona the day before, Hofstra should have provided Fordham with little opposition. Perhaps they were motivated by the surprising loss, because they provided far more opposition than what was anticipated.

Despite a seven-inning, nine-strikeout performance from Joseph Quintal, FCRH ’21, two solo home runs in the second and fifth from Hofstra put Fordham in a losing situation for the first time that weekend.

Fordham did not go easily and managed to take the lead back in the seventh before losing it again in the top of the eighth as Hofstra tied  the game at three runs.

The bottom of the eighth would be one of two remaining opportunities for Fordham to reclaim the lead a second time, and they took advantage. Bardwell led off the inning with a single, and on a 3–1 count, Tarabek hit a shot down the left field line, scoring pinch runner Jake Baker, FCRH ’20, from first base. Kyle Martin, FCRH ’20, threw a scoreless ninth inning to secure the comeback victory.

The next day, Fordham played Hofstra again to complete the doubleheader, and for the second time, a comeback was necessary.

In the second inning, down 1–0 after an early Fordham run, a Hofstra player hit a 3-run homer to put the Rams into another hole. The game of baseball can sometimes come down to one heroic performance, and shortstop Jake MacKenzie, FCRH ’21, answered the call.

In the third inning, a single by MacKenzie drove in a run, bringing Fordham within striking distance with the score now 3–2. In the fifth, MacKenzie hit a monumentally clutch double with two men on base, scoring one and putting the other on third. A sacrifice fly from Justin Bardwell would score in the man on third, giving Fordham a 4–3 lead that would never be relinquished.

If the round robin weekend demonstrates anything, it is that this team has its fair share of talent. In almost every game, a different player made the difference between victory and defeat. As Fordham comes closer and closer towards conference play, it will be interesting to see if this group of players can continue to combine their efforts as the competition increases in quality.