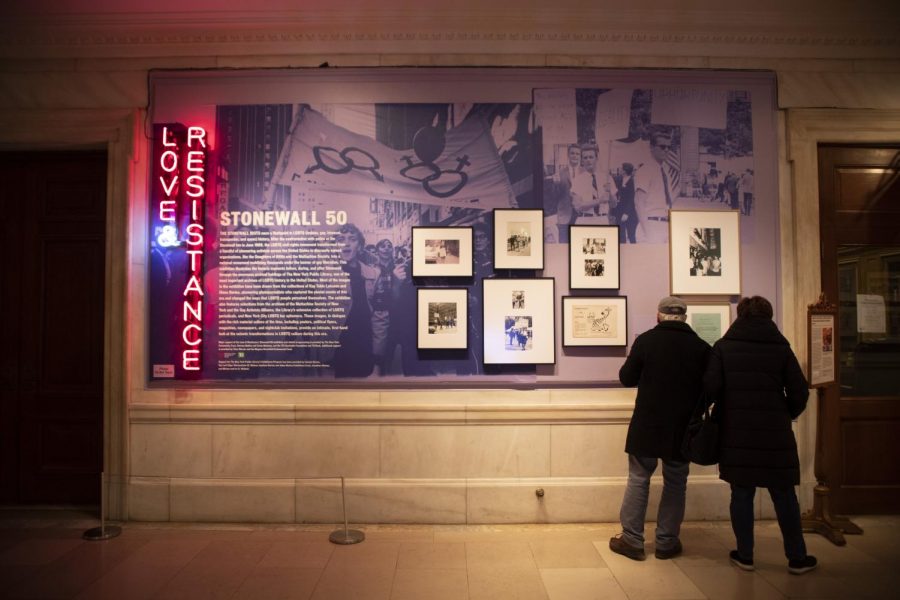 The NYPL's new exhibit focuses on "changing perceptions one kiss at a time."

“Where were you during the Christopher Street Riots?” asks a Mattachine Society poster displayed on the wall of the Stephen A. Schwarzman Building.

Don’t think too hard. They are better known as the 1969 Stonewall riots, when a routine police raid of the Stonewall Inn gay bar sparked an unprecedented week of riots protesting lesbian, gay, bisexual, transgender and queer discrimination. You probably were not born yet when they occurred. But 50 years later, the New York Public Library’s (NYPL) new exhibit “Love and Resistance: Stonewall at 50” invites us to look back on decades of LGBTQ history and consider where we are today.

The exhibit is divided into four sections: “Resistance,” “In Print,” “Bars” and “Love.” They center around stills taken by photojournalists Kay Tobin Lahusen and Diana Davies, who largely documented the events of the Stonewall era. Sprinkled among their work are letters, pamphlets, magazine covers, drawings, invitations and posters that create a vivid portrait of the decade that inspired the form of modern LGBTQ movements.

On the whole, the focus on the Stonewall riots themselves is surprisingly minimal. They are mentioned, of course, in the exhibit’s introductory blurb as the “turning point in LGBTQ political consciousness,” when underground activist groups came to the forefront and began to advocate more openly for gay liberation.

Much of the exhibit, however, focuses on the riots’ aftermath and highlights the specific forms that advocacy took. One of them was bodily expression. According to the introduction to the “Resistance” section, pre-Stonewall protests were calculated and conservative: protesters dressed in suits and “sensible skirts” and kept controversial signage to a minimum.

The photos in the section capture post-Stonewall protests, where crowds were bigger, words were stronger and participants were “emboldened” to dress and speak with less restraint. And these LGBTQ demonstrations were intersectional from the start. They were linked with labor, pro-black, anti-war, feminist and student demonstrations. Look at some of the images on display — of diverse crowds, of seas of handmade signs, of college-age students gathered — and you might discover a striking lack of difference between them and snapshots of modern marches.

Another avenue of advocacy was the press. The “In Print” section is less photo-focused; most of the memorabilia on display here are covers and article excerpts from the numerous LGBTQ periodicals whose circulation exploded after Stonewall. They were the Facebook groups and the online blogs of their day; they were the means by which members of the movement connected with each other and spread ideas, literature and event news.

“Bars” highlights social advocacy. Invitations to dances, advertisements for drag balls and images of LGBTQ people dancing carefreely at nightclubs pepper the walls of this section. Stonewall was originally a mafia-run establishment and one of the many illegal gay bars in the city. After the riots, people pushed for a change in bar culture: namely, that LGBTQ people should legally be served at bars and that there should be alternatives to bars as social spaces for LGBTQ people until that happened. The activist groups spearheaded this sub-movement by organizing dances that catered specifically to the LGBTQ community and created spaces where they could be accepted.

The final and perhaps most potent form of advocacy, as shown in the “Love” section, is mere existence. The photos displayed here, by Lahusen and Davies among other photographers, share the common theme of affection in the LGBTQ community. Many of these photographs look like something you might see framed on the mantle in a living room — photos of families, of friends, of husbands and wives. Some are kissing, some hugging, some simply sitting together, some posing and smiling for the camera.

It’s almost too easy to forget that these photos were taken in a time when homosexuality was seen as a crime, an illness or both. From a contemporary perspective, this is an exhibit of photos. What makes it stand out is remembering that it’s an exhibit of innumerable small resistances that made up a movement whose effects we still experience.

LGBTQ acceptance has made strides since Stonewall, but the history that brought us to this point may not often be considered. That’s what the NYPL and “Stonewall at 50” do well: they emphasize the progress that has been made while making clear the parallels between 1969 and 2019. Fifty years later, the exhibit implies, romance is still revolutionary.

Various branches of the library will host events related to the exhibit throughout its run that can be found on its website. “Stonewall at 50” will be on display through July 14.