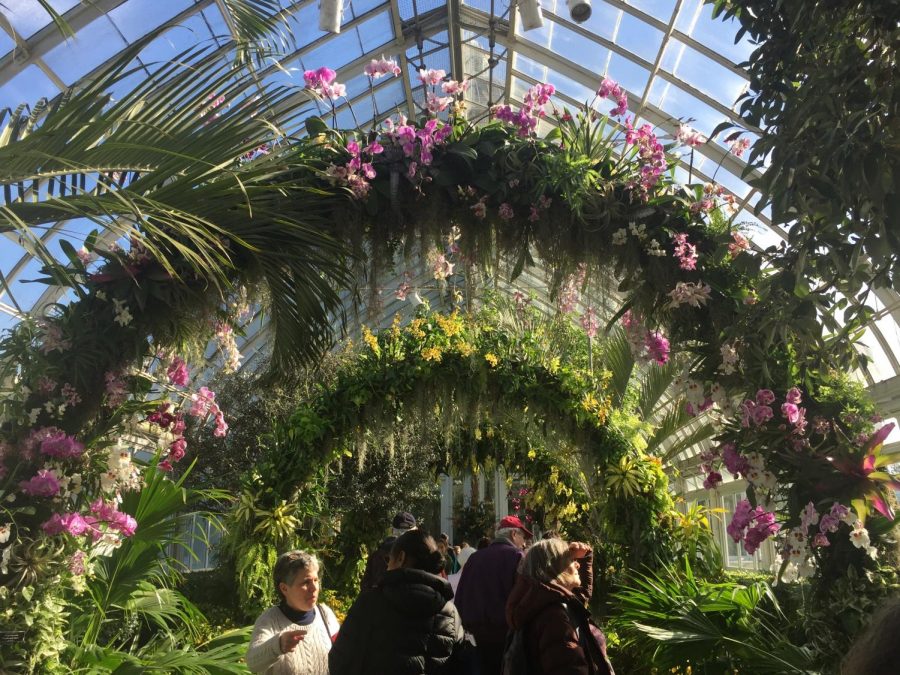 The Orchid Show is hosted in the Enid A. Haupt Conservatory, part of the New York Botanical Garden.

Across the street from the Fordham Rose Hill campus lie the beautiful grounds of the New York Botanical Garden (NYBG). Every year, the NYBG provides a bright spot in the gray of the city with the colorful Orchid Show, on display from Feb. 23 to April 28. The New York Times and The New Yorker have praised past shows, whose themes have ranged from Thailand to the work of floral designer Daniel Ost.

The Orchid Show is located in the Enid A. Haupt Conservatory, a vast greenhouse that contains a lush garden. The Conservatory is adorned with thousands of orchids for the show, including specimens from the NYBG’s vast collection and special Singaporean varieties. One of these orchids from the NYBG collection has been named Vanda Awkwafina, after the New York City-born actress who starred in “Crazy Rich Asians,” set in Singapore.

Visitors can see this flower and many more during the day or at the Orchid Evenings. On select Fridays and Saturdays throughout the duration of the show, visitors 21 and older can visit the show during the evening from 7 to 10 p.m. The Orchid Evenings will include live performances from dancers and DJs, as well as a selection of food from the Bronx Night Market.

The NYBG is also hosting demonstrations about orchid care and tours of the Orchid Show during its run. If visitors want to bring a piece of the beauty of the Orchid Show home with them, many varieties of orchids are for sale in the NYBG gift shop.

The NYBG is open Tuesday to Sunday from 10 a.m. to 6 p.m. While Fordham students, faculty and employees receive one free grounds pass to the gardens with a valid university ID, this does not include access to the Enid A. Haupt Conservatory, where the Orchid Show is located. However, the beauty of the show makes the cost of the ticket worth it. For students, all-grounds passes cost $20 during the week, and $25 on weekends. The Orchid Show is part of the NYBG’s year-long theme of #plantlove. Those who visit the show are encouraged to share their experience, include the #plantlove hashtag in any social media posts and look out for other exhibitions, programs and projects being offered by The New York Botanical Garden this year.