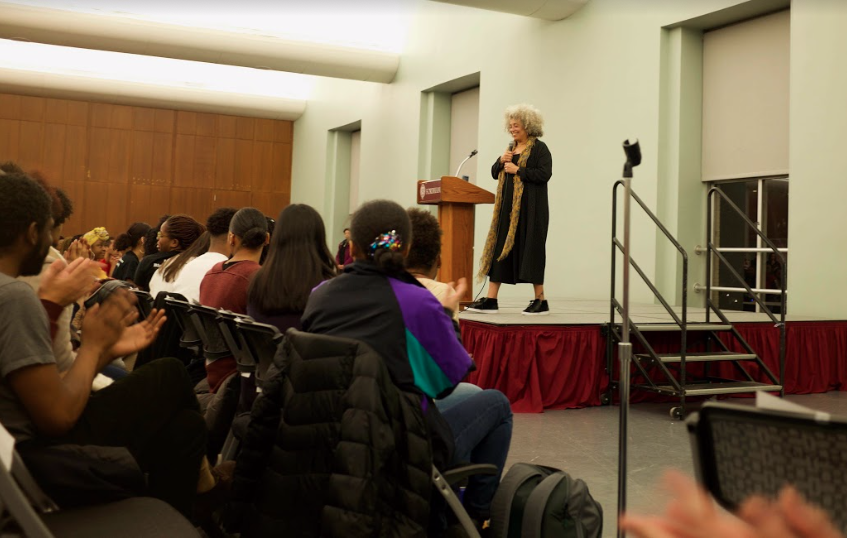 By ALEJANDRA CARRASCO and JEFFREY UMBRELL

That short notice, however, did not affect the event’s turnout — by the time Davis arrived just after 6:30 p.m., students had filled both the seats and the majority of the standing room space near the rear of the ballroom.

Davis entered McGinley to enthusiastic applause and a standing ovation from the audience.

For much of the evening, Davis focused on the connections between the black experience and those of other oppressed peoples. “When we talk about black struggles,” she said, “we should realize that not all participants have been black.”

Davis stressed the intrinsic link between black history and that of indigenous people in the Americas. She recalled her recent visit to the the rural Colombian mining city of La Toma, which has been inhabited by Afro-Latinos for nearly 500 years.

The struggles of both groups, Davis said, “have always been intertwined.”

There are foundational connections between the histories of all past and contemporary oppressed groups for Davis. Much of her recent scholarship, including her newest book, “Freedom is a Constant Struggle: Ferguson, Palestine, and the Foundations of a Movement,” focuses in particular on comparing race relations in the United States to the Israeli-Palestinian conflict.

It seemed that students were anticipating the subject of Palestine to crop up in Davis’s remarks — pro-Palestine Fordham students sat near the front of the ballroom. When she decried the Israeli “occupation” of the region and said that “we’ve learned a great deal from the Palestinian resistance,” she received loud applause from both the pro-Palestinian students and the general audience.

Members of unofficial student group Students for Justice in Palestine then held up a Palestinian flag. Davis, pleasantly surprised, pointed out the flag, which drew even louder applause from the crowd.

She stressed that critique of the state of Israel in no way amounts to anti-Semitism, observing that many Israelis denounce their own government.

Much like African-Americans in the United States, Palestinians have not “given up,” Davis said. They “continue to struggle” more than 70 years after the start of the Israeli-Palestinian conflict. The Palestinians “deserve justice,” she continued, “like everyone else in the world.”

Indeed, Davis went on to present her vision for a truly global community, suggesting that “perhaps the world itself needs to be rearranged.” When looking at any issue, Davis said it is important to examine it not at the individual level but the institutional one. It is only through a broader perspective that any real solutions to the problems she identified will be found.

Finding solutions to problems like racism and misogyny that are deeply embedded in our institutions will be no easy task, Davis said. “This is a very difficult moment to be living in the U.S.”

She was nonetheless optimistic for the social and political future of the United States. “I don’t believe that the current government represents … the vast majority,” she said. “I know they don’t.” Instead, those fighting oppressive structures represent it, she said, noting how she sees young people taking up this fight through contemporary movements like Black Lives Matter.

Complex problems like racism, for Davis, require complex solutions. “Whenever someone offers a simple solution,” she said, “question it.” After checking her phone to be sure that she had not gone over her allotted time, Davis called on the audience to continue work towards a more equal future, one, she said, that was long overdue.