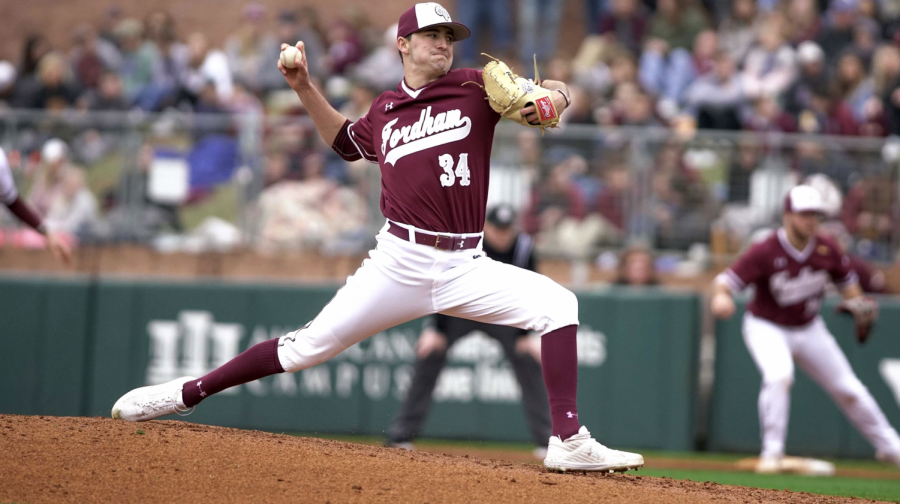 After a strong sophomore season, Brian Weissert, FCRH ’20, will try to step into a prominent role on a young Fordham pitching staff.

The success of Fordham sports in past years can be summarized with three overall win-loss records: 4–7, 9–22, and 35–19–1. These were the results tallied by Fordham’s primary men’s sports teams in the 2017-18 school year.

Football finished with only four wins and a fifth place finish in the Patriot League. Men’s basketball finished with 22 losses, enough to place them dead last in the Atlantic 10, providing fans with little reason to ever visit Rose Hill Gymnasium.

While these two teams struggled to surpass mediocrity, Fordham Baseball upheld the school’s name and more than surpassed its recent reputation. Going 16–8 in conference play tied them for second place in the standings, and the team entered the Atlantic 10 championship tournament as a very hopeful 3 seed. Their fortune, however, would not follow them into the playoffs.

As the 3 seed, Fordham played the 6 seed, Virginia Commonwealth University, and a late rally secured them a first round victory by a 3–2 score. The win would match them up with the 2 seed, George Mason University, and as the competition became tougher, Fordham struggled.

Despite an eight-inning, seven-strikeout performance from Anthony Dimeglio, Fordham College at Rose Hill (FCRH) ’19, Fordham’s offense was completely stifled in a 4-0 defeat. In a double elimination tournament, hope remained, but also literally signifies the beginning of the end.

Finding themselves in the loser’s bracket, Fordham hoped to rally from the defeat against a much weaker 7 seed in George Washington University. For some reason, however, Fordham’s bats remained dormant, and they lost again by a score of 5–0. George Washington’s starting pitcher threw a complete game shutout to end the Rams’ season on a whimper, far from what they had aspired to only a week prior.

Despite ending on a disappointing note, the Rams’ season was a success all the same, and the question on everyone’s minds is whether they can progress even further this season.

When evaluating a team’s progress by season, it is important to keep players in key roles. While the Fordham offensive lineup has remained relatively untouched, the pitching staff has lost several key players. Starting pitcher and team captain Ben Greenberg, FCRH ’18, has graduated, while Reiss Knehr, FCRH ’19, a pitcher and infielder for the team, was drafted by the San Diego Padres in the 20th round of the Major League Baseball Draft. The only remaining starting pitcher from last season is Anthony Dimeglio, who will step into a leadership role as a senior on what will inevitably be a much younger pitching staff.

Another older player Fordham will depend on is catcher Justin Bardwell, FCRH ’19. The only senior position player, Bardwell has received nothing but accolades over two seasons of stellar baseball behind the plate, having been placed on the Johnny Bench Award Watch List in both 2017 and 2018. In his final year, he will look to lead a younger team that he has thrived on to bigger and better things.

As one of the more successful teams at Fordham, the baseball team’s story this year is different from many of their counterparts. They do not need to turn things around as the men’s basketball team has attempted to do, nor must they develop their younger talent like the football team.

Fordham Baseball’s previous success in recruiting and developing its talent has led it to a serious opportunity to succeed. The team lost several key players, but its offensive core has remained intact while its less experienced pitching staff is more than prepared to fill the shoes left by their highly successful predecessors.

As warmer weather slowly approaches New York, Fordham Baseball will be a team to watch as they move closer and closer to toppling the Atlantic 10.