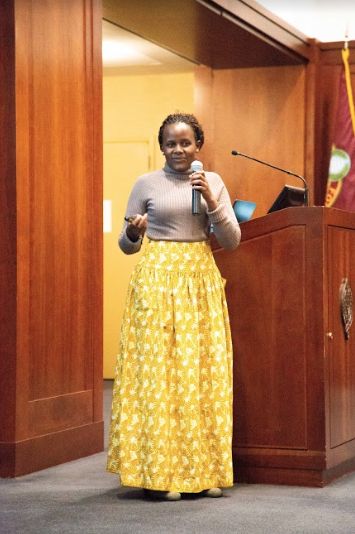 Mireille Twayigira spoke at Fordham Lincoln Center about her experiences as a refugee in central Africa.

In 1994, the world was shocked by one of the quickest and most brutal genocides in human history. In Rwanda, a small country in central Africa, nearly one million people were killed in less than one hundred days as a result of post-colonial political tensions. Neighbor turned on neighbor as the aftershocks from European colonial policies generated conflict between the nation’s seven million residents, resulting in the extermination of nearly one seventh of the country’s total population.

Dr. Mireille Twayigira was just two years old when her home country descended into chaos. When the genocide took her father, she fled Rwanda with her family. Twenty-five years later, she visited Fordham Lincoln Center to share her experiences as a refugee in central Africa.

On Thursday, Feb. 28, Fordham University’s Institute of International Humanitarian Affairs (IIHA) invited Twayigira of the Jesuit Refugee Service (JRS) to speak on the lives of refugees and the importance of education in humanitarian missions. As a Jesuit-affiliated nonprofit, JRS seeks to fulfill a religious call to service. It often works with Fordham University in its international mission to provide aid and service to refugee populations.

Twayigira, refugee education advocate at the JRS, shared how education helped shape her life with Fordham students, faculty and alumni, as well as New Yorkers interested in the open lecture.

“Up until I was 19 years old, I only saw tragedy,” Twayigira said. “It was through education that I found hope.”

Twayigira spent her entire childhood as a refugee. When she fled Rwanda at two, she did not have a father. Traveling on foot through the Congo, she lost her sister to illness. By the time she was four years old, her mother had passed away as well.

Stealing to survive and owning very few possessions, she moved between refugee camps in Angola and Zambia before finding a more permanent camp in Malawi. Having traveled approximately the distance from New York City to Los Angeles on foot, she and her grandfather were all that was left from her family.

She was able to find some semblance of childhood in the Dzaleka Refugee Camp, where she attended school and made friends. Twayigira believed her experiences with education gave her the confidence to transform her life into “something meaningful,” instead of succumbing to the situations she was dealt.

Her grandfather inspired her to pursue her education as fiercely as she could before he passed. She graduated among the top of her class at the high school established by the JRS in Dzaleka Camp, and was one of a handful of refugee students granted a scholarship to study medicine in China.

Through China’s refugee education program, she became a doctor. She returned to Malawi to work with the JRS, the organization responsible for her access to high school, and encourage refugee students to pursue higher education.

Twayigira passionately believed that education is often the only option for refugees to reclaim their lives and resettle.

“I’m living proof of the untapped potential of refugees,” she said. “Education is the bridge to success.”

Twayigira also shared with the group the importance and scope of worldwide refugee populations. “Only 2 percent of all humanitarian aid goes towards education,” said Twayigira. “Refugee crises are often seen as short term issues,” she said. “Why invest in a long term solution like education?”

She made it clear that failing to educate refugee populations tends to create more problems. Twayigira argued that in order for these people to become productive members of their society, they must have an education.

“A lot of people think it’s an issue of governments,” Twayigira said. “But individuals have a role to play as well.”

According to the United Nations, the world’s refugee population is currently at an all time high. The majority of humanitarian aid funding in the United States comes from the U.S. Department of State. However, both nonprofits and religious organizations — such as the JRS — have long been a part of allowing individuals to serve refugees abroad and in the country. U.S. policies under the Trump administration have seen a sharp decline in both refugee aid funding and refugee admissions into the U.S.

Aidan Donaghy, Fordham College at Lincoln Center ’21, is the president of the Humanitarian Student Union Lincoln Center (HSULC). As a student advocacy and activism club for humanitarian issues on campus, HSULC has both hosted a refugee guest speaker and held meetings about worldwide refugee struggles this year.

In attempting to do so, Fordham’s IIHA co-hosted this event with the JRS to raise awareness about the ongoing worldwide refugee crisis. New York City has one of the country’s largest resettled refugee populations.

“You can volunteer at shelters, you can donate,” Twayigira said. “But more than that you can advocate for us and normalize refugee experiences.”