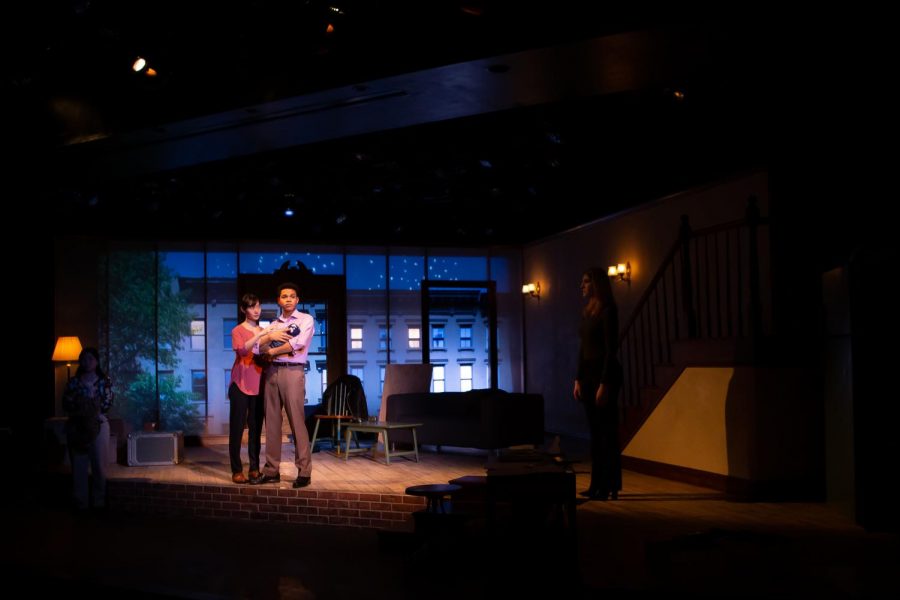 “Satellites” explores the harsh realities of gentrification in a Brooklyn neighborhood.

“It seems important to choose a play that reflects something of this time and is going to be able to either enlighten or correlate with what’s going on right now,” Carol Jeong, Fordham College at Lincoln Center (FCLC) ’19, said about “Satellites,” Fordham’s latest mainstage theater production written by Diana Son and directed by Sonoko Kawahara.

The play featured a diverse cast with an Asian-American female lead Nina, played by Jeong, alongside her African-American husband Miles. Coincidentally of the same name, Miles Gutierrez-Riley, FCLC ’20, took on this role in the show.

“Satellites” tells the story of a young couple who moves to a Brooklyn neighborhood with their first child in the midst of gentrification. Miles has lost his job and Nina is struggling to balance work and home life.

To both Jeong and Kawahara, the biggest challenge was facing the ugly, messy side of the human condition.

“We don’t need clean talk,” Kawahara said. She explained that she hoped the play would uncover the racial issues present in the world today.

“Maybe because of my experience,” Kawahara said, “I have a desire to talk honestly without fear of being attacked by somebody else.” Originally from Tokyo, Kawahara does not consider herself an American, but an Asian who came to America.

She described Nina and Miles’s struggle of coming to terms with their own identities in the play and raised the question of whether or not they should force themselves into a community or create their own concept of what community means to them.

Moving to Brooklyn seemed like a good idea at first, with Nina and Miles’ child exposed to so many different people in one place. But as the show progresses, it becomes evident that just because various groups of people are gathered together doesn’t mean that they will all get along.

Kawahara described the negative aspects of diversity which are explored in the show. She explained that while diversity is usually seen as a positive term, it often leads to the categorization of many different groups of people.

Although the play highlights a diverse set of characters, there is a lot of social conflict between them. “I’m more interested in each person, among the diversity,” Kawahara said. “I think the audience can approach each individual character as individual.”

This examination seems to be crucial to understanding this production — Jeong described it as a story of isolation for many different characters in the play.

Throughout the play, Nina feels overwhelmed and underappreciated by those around her.

Kit, Nina’s business partner, feels she is working by herself as Nina focuses on her baby and moving into her new home. Miles struggles to connect to his wife and his daughter, Hannah, who cries nearly every time he holds her.

All of the characters face their own problems and fears in this play. The title, “Satellites,” comes from the idea that everything orbits around Miles’s and Nina’s baby, each satellite connected to the other yet bound to their own tracks, Jeong explained.

For her, the story hits close to home because, like Nina, she is also Korean-American. Nevertheless, “Satellites” is a play that anyone can relate to, Jeong explained.

Nina represents a maternal character many of us know. She is constantly working, trying to take care of her house and children and does not often receive the recognition she deserves.

“She is the most efficient person that I’ve ever met or been a part of,” Jeong said.

Nina’s anger towards other characters adds to the messiness of the play that makes it so sensible and influential. The racial, familial and identity issues the show confronts are too often shoved aside, according to Jeong.

“I took a lot away from this play about just humanity in general,” Jeong said, “as well as the specifics of how race, as well as class, as well as gender, as well as family dynamics really come into a person’s life and how we really can’t know someone until we really get to know them.”