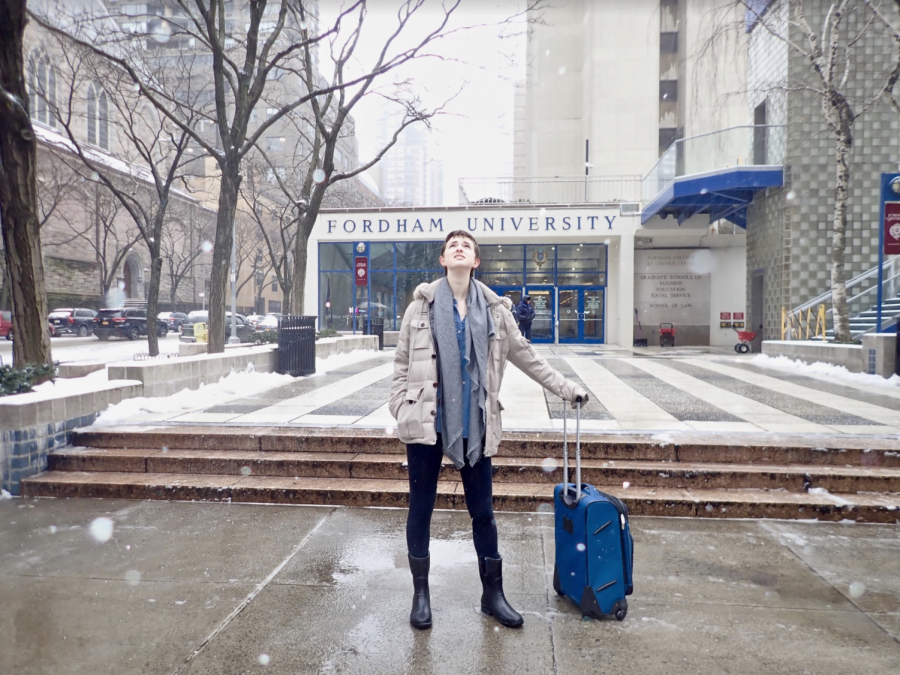 As Fordham continues to become a more competitive institution, it draws more students from across the country and the world. First-year students who travel far from home often flock to McKeon Hall, Fordham’s 22-story, multi-million-dollar residence hall sitting atop the law school.

Despite some issues earlier this year in accommodating Fordham’s growing class sizes, most resident freshmen at Fordham Lincoln Center are often ecstatic to call McKeon their home. Those who do are treated to stunning views of New York City, but some freshmen are stunned by another aspect of living in McKeon: being barred from the building during Fordham’s seasonal breaks.

Rosa Schembari, Fordham College at Lincoln Center (FCLC) ’22, recalls being sent an email early in spring semester that alerted her to McKeon’s closure in mid-March. “All it basically said was ‘McKeon will be closed for the week of spring break,’” she recounted. “My first thought was, ‘Well, now I need a place to stay.’”

Nearly a month later, on Feb. 14, the Office of Residential life sent a follow-up email with more detail about spring break. According to the email, only international students may apply to stay in McMahon over spring break. Applications will be either accepted or denied on March 5.

Matthew Chen, FCLC ’22 and an international student, recalls being frustrated when he saw the first email in his inbox. “It’s relatively short notice, to do something like that,” he said. “I live 16 hours away by flight, and tickets to Taiwan aren’t exactly cheap.”

Chen suggested that notifying freshmen about McKeon’s closures further in advance would be more helpful. “I feel like they should give one comprehensive schedule at the beginning of the year, so I can book my flights in August,” he said. “Or the very least, they should explain our housing options in the [first] email.”

Schembari expressed a similar frustration about understanding the options for housing outside of McKeon. “The information is not very accessible, and freshmen don’t always know where to look.”

McKeon residents faced similar time cutoffs during winter break. Any resident still inside McKeon Hall after the mandated time risked facing a fine of $75. Fines both accrued and increased the longer residents stayed in the building. There was no general application or waiver for freshmen residents wishing to remain in McKeon, but all freshmen residents were able to stay with a host in McMahon Hall over winter break if they submitted an application.

“I was lucky that my dad came to pick me up when the hour came,” Schembari, a Pennsylvania native, said. “But my sister, who also goes to school in the city, got out on a different day so my dad had to make two trips,” she said. “That’s a long drive. If they let me stay for a few extra days, he wouldn’t have had to.”

Chen arranged for a flight out of New York without much difficulty but faced a stressful situation flying back into the city. “On the flight, I learned McKeon wasn’t open yet, so I had to look at hotels,” he said.

Chen expressed that had instructions been more clear, he would not have booked his flight for the Saturday before the building opened.

While he was eventually able to find a place to sleep for the night, he was exasperated that Fordham had such a short window for students to move back in. “You can’t just expect people to come in on Sunday and not be jet-lagged on Monday. At the very least, have the building open the full weekend before.”

However, some residents of McKeon were not able to find reasonable accommodations during winter break.

One student, who asked to remain anonymous because of her embarrassment about the experience, explained her difficulty finding a room the weekend before school started in January. “I’m not an international student, but my parents are living abroad,” she said. “I don’t have a home to go back to in the U.S., and it’s not like I can fly over the Pacific whenever I want. It’s inconvenient, and it costs a ton of money.”

She ended up visiting her hometown in the U.S., opting to fly domestic and stay with a few friends rather than book an international flight. To save money, she booked the return flight for a few days before McKeon reopened. “Weekend tickets are so expensive,” she said. “I asked myself, do I spend money on tickets or housing?” She resolved she could save money if she was able to stay with friends who commuted to campus.

“I had to house hop, but I didn’t have any friends to stay with,” she explained. “I asked my two friends who had places in the city and neither of them could host me — sometimes that just happens.”

Her solution was less than comfortable. “I solved that problem by sleeping with two different hookups over two nights,” she said.

“I spent the day between those nights just wandering around the city,” she remembered. “I was tired, and I wore the same outfit all weekend because I didn’t have a place to change. I didn’t get to shower either.

“It felt like I had to trade sexual favors for a place to sleep,” she said.

All three students — each having mentioned they gladly would have stayed in New York over spring break, if given the option — are currently working on solutions for housing in March.

Schembari is planning to fly out to California with a group and stay with a friend instead of paying for bus tickets to and from her small hometown. However, since she is financing her trip on her own budget, purchasing cheaper tickets resulted in a less-than-optimal compromise.

“We could either spend $200 more and get back in time for class, or we could save money and skip our Monday classes,” she said, explaining the difficulty with purchasing an affordable Sunday flight. “It’s almost like Fordham wants us to make bad decisions.”

Chen, who has not arranged a living situation yet, noted that “every solution to this problem costs money.”

“Now I’m stuck with the problem of either flying back or staying with someone, which means I’d have to convince my parents that it’s okay,” he said.

The third student was simply annoyed she faced a similar dilemma to last break.

Nick Wai, FCLC ’22, is a programming coordinator with the Residence Hall Association (RHA). Wai said that students raised “many concerns” about McKeon’s closure policies during RHA’s freshmen-exclusive meeting on Feb. 6. “We have relayed this information to the Residential Life staff members and are continuing a conversation,” he said.

Despite the fact that Residential Life sent an email on Feb. 14 that stated only international students may stay in McMahon over spring break, Wai reported the Office of Residential Life informed RHA differently. According to Wai, Residential Life claimed that all freshmen “students can relocate to McMahon if they chose to stay in the city.”

According to Campbell, McKeon Hall “closes during periods when community dining is not operational.”

“McMahon hall is in continuous operation because of the apartment style configuration,” she said, in reference to the kitchens available for McMahon residents. “McKeon students are encouraged to seek guest pass accommodation with students who reside in McMahon.”

In reference to the email sent out on Feb. 14, Campbell stated, “we recently sent a survey to students to inquire if they need accommodation during the upcoming break. Priority consideration is given to international students.”

The email sent on the Feb. 14 did not explain this option for U.S. residents.

“Students are for the most part compliant with leaving the building as required,” Campbell said. “To students who have inquired, we have tried to accommodate their needs based on the specific issues.”

On Thursday, Feb. 28, the Office of Residential Life released a third email concerning spring break closures for McKeon hall. The most recent email restates the times when the residence hall will close, and provides a clearer explanation for the policy regarding freshmen options. According to the email, any student that has an “extreme circumstance” may apply for a temporary housing in McMahon.

The deadline to apply for McMahon housing assignments has been extended to Thursday, Mar. 7. Students will be notified of their temporary housing assignment on Tuesday, Mar. 12. The email encouraged students with additional questions to reach out to the Office of Residential Life.