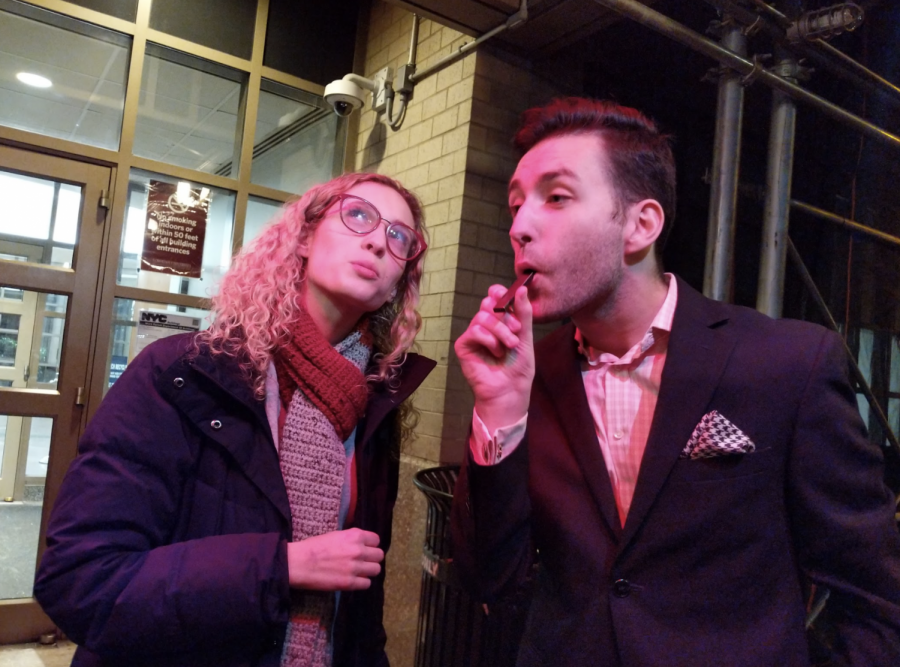 Juuls are a common sight on Fordham's campuses.

By RUBY GARA and SOPHIE PARTRIDGE-HICKS

On Jan. 1, 2018, the state of New York passed a Smoke-Free Air Act, criminalizing the use of e-cigarettes in public and workplaces where smoking is prohibited, including restaurants and offices, parks and beaches.

John Carroll, associate vice president for public safety, confirmed that Fordham University enforces the law, saying that “in accordance with New York State law, smoking is prohibited inside all buildings” on all campuses.

Fordham’s student handbook states that failure to comply with these rules “will result in verbal or written warning, educational sanctions or fines ($50).” Repeated violations could lead to expulsion from the residence halls.

However, even with a strict ban against e-cigarettes and vaping, nicotine devices are prolific within the Fordham community. Specifically, the use of Juuls — small e-cigarettes known for their high nicotine content — are incredibly popular on campus. Empty Juul pods (the devices’ nicotine cartridges) are often found scattered around the residence halls, and students can frequently be seen exhaling vapor on the Outdoor Plaza . . . sometimes even in class.

Though Juuls were only introduced by PAX labs in June 2015, they have skyrocketed in popularity and now dominate the vaping industry. With a net value of approximately $16 billion, the company made more than $1 billion in revenue in 2018 alone.

Dubbed “the iPhone of the vaping world,” the sleek and modern design of the Juul enables users to smoke them discreetly. The device is small enough to conceal inside a person’s hand and resembles a flash drive. With its slim rectangular shape, the Juul looks nothing like the traditional e-cigarettes, as most are much larger and have a box-like structure that holds a liquid-filled tank.

Peter Thomann, Fordham College at Lincoln Center ’20 (FCLC), said, “I feel like it’s hard to monitor the use of Juuls because they are virtually unrecognizable as any kind of e-cigarette.” He continued, “That’s why so many people get away with using them secretly.”

Carroll said that “we have no record of an incident where a complaint was made” regarding vaping. Even with rules in place, students can still be seen vaping and Juuling throughout the school’s hallways, in the dorms and even in classes.

However, the challenge of monitoring the use of e-cigarettes is not just limited to the Fordham community. Schools and colleges across the country are struggling to address the popularity of Juuls.

Juul Labs, the company that sells the cigarette substitute, has been accused of marketing to younger audiences, notably the high school and college student communities. Subsequently, on April 28, 2018, the Food and Drug Administration announced an investigation into Juuls and their popularity among younger people.

Most concerning to consumers is that the health effects of vaping are not fully understood by its primary demographic.

Sophia Mazurowski, FCLC ’21, warned of the dangers of Juuling that are not immediately obvious. “The way I started, and the way it seems most people start, is that it seems fun and harmless at first,” she said. “If you’re not careful, it’s easy to become addicted.”

While it is commonly thought that e-cigarettes are less addictive, the devices deliver nicotine faster to users and in higher doses compared to traditional cigarettes. According to National Center for Health research, this makes the Juul device incredibly addictive.

Thomann added, “If you’re smoking a cigarette, you have to go outside, but with the Juul you can use it all the time. I think Juul users probably have more nicotine in their systems compared to cigarette smokers purely because they are just so easy to use.”

E-cigarettes, in some cases, have been linked to an irreversible lung disease, otherwise known as “popcorn lung.” The life-threatening condition first started in the 1990s at a popcorn factory, when employees inhaled the chemicals that enhance the buttery flavor. Though suspicions rose concerning the Juul’s “creme brulee” pod, the company emphasized on their website they do not use the chemical as a flavor ingredient.

Michael Finnan, Gabelli School of Business ’21, said, “I don’t think anyone knows the effects of Juuling on health. So many people use them that they have become normalized, but I know a lot of users who complain about their throats hurting or feeling nauseated if they smoke a Juul too much.”

For now, the popularity of the Juul continues to rise.