Only Venezuelans Can Decide Their Fate 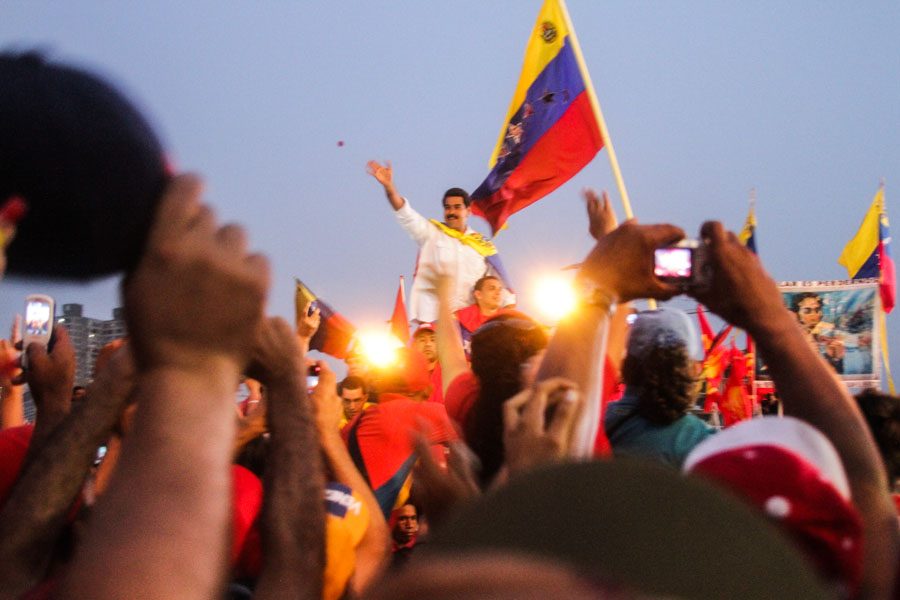 During Trump’s recent State of the Union address, there were plenty of matters spoken of that foster a great partisan divide. However, there was one issue that roused support, and has roused support for over a century, on both sides of the political aisle: U.S. imperialism. Its recent manifestation is the attempt to create the conditions for and help execute an undemocratic regime change in Venezuela. Trump and the near-entirety of Congress support delegitimizing and deposing Venezuelan president Nicolás Maduro.

Less than two weeks before the State of the Union address, the right-wing leader of the opposition to Maduro’s presidency, Juan Guiado, declared himself the interim president of the country. He did so because he along with opposition-controlled National Assembly contend that the most recent elections were unfair, therefore, the presidency is actually vacant and Maduro is not the legitimate president of the country. In the event that the presidency is considered vacant or usurped, according to the Venezuelan constitution, the leader of the National Assembly, which is now Juan Guaido, becomes president. Of course, this vacancy has only been asserted by Maduro’s opposition. Almost immediately after this the United States, Canada, Israel, Brazil and more announced their recognition of Guaido as the acting president of the country. If this sounds confusing to you, that’s because it should.

Guaido announced himself as the interim president despite the fact that no election was held. When the most recent presidential election did occur in Venezuela, Guiado received a grand total of 0 votes because he didn’t even run. While critics of Maduro claim the election was unfair, there is an abundance of evidence which contradicts the idea that Venezuelan politics are rigged by Maduro’s governance. For example, whereas many outlets are reporting that opposition candidates have been jailed and threatened, Guaido himself was elected as the leader of the National Assembly just a few years earlier. If Maduro was running an autocratic dictatorship, would his opposing party be able to win the national assembly while he was president?

Furthermore, when Maduro was first elected in 2013, a report published by the Washington-based Carter Center (founded by Jimmy Carter and funded by the U.S. government) found that the election was fair. In 2012, Jimmy Carter himself even went as far as to declare that “The election process in Venezuela is the best in the world.”

As for the most recent election, it is worth noting that two candidates who oppose Maduro’s platform ran and lost. Just under half of the country went to the polls, and nearly 70% of voters chose Maduro. For comparison, the most recent American election in 2018 had a turnout of 48%; in Venezuela’s most recent election, 46% of the population turned out. While today the American media has given generous and extensive coverage of the protestors who opposed Maduro’s presidency, they have seemingly ignored the overwhelming demonstrations that have defended and supported Maduro’s presidency which have been occurring throughout Venezuela simultaneously.

Regardless of how you may feel about Maduro’s presidency and the recent elections, it is clear that there is evidence which contradicts the narrative that the U.S. media has constructed. But this article is not so much about the controversy created by American media outlets over Venezuelan politics, it’s about whether or not the United States has the right to intervene in Venezuela’s affairs in the first place.

The history of U.S. interference in Venezuela is long and complex, but the crash-course version goes like this: The Bolivarian revolution was ignited in 1998, and it was led by Hugo Chavez. The revolution was centered around the redistribution of Venezuela’s oil wealth, which had previously been exploited by foreign governments and mostly U.S. corporations, into social programs to enhance the welfare of the Venezuelan people. Chavez was elected in 1998 by a landslide, and under his governance, a new constitution was created in 1999. The ideology behind the revolutionary efforts is known as Chavismo, which is essentially a socialist ideology rooted in anti-poverty campaigns that Chavez initiated once in office. He served as president until his death in 2013, and Nicolás Maduro was democratically elected as his successor.

Since Maduro became president, U.S.–Venezuela relations have deteriorated. The U.S. resorted to economic warfare in 2014 when Congress passed legislation that initiated economic sanctions against Venezuela. Though these sanctions were said to be directed against key people within the Venezuelan government whom the U.S. alleged were responsible for human rights violations, economic sanctions like the ones often used by the U.S. do not harm one person, they harm the entirety of a given country. In this case, U.S. sanctions have actively caused the Venezuelan economy to decline. Since then, Venezuela’s economy has almost completely collapsed, propelling the country into crisis.

Millions of people have fled the country, especially over the past few years. Many political commentators have used the suffering of the Venezuelan people to criticize Chavismo and socialism more broadly. Ironically enough, they never seem to mention the sanctions that the United States has imposed on Venezuela. After all, long before the Bolivarian revolution, the Venezuelan economy was essentially constructed around their oil reserves, and exploited by countries like the U.S. for exactly that purpose.

Why is oil so important to the recent coup attempt that’s been taking place? Well, you don’t have to take my word for it, because a current National Security Advisor to the Trump administration, John Bolton, told the world himself. Just after the U.S. conveniently recognized Guiado as president, John Bolton went on Fox News and said that it would make a “big difference to the United States, economically, if we could have American oil companies really invest in and produce the oil capabilities in Venezuela.”

The United States directly participating in the overthrowing of a democratically elected leader in order to extract profits from the country is by no means a new thing. Just ask Chile, where in 1973, the United States supported and participated in the violent overthrow of the democratically elected, socialist president, Salvadore Allende, which led to his murder. After, the country fell into the hands of a military dictatorship for over two decades. Or ask Nicaragua, where President Reagan used the money from arms sales to Iran in order to create, fund and arm a right-wing terrorist group known as the Contras who murdered thousands of people in the name of overthrowing their democratically elected, socialist government..

Countless more examples exist of the United States directly interfering and causing violence throughout Latin America and even throughout the world to achieve more profit for American corporations at the expense of the wellbeing of each different country’s citizens. The only thing that’s new with Venezuela is that this time, top government officials are no longer trying as hard to pretend that this is about human rights or democracy. Just like John Bolton said, it’s about oil.

This rings even more true today, because the United States has not only recognized Guaido as acting president, Congress has actually seized billions of dollars in assets from the aforementioned Venezuela state oil company. Is this how the United States does business? If we don’t like your leader, then we hold your country’s people hostage by seizing billions of dollars and strangling the economy? Historically speaking, that’s one of the many cruel things we have done in the line of business. Other notable examples of achieving our imperialist desires include but are not limited to: funding right-wing terrorist groups which have killed thousands of innocent people, attempting and in some cases successfully assassinating the leader we don’t like, directly invading the country, bombing the country and so on. All of this was and remains inhumane and illegal.

The next time you hear about the humanitarian crisis in Venezuela as justification for our current actions, ask if the person is familiar with the sanctions we’ve imposed on the country since Maduro’s first election. Or better yet, ask them if they think its humane for our country to seize the country’s oil assets — on which it’s economy relies — in order to create the suffering necessary to provoke a regime change. And if and when even more violent and severe actions are taken by this country — such as invading the country, or funding and arming fascist death squads like we have in the past — I urge you to condemn them. Hands off Venezuela.