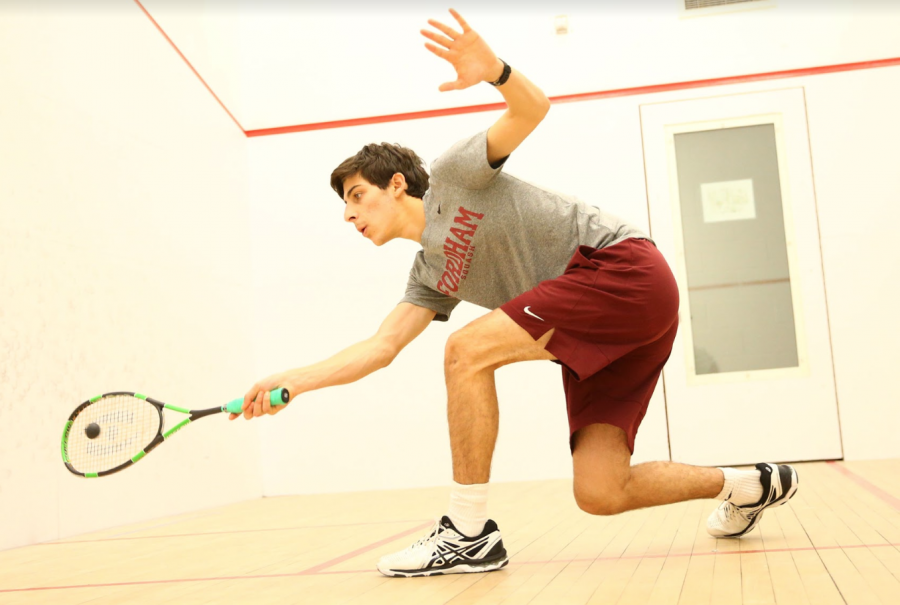 Justin Deckoff, FCRH '21, attempts a forehand stroke while warming up in the Lombardi Squash Courts.

Though the sport may be unfamiliar to most, the situation is common to all sports and life beyond. Fordham Squash had been in the same place the year before and had come up short. This year, the Chaffee Cup was once again within their grasp, and the victory that had eluded them previously was now once again a reality. They would have to fight the last few inches on the biggest stage of their careers to secure the hardest win of the weekend, which up to that point had been nothing short of astounding in itself.

In an odd twist of fate, Fordham found themselves with an old demon to exorcize in the first round against New York University (NYU). The rivalry between these two teams goes back decades, but recent history had proved bitter for Fordham. In the 2018 Championship Final, NYU defeated Fordham 6–3 in a shocking upset, as the Rams had been widely considered the favorite in the tournament. This year, they faced their rivals in the first round, revenge undoubtedly playing into the mindset of every player.

Fordham’s four players at the lower positions buoyed their team’s performance significantly. Justin Deckoff, Fordham College at Rose Hill (FCRH) ’21, Justin Esposito, FCRH ’19, and Winthrop Reed, FCRH ’22, dominated their games, taking nine sets out of 10 and securing three wins for their team. With four victories on the day, a win by Will Beatrez, FCRH ’19, over his NYU opponent would secure the victory for Fordham Squash.

In the first set, the pair found themselves tied at 10 for the first time, before Beatrez scored two points in a row to win 12–10. In the second set, his opponent took the lead early on the way to an 11–5 win, tying the game at one set apiece. In the third set, the two tied at 10 again, and this time neither player would yield. The game went deep into overtime before Beatrez could finally secure a 15–13 victory. In the fourth and final set, Beatrez bested his opponent in overtime once again, winning the set 12–10 and the game 3–1, advancing Fordham to the second round.

After winning an important game against NYU, Fordham’s second round against Hamilton College came much easier. The Rams jumped out to an early lead after wins by Deckoff, Patrick Rodden, Gabelli School of Business at Rose Hill (GSB) ’22, and Dylan Panichello, GSB at Rose Hill ’22. These would be followed by victories from Reed, Esposito, and Will Pantle, FCRH ‘’19, allowing Fordham to cruise to an easy 6–3 win. Once again, Fordham’s bottom four players came through, with Deckoff, Reed, Esposito, and Panchiello all winning their matches when called upon. The Rams had finally fought their way back to the dizzying heights from which they had fallen last year, and Northeastern University was the final hurdle on their journey to the top spot.

Fordham jumped to an early 2–1 lead, with wins from Deckoff and Beatrez once again providing their team with a strong start. In the next wave, Esposito and Pantle extended their team’s lead to 4–2. The Rams were one win away from the record books, and the win came swiftly. Douglass won his game in the top spot in three straight sets, and an additional win by Winthrop Reed secured a 6–3 win for Fordham over the Northeastern King Huskies to win the Chaffee Cup.

In an interesting turn, it was not the players at the top positions that secured the championship for Fordham. In positions six through nine, Fordham players went undefeated in three games, providing depth that other teams at this level could not compete with.

Fordham was never an underdog and was never faced with insurmountable odds over the course of the tournament. The story of this team performance is one of reclamation. Last year, the Rams were denied an honor they deserved, stunned by an inferior rival on the biggest stage. This year, Fordham overcame that old rival and did not lose focus, defeating two more stout opponents to realize the dream that had for too long been put on hold. In a university lacking in competitive sports teams, the driven success of Fordham Squash should stand as a shining example for other teams to follow.