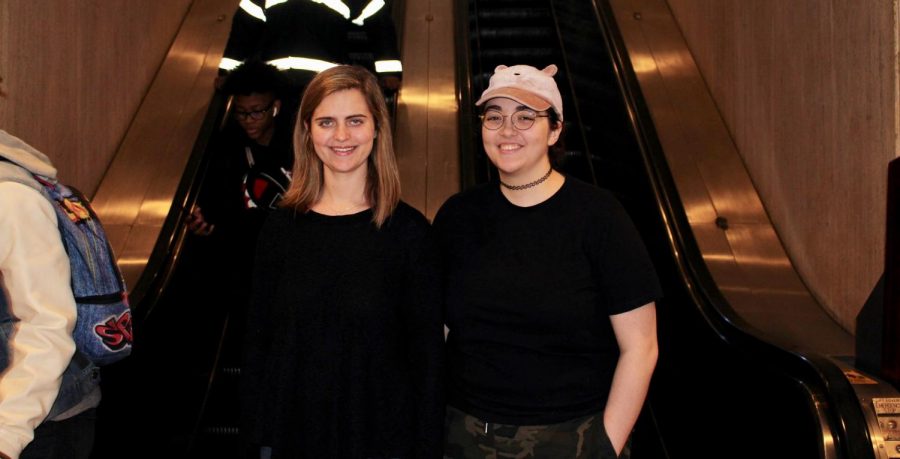 Cristina Pardo, Fordham College at Lincoln Center (FCLC) ’19, and Lucy Clancy, FCLC ’19, responded bluntly when asked if they thought Fordham was accommodating to students with disabilities.

Pardo and Clancy are president and vice president, respectively, of the Fordham Students for Disability Advocacy group (SDA). SDA’s mission, according to Pardo and Clancy, is to create a community for students with disabilities and to increase accessibility on campus. Clancy envisioned the club as “a safe space for students with disabilities to come and communicate, because there’s a lack of support systems here at Fordham.”

The two formed the group in fall 2017, although Pardo said that she had been thinking about forming a club like SDA since her sophomore year. She was encouraged by a professor to reach out to the Office of Disability Services (ODS) and gauge student interest.

Feedback to Pardo’s inquiry was so positive that branches of SDA were formed at both Lincoln Center and Rose Hill. The Rose Hill group, however, is still in the process of becoming an official club.

Pardo identified a surprising lack of wheelchair accessibility on campus. “I’ve never seen a person with a wheelchair in the Lowenstein elevators,” she said. “They’re so crowded that I feel like if you’re in a wheelchair you probably would feel uncomfortable.”

Many of the buildings at Rose Hill lack elevators altogether. “If you can’t walk up stairs, you can’t get to class,” Pardo said.

Even students without disabilities complain about the efficiency of Fordham’s elevators. Pardo stressed that increased accessibility regarding things like elevators “helps everyone.”

While elevator renovation or construction would likely be a relatively expensive endeavor, Pardo and Clancy explained that implementing smaller-scale accommodations would require little to no financial investment and would be equally impactful for students.

“Professors are not always amenable about accommodations,” Pardo said, citing strict attendance policies that can jeopardize the academic standing of students unable to attend class regularly. She said she knew a student with a chronic illness who was forced to withdraw from a course due to the professor’s unwillingness to alter his attendance policy. “Something like that is so easily fixed,” Pardo said. “You don’t have to pay any money to do anything about it.”

Such changes would “help a lot of students get education when they couldn’t before,” Pardo continued.

Pardo credited faculty members such as Anne Fernald, English professor and special advisor to the provost for faculty development, for her work in promoting accessibility on campus. Much of Fernald’s work as special advisor focuses on “teaching for the 21st century,” which for her entails “teaching students of all abilities and students with disabilities.”

Accessibility is a civil right for students under the Americans with Disabilities Act (ADA), and all Fordham students are guaranteed the right to equal access to education, Fernald said. Mere compliance with the law as outlined under the ADA, however, is “the floor of where we want to be,” she stressed. “What I am trying to do is help offer resources for faculty to think about accessibility for students in a richer and more aspirational way.”

As part of her efforts to educate faculty members on accessibility, Fernald sends monthly emails to faculty that outline inclusive pedagogical methodologies. An email from Jan. 24 stressed that “all students benefit” from such pedagogies. Fernald also organizes faculty workshops that cover similar material.

“Faculty at Fordham, by and large, are really hungry for resources to serve our students,” Fernald said. “There are some faculty, unfortunately, who have been slower to see the value of making this transformation.”

Clancy said she once had a professor who refused to allow her to take a test in the ODS and did not provide her with additional time for it. When she reported the incident to ODS, she felt that her concerns were not taken seriously. “They would not listen to me,” she said.

“That’s really terrible,” Pardo said of the incident. “You have to give students their accommodations.”

In an op-ed published in The Observer in fall 2018, Adriane Kong, FCLC ’22, wrote that a professor would not provide her with copies of her class notes because they contained original research and were considered intellectual property. Kong, who is deaf in one ear, struggled to hear class lectures and take notes herself. She ultimately had to drop the course.

Mary Byrnes, director of the ODS, said that in cases like Kong’s, the ODS works with students to provide alternative accommodations. While the ODS “cannot make professors hand over their notes,” she said, there are “other ways of helping a student obtain notes.” She explained that the ODS hires student note-takers to provide copies of class notes and is implementing a software program that both records and transcribes lectures.

The ODS cannot provide retroactive accommodations, Byrne said, and if students do not report an accommodation they need, “there’s nothing we can do.” She stressed, however, that the ODS “absolutely” explores all options regarding accommodations with students.

Pardo frequently returned to one word to describe the lack of accessibility on campus: “ridiculous.” She was clearly frustrated, but for her, emotional reactions can be catalysts for change. “We’re trying to inform people,” she said, “and get people angry.”

“Fordham needs to change,” she continued, before directing her comments towards the administration. “People are going to be mad at you if you don’t.”

The conversation regarding accessibility on campus is “really just beginning,” Fernald said. “I’m not under the illusion that we are there yet. I know we have a long way to go.” Like Pardo, she stressed that inclusivity benefits everyone at Fordham, not just students with disabilities. “The more diverse we are and the more we learn from each other in all our differences and with all our similarities,” she said, “the smarter and stronger and better we’ll become.”