Rainbow President Aims to Normalize Sex and Sexuality on Campus 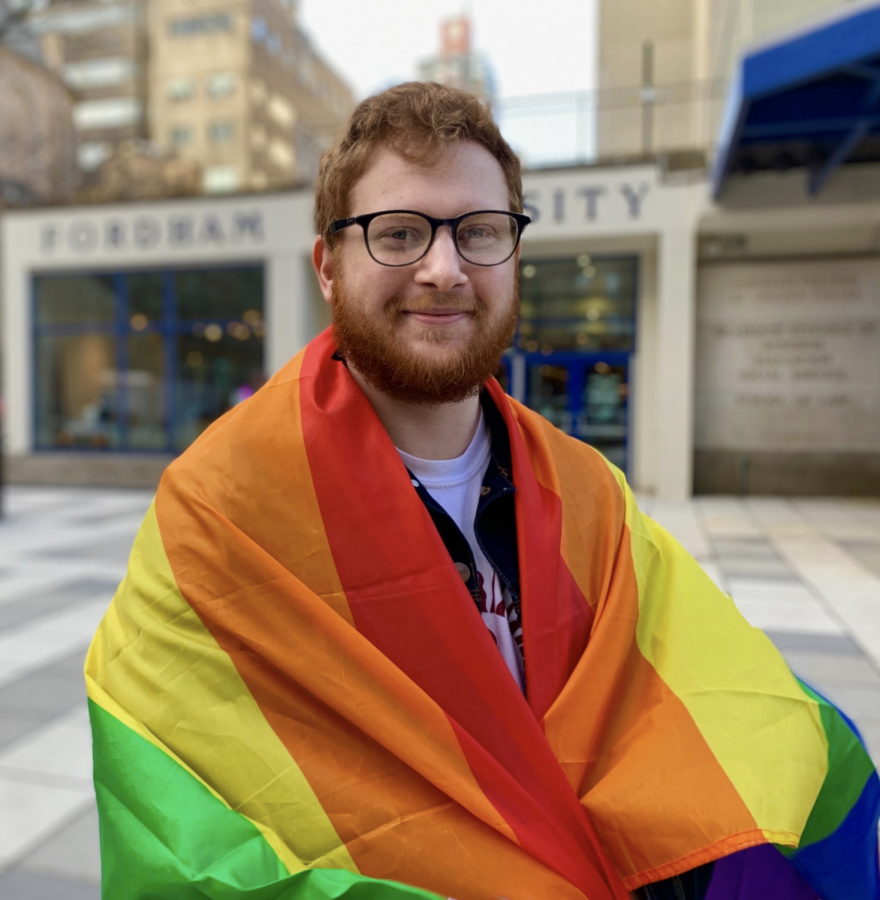 Bugbee has become a prominent voice for the LGBTQ community on campus. (AMINA VARGAS/THE OBSERVER)

When a younger Jack Bugbee, Fordham College at Lincoln Center (FCLC) ’19, stepped into his first Rainbow Alliance meeting freshman year, he had no way of knowing how the club would impact both him and Fordham as a whole. He recalls that, at the time, he saw the group as an inclusive space for the university’s LGBTQ presence, a spot to “talk about some gay stuff.”

You may have seen him on campus, sporting a hard-to-miss fur coat and rocking his distinctive red hair. Perhaps you’ve seen him at Queer Prom, donning a tux and rainbow pin. Many are most familiar with Bugbee from his performance as Rosie “Ram This” Hill in Fordham’s first-ever drag show last semester.

Bugbee has always been proud of his identity as a young gay man. He speaks honestly about his public persona — including how, compared to others in the LGBTQ community, he is considered among his peers to be a “straight-passing person.” He joked that this “means I don’t dress as well as other gays do.” For him, the ability to pass as a straight man granted him the privilege of never being forced to come out too early. His uncle is also gay, which made for a smoother coming-out experience at home.

“I was literally upstairs in my room on FaceTime with one of my friends,” he said, “and she was like, ‘Do your parents know you’re gay?’ And I was like, ‘Let me find out.’

He fully acknowledged the rarity of his experience. “One person I knew in high school, he was kicked out of his house for a little over a month after he came out,” Bugbee recalled. “It’s definitely not a universal experience, my experience.”

While things fell into place at home, Bugbee still faced traditional bullying at school. He holds the community that Rainbow fosters in high regard, noting that for many young LGBTQ individuals, it is important to see that there are so many other queer people like them.

Rainbow is more than a club to Bugbee. “It has been a part of my identity on campus,” he said. “It’s really helped me come into my own as an activist and also given me a place where I can be openly gay without judgment, whereas that’s not really a thing that you can do in other places of the country and even just the state.”

Rainbow has indeed catapulted him and other queer students into several major university conversations about sexual and gender identity. Between the drag show and the transgender rights rally from last semester alone, Bugbee has become an important voice for the LGBTQ community on campus.

In Bugbee’s opinion, Fordham has a distinct laissez-faire approach to queer students.

“When it comes to enacting policy change and actively supporting their students, they kind of fall short, and I think a lot of it is because they probably get a lot of money from conservative donors,” he said. “That’s more important to them than the relatively small population of LGBTQ students is, just because for them to respect us and uphold our rights and everything, it’s easier for them to just take the money and ignore us.”

Based on a recent Observer survey of 315 undergraduates, 65.3 percent of the student population identifies as heterosexual, with 34.7 percent identifying with a sexuality other than heterosexual.

When Rainbow members aren’t fighting for queer student rights, they also foster formative experiences in the exploration of sexual and gender identities. Bugbee said that the bonds he has made with others in the club have cultivated meaningful discussions on queer relationship values.

“It kind of gives you a way to have that network of support,” he explained, “because it’s difficult as someone who is LGBTQ to discuss what it means to have a healthy relationship with people who aren’t LGBTQ.”

For Bugbee, Rainbow has allowed him and his close friends to navigate the state of “romantic immaturity” that he and many other gay men have experienced. “We don’t get to do the like, ‘Oh she kissed me on the cheek, now we’re dating and we’re in love and we’re getting married next Thursday,” he said. “We haven’t learned what things are okay, not okay, … just because if we did, then we would get attacked, beat up, told that we’re wrong.”

For those still navigating their sexual and gender identities, Bugbee offers comforting advice:  “You’re in your 20s. You don’t have to have your entire life figured out.”

“There’s this whole myth that we’re supposed to have our lives figured out right as we’re going through college,” he continued. “We’re supposed to know what career we have and we’re supposed to meet the love of our life in college and get married and whatever. And it’s like, ‘Mmm, yeah, but most people don’t do that.’ So you’re probably fine.”

This month will keep Bugbee busy; in addition to the upcoming Queer Prom on April 12, Rainbow is working with Black Student Alliance on several projects celebrating the LGBTQ-black community.

“The modern gay rights movement was started by black trans women,” he explained. “All of our meeting topics are going to be centering around the black gay experience.”