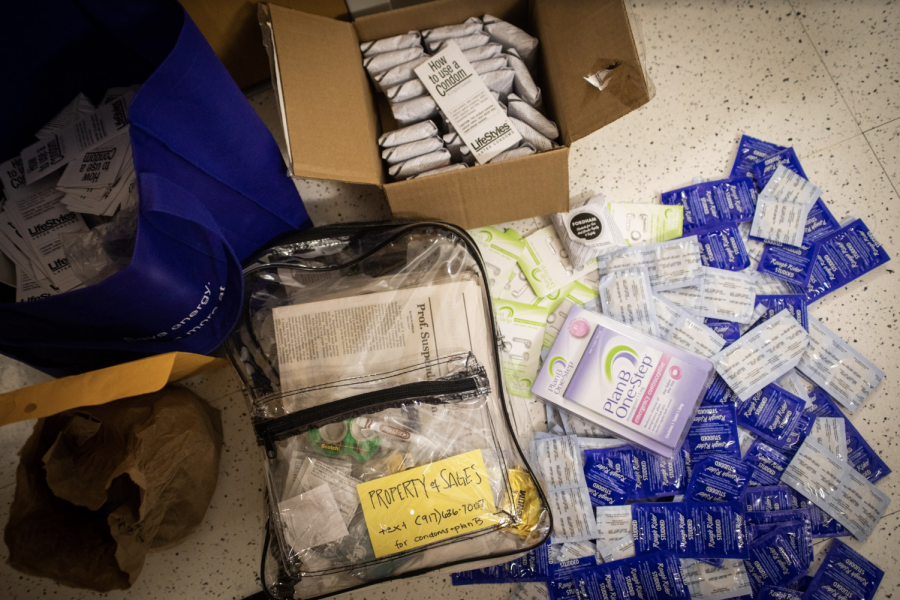 SAGES runs a hotline that provides contraceptives to students upon request: the "Condom Fairy."

According to Fordham’s University Health Services (UHS), the university will renew prescriptions or provide treatments for documented medical diagnoses unrelated to contraception. However, as hormonal birth control is most commonly used as a contraceptive, UHS does not write new prescriptions for students — in accordance with Catholic doctrine.

Silang visited the health center seeking a new prescription, but was denied the birth control she needed to help treat her cysts. Later that week, she collapsed and was taken to the hospital.

Silang’s experience ignited conversations about sexual health policies throughout the Fordham community. While some sought solutions from medical providers off-campus, others took matters of advocating for policy change into their own hands. Shortly after her medical emergency, she helped found the Students for Sex and Gender Equity and Safety (SAGES) Coalition.

While they behave much like an advocacy club on Fordham’s campuses, SAGES is not officially sanctioned by the university. In fact, according to the members of SAGES, Fordham’s administration actually has it out for the group — primarily because they make a habit of disobeying university policies they find unjust.

“There’s a very clear demonstrated need for information and support in accessing resources that Fordham refuses to address, so SAGES was formed as a reaction to that,” one member said in an anonymous group interview. While SAGES has a somewhat public presence, individual members are concerned that revealing their identities in interviews could get them into trouble.

SAGES has a very clear goal when it comes to how they operate on campus. They want to raise awareness about healthy sexual practices, advocate for sex and gender equality among students and provide services that they feel Fordham chooses to ignore because of its religious traditions.

With that goal has come a great deal of demonstrating, petitioning and campaigning against rules established by the university.

“Fordham’s policies are very backwards,” another member said. According to that same member, SAGES exists to subvert these policies that are “harmful to the overall health” of the student body.

A few years ago, an individual affiliated with SAGES began the “just-a-friend” network, known colloquially — if known at all — as the “SAGES Condom Fairy.” Though it began as one individual distributing condoms on-call without the help of the larger SAGES organization, the group has since adopted the hotline as one of its primary services on campus.

“We have tons of repeat customers,” one distributor said. “People really need condoms, and they love free ones.” This member believed that Fordham, with its policies preventing all contraceptive distribution on campus, actively promotes an unhealthy atmosphere when it comes to sexual activity.

SAGES runs the hotline on an a volunteer basis. All of the condoms they distribute are received solely through donations.

Anyone at the university can text the SAGES phone numbers (one for each campus) and members will find a location on campus to deliver condoms, Plan B or other contraceptives. Some students even use the hotline for questions about personal sexual health or services offered around the city.

“There are organizations that provide condoms specifically for schools like [Fordham]” one student mentioned. Those organizations primarily consist of local clinics and a nonprofit called The Great American Condom Campaign, which provide SAGES members with “boxes of free condoms” to be distributed on campus.

However, outside organizations have not been the only ones to show support for SAGES. Members report that overall, the Class of ’22 — especially on the Lincoln Center campus —  has shown significantly more interest and investment in the goals of the group than previous classes, giving the organization enough momentum to carry through with other goals.

It began last year during various admitted students events, where SAGES members handed out flyers and pamphlets to incoming students on the sidewalks surrounding Fordham Lincoln Center. This was done to promote students choosing Fordham, but also to root an understanding of SAGES and Fordham’s sexual health policies in the incoming class.

When the semester began, they organized a lecture in a Fordham law school classroom called “Disorientation,” an event designed to catch students (especially freshman) up on the information about Fordham’s history and sexual health not shared during the regular orientation week.

The freshman class was shocked by much of what they heard. This resulted in a large influx of members for the organization, as well as an increase in general knowledge of the SAGES organization. According to one distributor, they are even the most common users of the “Condom Fairy.”

Students in the Class of ’22 have labeled SAGES everything from “too aggressive” to “much needed.” While opinions may vary wildly across the Class as a whole, one thing is certain: they are talking about SAGES much more.

This semester, SAGES is hoping to capitalize on that energy by putting effort towards pushing for policy change with its more public subgroup, The Positive. In 2014, The Positive, originally a group of students dissatisfied with SAGES, was established to address gender and sex-based discrimination on Fordham campuses. Unlike SAGES, members of The Positive have publicly engaged with staff and administration to make policy changes, attending faculty meetings and making policy recommendations to push Fordham’s administration in directions they’re less hesitant to go.

Because of The Positive’s efforts last year, all gender signage was installed on single-occupancy restrooms over the summer, and their lobbying has resulted in several academic departments adopting a chosen name policy for classroom attendance and discussion.

Currently, the group’s goals are to implement a universal chosen name policy and to challenge dorming policies that are not inclusive to trans students. It also plans to host more large-scale events like the October’s Trans Rights Rally, which drew nearly one hundred students.

The two groups, while technically remaining separate, have started working together on issues of common ground. Some members of SAGES admitted that the inter-group politics of these organizations can be confusing, especially because membership has changed frequently and some individuals work within both groups. As one member stated, “If you think about the history of The Positive, the naming of the group was a direct reflection of SAGES which was considered to be ‘The Negative.’

“We’re trying to break that down and make the work that we’re doing feel more positive and constructive and inclusive,” that same member said.

Part of the difficulty with merging the tactics of the two groups is that SAGES treads a fine line between public and covert activism. A completely public image is not conducive to some of their more seditious tactics, because, as one member noted, there isn’t much benefit to an activist organization that completely plays by the book.

At the same time, attempting to remain private in their actions can undermine the voice of the organization. As one SAGES member mentioned, operating in such subversive ways has given some students the impression that the group is comprised of “radicals” or “anarchists.”

The truth is that both SAGES and The Positive are run by student activists on a mostly independent basis. While both groups rally behind certain messages, the execution of their tactics and the goals they set are largely determined by individual members.

Unlike most other school clubs, these organizations are not based on interests or hobbies, but on a firm position rooted in criticism and reform of Fordham’s administrative policies. That hardline perspective has earned SAGES a reputation for being “negative” among many students. However, SAGES is actively trying to work against that perception with their renewed energy this year. Whether or not they can repair that image remains to be seen, but until then, they have no plans to cease operating as a resource for those who see value in the services they provide.

Corrections, Feb. 20, 2019: A previous version of this article stated that Rachel Silang attended Fordham College Lincoln Center. She went to Rose Hill. In addition, the article now reflects a clarification of Fordham’s policies regarding the distribution of hormonal birth control. The article was also worded in a way that could indicate SAGES provides prescription birth control. SAGES is not a healthcare provider and does not provide any kind of prescription medication. Additionally, The Positive was founded in late 2014, not 2015, and language about its membership was revised.