To All the Boys I’ve Matched Before 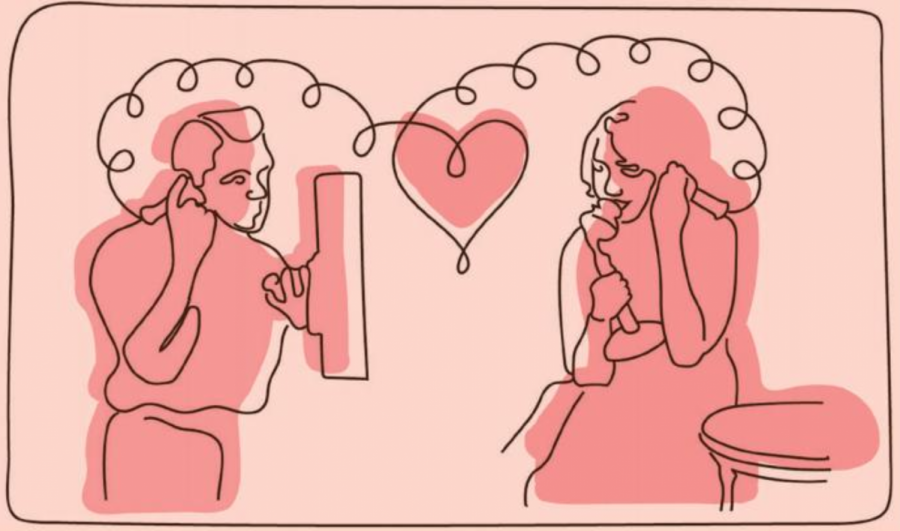 In every classic romantic comedy, all you needed for a successful romance was a job in journalism, to own a bookstore or to live in New York City. As an editor and a McMahon Hall resident, I have two of the tropes locked down, so where is my fairytale directed by Nora Ephron? It seems everyone in a relationship these days met on a dating app, a world I’ve never ventured into before. So I set out on my own “How to Lose A Guy in 10 Days” experience for the modern era, downloaded three different dating apps and started swiping.

The first app was, of course, Tinder — the pioneer of swipe culture. With a panel of my best friends, we meticulously chose the five best photos that made me look adventurous and attractive. Creating a compelling bio was difficult, but I settled on a Harry Potter reference. Others supplement their bios by connecting their Spotify profiles, but I opted out (Tinder doesn’t need to know how often I listen to One Direction). I set my preferences to a woman interested in men, lowered my distance settings to <10 miles and my age range from 19 to 23. Tinder reminded me to swipe left for “NOPE” and right for “NICE.”

I had nervously swiped left on dozens of people before deciding I was being too picky, and took a chance and swiped right on a guy who looked like Blake from the Bachelorette and had an obscure bio. My first match was exhilarating. I remember staying up the first night I downloaded the app, addicted to matching with people like it was a game.

I must admit, most guys on Tinder are just there looking for hookups, but most will either state it in their bio (“message for hookups only pls”) or will ask straightaway once you match. Besides weeding through profiles of “DTF only,” I stumbled across another issue — matching with someone from Fordham. With my distance setting set to <10 miles, it was inevitable that I would come across everyone I knew at Lincoln Center (I once matched with a guy while he was sitting across from me in Quinn Library, yikes).

My biggest issue with Tinder, just like our traditional rom-com backdrop of New York City, is all the tourists. Many times I matched with someone and had a really great conversation, but the next day their profile stated they were 9,000 miles away. (Thanks for telling me you were just visiting from London for the weekend, Daniel.) I enabled the Tinder U feature– which filters the profiles of university students – to find more people similar to me, but my distance settings were disregarded. My closest matches attended colleges in the Northwest.

I felt a little nauseated making snap judgments on whether I wanted to get to know someone solely based on their appearance. There was a moment I was chatting with several guys at once for the sake of “research,” and it felt like I was the Bachelorette. Conversations usually ended up going in circles because the guys I was messaging didn’t ask me questions back to keep the conversations rolling unless the question was, “Do you wanna come over tonight?”

However, I wasn’t going to give up. I’d heard of many happy couples who met on dating apps. Sitting down with one opened my eyes to a different side of dating apps that I would never think of as someone who identifies as a cisgender heterosexual female.

Peter Michalak, not yet out at the time, had downloaded Tinder just for fun. “I wasn’t actually looking for someone. I liked the attention I was getting; I downloaded it at the time that I started losing weight, so I needed to know if people thought I was attractive.”

Six months after downloading the app, he came across the profile of his now-boyfriend Sam Feathers, who had only joined Tinder a week before. Feathers said, “I wasn’t looking for something serious. I just wanted to meet people, even if we never dated, I just wanted to make friends.” It was Feather’s bio stating he was looking for someone to do fun stuff with and their similar taste in music that made Michalak swipe right.

They went to a concert on the first date. One month in, they made their relationship official — a seemingly rare happy ending to come from Tinder. But Feathers let me in on how Tinder is different for the gay community. “My straight friends would say, ‘You did Tinder wrong, you guys are dating now,’ but what else was I supposed to do? Like most things in the gay community, Grindr is more for hookup culture, Tinder is mainly for dating for us,” he said.

Michalak faced some difficulties when a match outed him to his sister. “I wasn’t out to everyone in my life before we were dating,” Michalak said. “He’d broken one of the sacraments,” Feathers chimed in. “That’s like a thing for gay people, if you see them on gay apps, you’re not supposed to tell people. There’s an unspoken rule.”

Michalak and Feathers will celebrate their first anniversary in March. Inspired by their story, I downloaded Bumble and Hinge, both dating apps that respectively proclaim to facilitate conversations and lead to relationships.

Bumble differs from Tinder by only letting women message first in straight matches. I loved this idea because it eliminated the “who will make the first move?” dilemma. A woman has 24 hours to message first, and the match, in turn, has 24 hours to reply back or the match disappears forever. When matching, Bumble discourages basic messages like “hey” and offers a list of conversation starters (“Which game show would you dominate?” and “First thing you do in the morning?”) if you try to type a short response. Still, I felt silly using these greetings and usually opted for “How are you?” I immediately noticed that my Bumble conversations were much more personal and entertaining.

I used the same pictures as on I did Tinder, but Bumble’s profiles are much more comprehensive. Along with uploading a maximum of six pictures, you have the option to provide demographic data, physical fitness, zodiac sign, education level, religion, politics, whether or not you want kids, what you’re looking for in a relationship and whether you smoke, drink or do drugs. Bumble also prompts you to answer three questions that range from which TV show you’d guest star on to how you define equality.

With so much information available, it was easier to start conversations with people I genuinely was interested in or avoid people completely if they had something on their profile that raised red flags. Despite the effort of making a Bumble profile, there were still plenty of men only seeking nudes while claiming their dream dinner guest was Susan B. Anthony.

Hinge followed the same profile concept as Tinder, asking for similar demographics and questions. However, on Hinge, instead of swiping right on someone’s entire profile, you choose one picture or answer to “like.” Profiles consisted of prompts like, “I pick the first half of the date, and you pick the second,” fostering more thought-provoking conversations. Hinge also gives your “Most Compatible” profile of the day. I also noticed that, despite my age range being 19-24, Hinge users tend to skew older, the majority of men being 25-28.

In general, I appreciated the conversation-based profiles more, but the biggest flaw is that there are fewer people on Bumble and Hinge in general. I had more Tinder matches overall because there were just more people to match with.

Swiping right on someone is one thing, but actually meeting a complete stranger is more nerve-wracking than finding out all of your secret love letters were mailed to your crushes. With shows like Netflix’s “You” and true crime dramas as popular streams, I only plucked up the courage to meet one of my Tinder matches because he was a friend’s coworker, and she confirmed he was harmless. We met for coffee, walked around Central Park and had such enjoyable conversations that I forgot it was a date with a stranger.

Although I was pleasantly surprised by how charmingly platonic this date was, not all of them ended like that. Aside from my first-date top from H&M and my lucky earrings, the vitals of my Tinder date survival kit are my pepper spray and the Find My Friends app. I never went on a date without my pink tube of mace and my location shared with all my roommates. Someone always knew where I was going and how late I planned on staying out.

When meeting people, trust your gut. One date started out really well, but I started feeling uncomfortable when he wanted us to go to his apartment (I always heed John Mulaney’s warning about secondary locations) so I texted my roommate for help. She called me with an emergency about our apartment needing to be fumigated for cockroaches, a fake phone call conversation we’ve used before when we need to get out of situations. When I hung up and didn’t respond to texts for a while, my other roommate called again saying the cockroaches were multiplying to make sure I was safe. I was able to leave without outright confronting the guy, which is also perfectly acceptable. If you ever feel unsafe or uncomfortable, don’t worry about being polite.

After giving my thumbs the workout of a lifetime by swiping right (but mostly left) on hundreds of profiles, I have yet to meet the romantic lead of the movie of my life. So, no, downloading an app doesn’t promise a Prince Charming to immediately find your glass slipper. However, I did get to have lots of entertaining conversations with and about my matches when I would debrief with my friends afterward. I still regularly talk to my first-ever Tinder match despite never meeting in real life. Although none of my Tinder dates led to anything long-term, going on dates was a chance to explore the neighborhoods and try new food all over New York with some pretty cool people.

Dating apps are becoming the new coffee shops, bars and bookstores in rom-coms — a way to meet new people. Sliding into your crush’s Instagram DMs is the new boombox outside your window, and swiping right on Tinder is the new meet-cute.